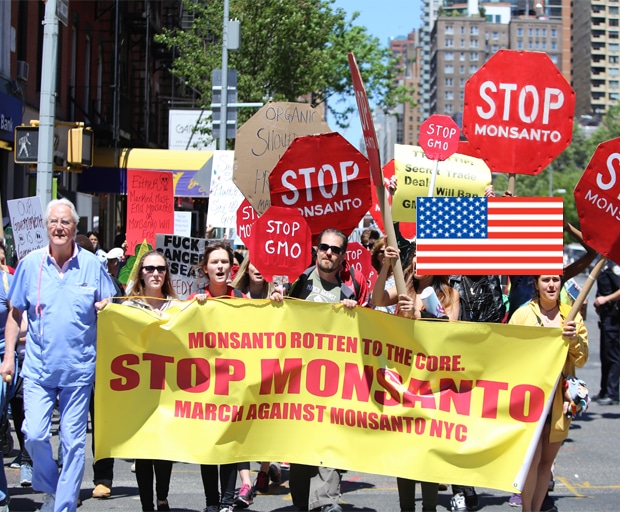 An upcoming trial could see the multinational corporation fined billions for damages.

It’s been announced that multinational agriculture company, Monsanto will face a trial for alleged crimes against nature and humanity including ecocide, in The Netherlands next year.

Set to take place on World Food Day, October 16, 2016, the trial is the result of several years of campaigning by global activist groups including the Organic Consumers Association (OCA) and Millions Against Monsanto, an international grassroots movement against Monsanto’s questionable use of potentially toxic chemicals and genetically modified organisms (GMOs).

Best known for producing GMO soybeans and corn used by major multinational food and beverage companies including Nestle, Coca Cola, Cadbury, Kraft and Schwepps, Monsanto’s use of GMOs has stirred controversy over ethical and safety implications for the past decade, in particular in regards to safety to the environment and to human health.

Primarily used for livestock feed, GMO soybeans are altered to include a gene that combats herbicides and are estimated to be found in up to 70 percent of food products in US supermarkets, including milk, bread, pasta and meat. Currently, the US is one of just a handful of first-world countries that don’t require GMO foods to be labelled as such, an action major biotech companies have spent millions lobbying against growing public demand to bring an end to.

Monsanto has attracted critics since its inception for many reasons besides its use of GMO seeds, including the use of dangerous Recombinant Bovine Growth Hormone (rBGH), an agent used to increase milk production in cows that causes painful health implications in the animals, and was banned in Europe and Canada because of the large amounts of puss and blood found in rBGH milk, which has been linked with inceased incidences of cancer.

The company also invented Polychlorinated Biphenyl (PCB), a toxic chemical it dumped by the tons in rivers all over the US before it was banned, causing persisting environmental damage, and is additionally responsible for bringing the US DDT, the pesticide used in Agent Orange, a powerful mixture of chemicals used by US military forces during the Vietnam War to eliminate forest cover for North Vietnamese and Viet Cong troops which famously caused skin burns, tumors, birth defects, rashes, psychological symptoms and cancer in the Vietnamese population.

Causing further outcry, in 2013, Monstanto used its government ties (Senator Roy Blunt has said he “worked with” the GMO seed giant) to have the Farmer Assurance Provision Act pushed over the line when President Obama signed to it in an emergency budget bill. Now colloquially known as ‘The Monsanto Protection Act’, the bill, which remained in effect until the end of the fiscal year in September 2013, exempted biotech firms from judicial review, meaning corporations like Monsanto could plant genetically modified seeds at will, even if a court of law ordered them to stop.

Relying on the UN’s Guiding Principles on Business and Human Rights, an international court will assess Monsanto’s potential criminal liability for damages inflicted on human health and the environment at its 2016 trial. It’s also understood the court will consider a possible reform of international criminal law to include environmental crimes, or ecocide, as prosecutable criminal offenses.

After announcing the imminent trial at the United Nations Conference on Climate Change this month, international director of the Organic Consumers Association, Ronnie Cummins said a hearing of this nature is long overdue.

“We are in Paris this month to address the most serious threat that humans have ever faced in our 100-200,000 year evolution—global warming and climate disruption. Why is there so much carbon dioxide, methane and nitrous oxide in the atmosphere and not enough carbon organic matter in the soil? Corporate agribusiness, industrial forestry, the garbage and sewage industry and agricultural biotechnology have literally killed the climate-stabilizing, carbon-sink capacity of the earth’s living soil.”

Comment: Do you think Monsanto should be made accountable for the potential damage they’ve inflicted on humans, animals and the environment?