Music legend Prince died at his Paisley Park residence in Minnesota yesterday morning. He was reportedly found unconscious on the floor of the elevator leading to his recording studio.

The cause of death remains unknown at this point, however it was known that the singer/songwriter had been battling the flu for the past two weeks.

Only one week ago, the singer gave his last concert in Atlanta, Georgia where he performed some of his greatest songs, with his legendary hit, Purple Rain closing the show – it would be his last performance ever.

The 57 year-old leaves a tremendous hole in the entertainment industry, having been one of the most influential and revolutionary artists of the 20th century. With over 100 million records sold, he is often referred to as the ‘Godfather of pop music’, not only through his own albums, but through worldwide hits he wrote for other artists, such as Sinead O’Connor’s Nothing Compares 2 U or The Bangles’ Manic Monday.

Celebrities have taken to social media to express their grief and share their sentiments about Prince. Madonna, who dated Prince briefly in the 1980s, wrote, ‘He Changed The World!! A True Visionary. What a loss. I’m Devastated. This is Not A Love Song.’

He Changed The World!! A True Visionary. What a loss. I’m Devastated. This is Not A Love Song. pic.twitter.com/x4JaSxRraC

Justin Timberlake explained the great influence Prince had on his career on his Instagram account, saying he remembers hearing a Prince song when he was only 4 years old and calling the singer a “once in forever artist”. 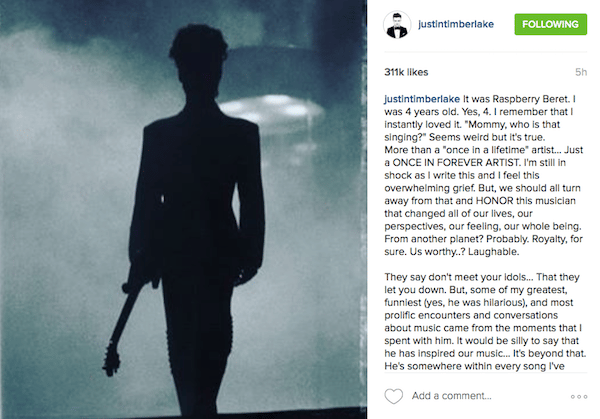 Britney Spears included one of Prince’s well-known and on point quotes, “A strong spirit transcends rules.”

Here’s to one of the strongest spirits the world has ever known ? We will miss you forever, Prince. pic.twitter.com/vEGAd0HLxS

Boy George expressed his shock and sadness over Prince’s death on Twitter calling it the ‘worst day ever.’

Today is the worst day ever. Prince R.I.P I am crying!

Even the President of the United States, Barack Obama, took to Twitter to share his thoughts about the singer saying, ‘Today, the world lost a creative icon.’

“Today, the world lost a creative icon.” —@POTUS on the passing of @Prince: https://t.co/MTb3nKxruRpic.twitter.com/gowq1MExM3

Prince is said to have recorded over 6000 unpublished songs, giving his fans hope that, despite his death, his music will live on.