They can scrape out your insides but can’t offer an Advil?

I was 17, in a fairly long-term relationship for that age (two years), and my periods that used to visit for 12 days at a time hadn’t come for a whole month.

I took a big gulp, hand shaking as I peed on the fortune-telling stick. What the heck was I going to do if it beamed ‘positive’? By my standards, and those enforced by my mother, abortion was only an option if I’d been raped, and I can tell you that was certainly not the case here. Sex was the best part of our relationship. Sure, he tried to be romantic, but he had such a temper that part of me knew he wouldn’t be part of my ‘forever’.

I shook the pregnancy test beneath me, then took a deep breath and lifted it out. Positive. Oh shit.

Who would I tell? Who would give me the right advice? Where do I go from here? My mother would cast too much judgment and tell me it was my responsibility to keep it. My boyfriend would get way too excited about the whole prospect – but I didn’t want kids. I had a career to pursue, actual dreams…

I see way too many lousy mothers out there, letting their kids run wild without control, trying to be their friend and instead setting no boundaries and offering no guidance to succeed in life. I was not going to be one of those women. At that age, I couldn’t even handle myself, let alone someone else. I knew when I became a mother I wanted to be highly successful, giving my children the kind of role model my mother was to me.

I did a Google search for abortion clinics in my area. I took down the details and cleared the history. I called and booked it in. I felt sick to my stomach, but I thought it was just the baby.

When I arrived at the place, there was a whole bunch of people standing outside. I’d had no idea there’d be such a long wait. It actually turned out they were protesting with signs boldly pronouncing things like ‘Babies are murdered here’ and ‘Abortion is homicide’. I could see their mouths moving, but everything was quiet and seemed to be going in slow motion. I lowered my head in shame – it’s exactly what I was feeling – and walked up the stairs to the clinic, where I thought I’d be safe inside.

I looked around at the other women sitting in the waiting room. A nurse yelled out from the reception desk: “Are you just spectating or are you here to have something done?” Even though everybody else was surely in the same boat, I was horrified.

God, that sounded so dumb. I literally said what I tell every salon I’ve ever been to.

“Have you ever had an abortion before?”

What kind of question was that? Like they’re something as common as manis and pedis?

And with that, she buzzed me away from her domain and I found a seat next to another woman. I gave her a nervous smile, she moved away from me. It was hell. But it was about to get worse. 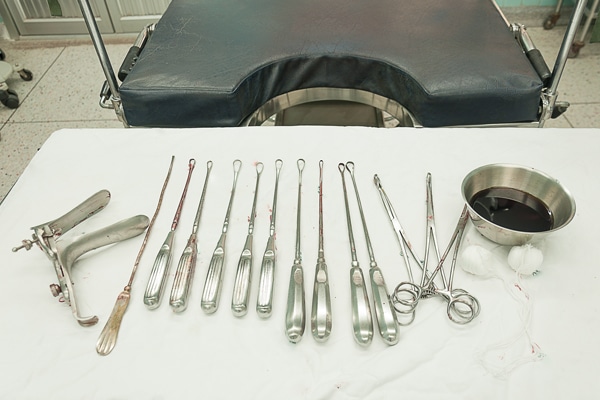 My name was called maybe 20 minutes later, and I was led to a stark white room where a nurse did an ultrasound to see how far along I was. She asked if I wanted to know whether it was twins or one baby, and if I wanted to look at the photos. I declined.

I was then taken to another room, with lots of big equipment (which I later found out was a vacuum), tiny tools and a bin. I thought I was going to be sick, so I tried to settle my mind, and before I knew it, I felt the general anaesthetic running through me. ‘This is it,’ I thought. ‘When I wake up, I’m going to…’

Drowsy, I tried to open my eyes. They were so heavy and I was in so much pain. One of the nurses noticed I was stirring and came over to me.

“We’re going to need you to get up. We need your chair.”

Chair? Wasn’t I in a bed? To the left and right of me were women fast asleep, slumped over in fold-outs.

“You’re in the recovery room, but you’ve been here quite a while,” she said.

“Can’t I just stay here a bit longer? I’m in a bit of pain. Do you have anything that can help?”

“Sorry, we aren’t allowed to hand out medication because we don’t know how different people will react to painkillers.”

Odd, I thought. These people can remove a fetus from you and scrape out your insides but can’t offer an Advil?

“We’ve put a maxi pad in your underwear, though, in case you start to bleed out.”

She helped me out of the chair and put me in a cab. And that was it.

That experience was the most horrific of my life.

People who stand outside abortion clinics making women feel even worse about making such a tough decision don’t realize we already get enough punishment inside, and in our own minds, for the rest of our lives.