Is it time we put down the remote and picked up some tickets?

When you work as an usher in a theatre like I do, you get paid to watch a lot of shows. I have seen probably 30 musicals in the last two years alone. All are extraordinary works of art; incomparable creative paradigms.

Unsurprisingly, watching the same show six, seven, sometimes eight times a week becomes a little…taxing. Nevertheless, even after seeing a show 200 times or more (not an exaggeration), the job remains interesting because of the audience. When theatergoers aren’t dropping their rubbish under the seats and mouthing off about the price of a water bottle from the bar (it’s a customer service nightmare), they’re reacting to what’s happening onstage. I’ve heard everything from, “This is the greatest thing ever!” to, “This damn show is a bad as Guantanamo Bay!”

However, one reaction sticks out. While I was manning the cloakroom after the show, a big, burly man arrived to collect his bag. He was under-dressed, hulking, rough, the very last person you would expect at a musical. My curiosity got the better of me, and I asked him how he enjoyed the performance.

“Yeah…I don’t usually come to things like this, but my cousin’s in the show,” was his response. I then expected a deflective, wry comment about how he would go to hell and back for his family. Instead, the man paused, and before I knew it, his eyes started to water.

“I’ve never seen anything like it. It – it kept making me cry,” he continued, his voice quivering as he fought back the tears. I was stunned, and felt my own eyes well up. This man had arrived preparing for the worst night of his life, only to find himself weeping over the profundity of this new experience. His life and perspective would never be the same; all it took was a trip to the theatre.

I grew up immersed in theatre. My parents are actors. I’m also a performer, and when I’m not performing or writing, I’m ushering. Needless to say, I take theatre for granted. However, that night I was reminded of how important theatre actually is, and of its slow decay in the face of cinema, expense, and most insidiously, Netflix.

Netflix is the nemesis of live theatre. It’s fast, it’s cheap, and it steals entire weekends out from under our noses. Who could blame us for watching 10 episodes of Orange Is The New Black in a row when the damn auto-play feature gives us only 15 seconds to grapple with our self control? It’s the crystal meth of television.

Our dependence on digital entertainment and neglect of live theatre is actually more harmful than most of us think. It’s no secret sitting still watching TV for hours isn’t good for us physically. It makes us prone to mindless snacking (usually on junk food), slows our metabolism, and negatively impacts circulation. Associate professor of cardiology at The University of Texas Health Science Center at Houston, and personal trainer, Dr John P. Higgins, sees the physical effects of Netflix binging all the time.

“I’ve seen young healthy people who have been laying around all day surfing the web or watching movies get blood clots,” Higgins says.

The University of Texas also discovered binge-watching Netflix is linked to feelings of depression and loneliness, and can actually alter your perspective of the world to that of the show you’ve been devouring. So if you’re a fan of American Horror Story, I suggest you keep a lid on it, unless you want to end up like Jessica Lange in Coven. 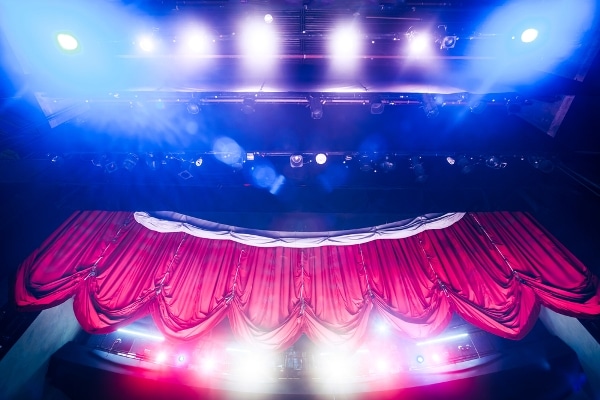 But not so with theatre. You’re looking at three hours max of high stakes, emotionally complex, culturally rich, raw drama with a convenient 20 minute intermission halfway through. You’ll make a physical effort to get to the venue, eliminating the harmful practice of sitting on your butt for an undisclosed period of time. And you’ll leave the show elated, not depressed; just ask science.

According to a study from the Norwegian University of Science and Technology, watching or actively participating in theatre actually releases endorphins, leading to feelings of fulfillment and satisfaction (take that, Netflix).

More to the point, you’ll experience a phenomenon intrinsic to the spirit of the human race. There is no better way to connect with our humanity than to watch a group of people right in front of us give every bit of their souls to tell a story, and share the same emotional journey. The collective energy of nearly 2000 people achieving this enlightened state at the same time is a heady combination of lofty, tangible, and ethereal. I know it well; I experience it every time I go to work.

However, with the rising cost of ticket prices as theatre companies react to declining interest, and the growing laziness of the general population as entertainment is handed to us on a silver platter, fewer and fewer of us are being exposed to the mysterious, extraordinary force of theatre.

Unlike in the days of Vaudeville, when live performance was the be all and end all, the inexplicably potent response theatre triggers is becoming a rare and exclusive thing.

I will always remember the tearful conversation I had with that burly man as I handed him his bag after the show that day. It made me reflect on how unbelievably fortunate I am to live in the theatrical niche. This rarefied little universe has made me the eclectic, eccentric, wildly confident person I am because it constantly gives me permission to be entirely uninhibited, both in emotion and deed.

So, next time you’re tempted to spend your Saturday on the couch mooning over nasty Netflix, scrounge some cash together and splurge on a rush ticket to a matinee. Take the plunge. Much like the dear man in the cloakroom, you’ll learn pretty soon how wonderfully worthwhile it is.

Comment: Do you go to the theatre, or are you on the Netflix bandwagon?

You Can’t Be What You Can’t See: Why I’m a Female Mentor

5 months agoSheSaid Contributor0
SHESAID is a top women’s lifestyle website that aims to inform, inspire and empower women around the world. Established in 1999, SHESAID is dedicated to telling it how it is, sharing real women’s stories about the issues that really matter to them. We know women because we are women.