Why You Should Never Use Hotel Soap

We’ve all been there: packing for our getaway, be it overseas or just a local mini-break, and trying to figure out whether we should take our own body wash with us or whether we should just use the one that’s supplied.

Well, after reading this article, you won’t need to think twice: pack your own soap.

Reason one is pretty simple. You never know if the hotel soap will smell nice/lather up the way you like/be big enough to last the duration of the trip.

Reason two, however, is a helluva lot less selfish: By leaving your hotel soap untouched, you’ll be helping prevent the spread of disease in third-world countries and, by default, literally save lives. Sounds a bit far-fetched, doesn’t it? Not so, says Shawn Seipler, founder and CEO of Clean the World.

“Since we began operations in 2009, the mortality rate of children under the age of five worldwide has decreased by more than 30 per cent – from 9000 child deaths down to fewer than 6000 per day,” reveals a proud Shawn.

Years ago, when he was a sales executive, Shawn used to spend four nights a week in a hotel. He used to leave the soap alone and use his own instead, thinking he was doing the establishment a favor by minimizing wastage.

Enter the revolutionary business Clean the World, which does exactly what its name promises.

“After learning that hand-washing with soap could potentially prevent the deaths of millions of children every year, I started thinking of ways that I could take these two million bars of soap and give it to these children dying every day from diarrheal diseases and acute respiratory infections, which are the top two killers of children under the age of five. I gathered some family members to help, and five of us started Clean the World in a one-car garage, literally scraping, melting and recycling soap.” 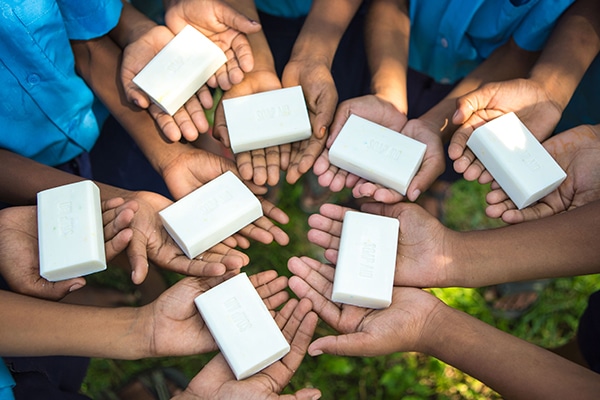 To date, Clean the World has distributed more than 40 million bars of soap to children and families in 115 countries. In addition, it has launched hygiene education programs in highly impoverished areas both in the United States and in countries such as Kenya, Tanzania, and Haiti.

Also in the business of saving lives is not-for-profit organization Soap Aid. Founder and CEO Mike Matulick says he is passionate about creating a positive change in the hotel guest supply industry, which his family has been part of for almost four decades.

“I have witnessed first-hand the waste in the hospitality industry, with hotels across Australia and New Zealand sending thousands of bars of partially used soap into overflowing landfill,” says Mike. “I founded Soap Aid with a vision to develop a clever and sustainable solution for hotel waste soap and save children’s lives through improved hygiene.”

Thanks to the support of Rotary International Clubs, Soap Aid has partnered with 500 hotels in the southern hemisphere to collect and recycle their discarded hotel soap, and every month more and more lodges are joining the program. And they’re one of the first to step up in an emergency, too. In early 2016, they sent 50,000 bars of soap to Fiji to support relief efforts after Tropical Cyclone Winston ravaged the country.

So do your part and pack your own soap – your conscience will thank you for it, and so will disadvantaged kids.