The latest instalment of Dove’s #ChooseBeautiful campaign is here and the beauty brand has once again focused on boosting self-confidence and reminding all of women that they are beautiful.

Released on Tuesday, the ad sees Dove place two signs above adjacent shopping centre doors – one marked ‘Beautiful,’ the other ‘Average’. The labels compelled women entering the building to consider how they view themselves and choose between ‘Beautiful’ or ‘Average’.

RELATED: How To Choose The Right Swimwear For Your Body Shape

Despite cultural differences and opinions when the women from London, San Francisco, Delhi, Shanghai and Sao Paolo were faced with the option, the majority headed for the ‘Average’ door. After passing through, each was interviewed and subsequently learned how such a simple decision highlighted their insecurities.

Interestingly, the ladies who perceived themselves as ‘Average’ questioned their decision: “I walked through the door that said Average and I didn’t feel very good after that because, obviously, I had rated myself that – nobody else.”

One participant answered, “It was a bit confronting to be honest… Feeling like you had to choose, and feel self conscious of how you perceive yourself, and perhaps if it lines up with how the rest of the world perceives you.”

The option to walk through either one of the separate pathways emphasised the purpose of Dove’s campaign, highlighting how the media portrays beauty and the negative effects it has on women’s opinion of themselves. One participant articulated it perfectly: “Beautiful to me, it’s too far out of reach. I chose Average.” 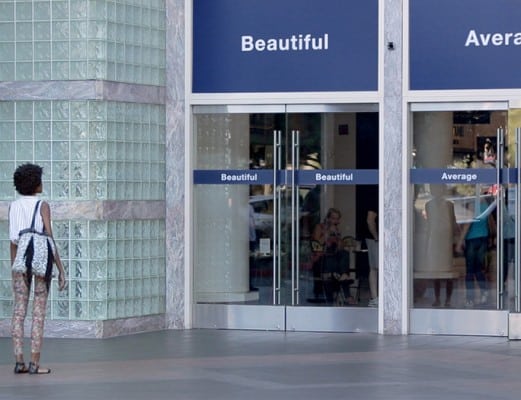 The campaign was conceived after Dove surveyed women and realised that an overwhelming amount where conscious about the way they looked – 97 per cent in the UK, 86 per cent in China, 72 in Brazil, 61 per cent in the US and 56 per cent in India all believed that they were not beautiful. In response, the campaign aim was to “encourage women worldwide to reconsider the choices they make about their beauty and how these choices make them feel,” according to Dove.

In contrast, those that did choose to walk through the ‘Beautiful’ door – some meekly and others with confidence – all did so with a smile on their face. It just goes to show the power we attain when we choose be beautiful. One young woman explained: “Quite a triumphant feeling – it was like telling the world that I think I’m beautiful.” Likewise, another said, “When I walked through that door, I felt someone beautiful looking back at me.”

Upon the release of the #ChooseBeautiful campaign, Dove stated: “We’ve realised something. We don’t have to wait for a new trend, or magazine, or person to come along and give us permission to start feeling beautiful. We’re women. We’re powerful. We can choose beautiful for ourselves. It’s not anyone’s right, but our own.”

The campaign is already resonating worldwide, being described as “inspiring” and “empowering”. People are taking to social media to show their support and underline their decision to #ChooseBeautiful.

If given the chance, what would you choose?

Most of the women who walked through the ‘Average’ door said they would reconsider next time: “Everyday I go through the average door, but yesterday was unique. I chose to go through the beautiful one.”

Dove’s latest campaign manages to highlight a powerful choice and how a decision can have such a positive or negative effect on how we perceive ourselves.

As one women says: “Beautiful is a great word, why not see what is one the other side of that?”

So when you woke up this morning, what did you choose?