This is the future of food.

Whenever I’m hungry, I tend to say “I could really eat a burger right now.”

Burgers are such a comfort food that hit all the right spots; rich meat nestled between fresh vegetables and soft buns, what’s not to love?

Well, the calories for one. And also the highly negative impact our red meat consumption has on the environment.

From the land, to the water and food for the cows, and not to forget the greenhouse gas emissions, your steak, mince, and burgers come at a high cost for Mother Nature.

So what if we could keep the taste, but change the ingredients?

That is exactly what New York restaurant Momofuku Nishi has achieved in collaboration with Impossible Foods, a food engineering company based in Silicon Valley.

Entitled the ‘Impossible Burger’ patty, the faux meat is a plant based alternative which includes the unique ingredient heme – a molecule typically found in meat and blood – in order to replicate the look, feel and taste of the real thing.

And according to the lucky peeps who’ve tried it, it tastes like the real deal.

“I tried it, and if I hadn’t been told what I was eating, I definitely would’ve been fooled,” one customer explained. 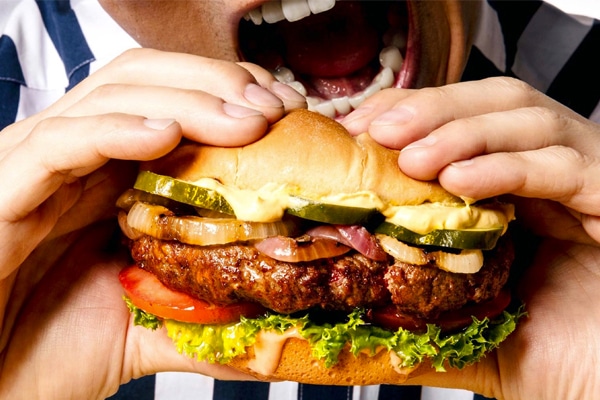 The biggest perk about this $12 high-tech burger, besides its health benefits and great taste, is its low environmental impact. As the patty is made from plant, rather than animal sources, it requires a whopping 95 per cent less land, 74 per cent less water, and releases 87 per cent less greenhouse gas emissions, according to Impossible Foods, so you can feel good about eating it in more ways than one.

And it’s stats like that that are hitting a nerve with the restaurant’s growing fanbase, as increasingly more people are becoming aware of the environmental impact of their food, whilst also wanting to fight animal cruelty, plus lead a healthier lifestyle.

On the first day of Momofuku Nishi’s special burger, hundreds of people lined up wanting to get a bite of the seems-too-good-to-be-true burger, making Momofuku Nishi the place to be for foodies.

If we can make ‘beef’ without raising cattle, just imagine what else might be possible in the near future. One day soon, the source of your meat might not come from a factory farm, but from a high-tech lab in Silicon Valley.

And the move towards reduced meat consumption is definitely a move in the right direction, when you consider these alarming facts: