It’s Not Cute To Be The Overly Jealous Girlfriend

I zoned out for most of it, as their bitching about high-school issues was making me wish I had those kinds of problems again, instead of the grown-up ones I was currently struggling with. But then, one of them said something that made alarm bells start ringing in my head.

“Oh my God, three different sluts wrote on my boyfriend’s Facebook wall for his birthday!” one of them exclaimed in as serious a tone as I’d expect to hear if she’d just found out someone killed a puppy. My other two cousins joined in on the horror.

“Bitches just don’t respect when a guy is in a relationship.”

Maybe I didn’t know the whole story, and there was some kind of history between the boyfriend and these Facebook girls I was missing, because I was shocked and confused at their intensely jealous and angry reactions at a simple Facebook message. I asked my cousin to read me the posts. They were totally innocent “Happy Birthday” messages. One of them may have included, at most, an emoji smiley face. I asked my cousin who the girls were, and she said they were just girls from school. I asked if they’d ever expressed any romantic interest in her boyfriend, and she said no. I asked what the big deal was, then, and all three looked at me like I was stupid.

“If a guy has a girlfriend, he isn’t allowed to have anything to do with other girls,” they said, matter-of-factly, as if this was as common knowledge. 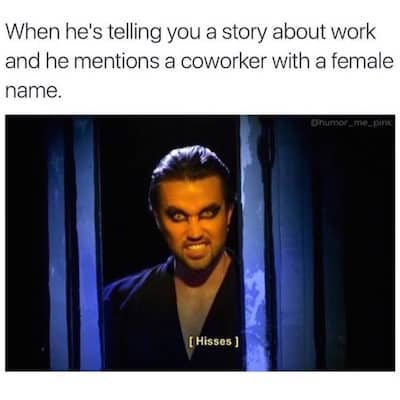 I watched the rest of this high-school drama unfold – a tearful phone-call to the boyfriend confronting him about the birthday messages and him promising to delete the posts. For the next half hour, my three cousins called the girls sluts and homewreckers, while I was too bewildered to speak. What they were saying was actually terrifying to me.

I was alarmed by the frequency with which these girls used the term “slut”to refer to other 15-year-old girls, and worried at the way they talked about what their boyfriends were “allowed” to do. They admitted to going through their partner’s phones, almost daily, to check up on what they’ve been doing. I was upset by how controlling and jealous they were about who their partners could be friends with, or have any contact with at all.

But the thing that truly terrified me was that this isn’t just an isolated incident. It’s not just that my cousins are in unhealthy overly-jealous relationships – it seems to be a dangerous example of what young girls today think a relationship is.

Part of why this troubling trend is normal and accepted is because of the sharing of memes and posts on social media, which are ultimately glorifying and romanticizing emotional, and sometimes even physical, abuse. 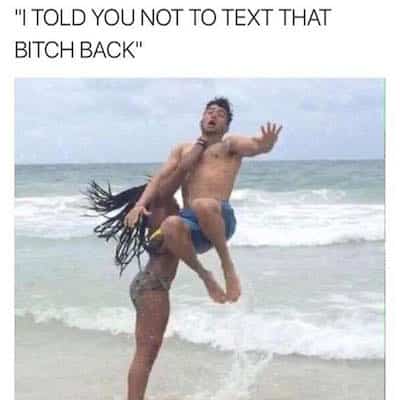 These memes are taking extreme jealousy and trying to make it funny, when it’s actually a form of emotional abuse and manipulation.

I hate to be the cranky old person sitting here saying “These young whipper-snappers are being influenced by the evil Internet memes.” I’d like to think people have the intelligence to understand that these memes are just meant to be lighthearted jokes and not taken seriously, but this is different.

One quick sweep over the comment sections on these posts and you’ll find people saying “This is literally me!” In my conversations with several young women, they honestly believe it is normal to be this jealous in a relationship. 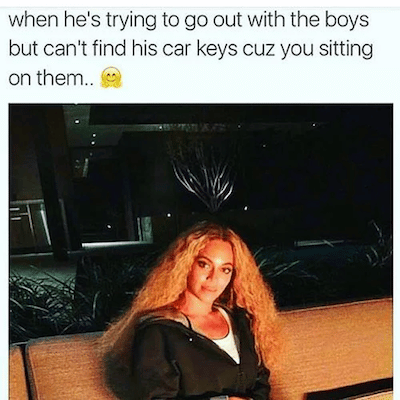 This is domestic violence. It’s abuse. And, unfortunately, it’s considered to be cute or romantic by a lot of the next generation of girls who are starting to date for the first time.

The tricky thing about emotionally abusive relationships is that you often don’t even know you’ve been in one until after you’ve left. My cousins think it’s romantic to want your partner to be with you all the time, or to want to be the only woman in his life – but people who are emotionally abusive often justify their behavior as coming from a place of love. That’s all part of the manipulation.

Jealousy isn’t an indication of how much someone loves you. It’s a sign they don’t trust you. Controlling what you wear, who you see, and when you see them isn’t a sign of caring about you. It’s a way to dominate you.

We always tell girls to watch out for this kind of toxic behavior because it’s an indication they might be in an abusive relationship – but it’s a two-way street. Women are just as capable of being emotionally abusive as men are.

I look at the girls who think this kind of jealous behaviour in a relationship is normal and I hope it’s just a phase, or an age thing that they’ll grow out of, because if they continue to act like this, they’ll likely never have a wholesome, fulfilling and trusting relationship – you know, all the things a healthy relationship should be.

If you can’t trust the person you’re with to not be messaging other people or remain faithful to you, you probably shouldn’t be with them.

I blame social media for this rise in unhealthy relationships. My cousins expressed major distrust in Snapchat in particular, because of the “one-time-only” premise of sending a video or chat that will disappear without a trace the second it’s opened.

As someone who has been in and survived a violent relationship with a lot of emotional abuse at its core, I’m still filled with an uncomfortable sense of dread and worry when I see posts shared on social media which spin abuse as just being a “bit of a crazy jealous girlfriend.”

I doubt there is a relationship out there which has never experienced the sting of jealousy at least once. Sometimes, jealousy rears its ugly head, and it’s an issue you need to work out, either with your partner or with your friends.

But being jealous that your boyfriend has a class with or works with another female, and expecting him to have zero contact with her is insane.

I ended up calling the older sister of my cousin. I talked to her in depth about her sisters’ behavior, and we’ve both been making an effort to teach our cousins how unhealthy their their jealousy is. And I think they’re starting to understand. I just hope other young girls get the message, too.

Comment: Are you concerned about the normalization of emotional abuse in the younger generation?