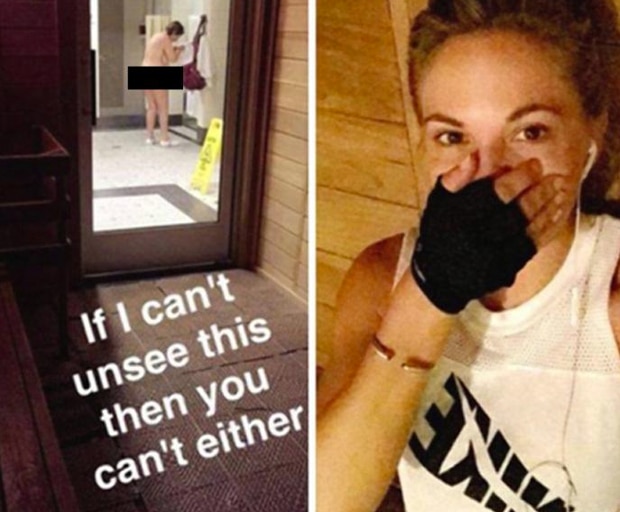 Being attractive doesn’t give you the right to shame other women.

Dani Mathers, who until recently I had never even heard of, has certainly made a name for herself this week.

While a handful of people will know her as a model and the 2015 Playmate of the Year, many more will now know her as the woman who took a non-consensual body-shaming photograph of another woman changing at the gym, posted it on Snapchat with a cruel caption and then gave a flimsy non-apology when she was caught out. In other words, a really shitty human being.

Historically, it has been men who have treated women’s bodies like commodities, but Mathers stunt just goes to show how far we have left to go as a sex when there are still women contributing to the degradation of our own gender.

The Snapchat Story in question was taken of an unsuspecting woman, along with a photo of Mathers’ face with her hand over her mouth, tagged with the caption: ‘If I can’t unsee this then you can’t either!’ Yep, a 29 year-old adult actually thought this was an acceptable action.

Dani Mathers is a woman who is famous because of how she looks, and instead of using her platform to promote body positivity, self-confidence, and self-love, she has chosen to take it in a totally different, incredibly immature direction. Her attitude reeks of the sort of highschool-level Mean Girls bullying I’d expect from a third grader who didn’t know better.

In highschool, this sort of psychological bullying is really common among girls, but eventually, most of us grow the fuck up and stop that juvenile behavior. Mathers must not have gotten the memo. She is a grown woman who needs to get her shit together and be a better person.

I was relentlessly bullied about my looks as a teenager. A group of girls edited photos of me by adding large amounts of body hair, then posted them online and made nasty comments about the size of my chest and my figure in general. I had Facebook pages made about me (thanks, cyberbullying) and rumors spread (thanks, small country town). All of this impacted me more than I can really describe. It has been more than seven years and I am still self-conscious about my looks and the things they said about me still bother me every day, a lot more than let on. And that was when 100 people were seeing these photos of me.

The woman snapped in Mathers’ photo has had her naked body plastered all over the internet, seen by millions of people all across the globe. This is a woman who was simply going about her day, changing at the gym. That is all she was doing. She was finishing or starting a workout, keeping healthy and doing something she should have been applauded, not shamed for.

Mathers’ did give an apology, but it wasn’t a very good one. She said there was no excuse for her behavior, that body shaming was wrong, and she was sorry for offending people.

“Women make my world go around, I respect women, I surround myself with women and I completely understand the magnitude of this post”, she added.

She might respect *some* women, but only if they fulfil her definition and standards of beauty and worth. People who truly respect other people don’t take non-consensual naked photos of them and sent them to thousands of other people.

Mathers has said the photo “was taken as part of a personal conversation with a girlfriend and because I am new to Snapchat I didn’t realize I had posted it”. I call bullshit again.

Even if we are to believe her convenient excuse, taking the snap as part of a personal conversation between two gossipy, bitchy women who think it’s okay to laugh at the naked bodies of other women does not make it any more okay. The only thing that changes in this circumstance is that she wouldn’t have been caught out if she’d thought to check her settings, meaning no apology would have been made and she would continue to judge people in private.

Dani Mathers can claim that she is sorry and that she made a mistake, and I acknowledge that people do make mistakes, but the fact is that she did a terrible, cruel thing that is totally not okay, and nothing is going to change that she did it.

I’m happy she is facing the consequences of her cruelty. So far, the ex Playmate of the Year has lost her job, been banned from all LA Fitness gyms and the case has been handed to the police, because taking a naked photo of someone without their permission is not only mean and creepy, but extremely illegal. She has also deleted her Snapchat, Instagram and Facebook since the event, probably because she didn’t like what people were saying about her, which is very ironic.

I feel for every woman who has been made to feel unattractive because of Mathers’ actions. Women are all beautiful, amazing creatures, and we should be lifting each other up, not dragging each other down.