Why It’s Okay To Cry At Work

Because sometimes you just need a good sob.

Unlike our predecessors of the Romantic era, be they Byron, Shelley, or Wordsworth, today’s pioneers of productivity have quenched the once championed fire of emotionality into near extinction. Whether it’s because we no longer attempt to understand each other, we can’t afford to deal with how time consuming displays of emotion can be, or we simply don’t care any more, sudden bursts of passionate venting in the adult world are beyond frowned upon; they’re considered a sign of weakness.

This is particularly prevalent in the work environment, where unsurprisingly, the taboo of crying seems to apply to women more than it does to men. And it’s not just coming from men. Women often caution other women to keep their internal roller coaster of feels in check. And fair enough, I mean, it’s hard enough in a male-dominated workforce to be taken wholly seriously, let alone giving the odd patriarch an excuse to say, “Oh, have you got your period again?” Just ask Donald Trump, he’ll tell you all about it.

Men, on the other hand, although still discouraged from allowing their tears to flow, are seen as passionate rather than irrational if they cry, because it’s considered a rare and thus more meaningful act. And there’s some scientific reasoning for it.

Biologically, women are more predisposed to bouts of crying than men, thanks to testosterone’s ability to potentially inhibit crying, while the hormone prolactin (seen in higher levels in women) can actually promote it. But our desire to let a tear slip when the shit hits the fan at work isn’t all nature. A study of people in 35 countries found that the difference between the frequency at which men and women cry may be less pronounced in countries that allow greater freedom of expression and social resources.

Many women are happy with the idea of not crying and proving themselves capable of acting like men in a traditionally male environment. It’s what we had to do in the 70s, right? Cut our hair short, wear pants instead of skirts, even don shoulder pads to make our frames look less vulnerable. 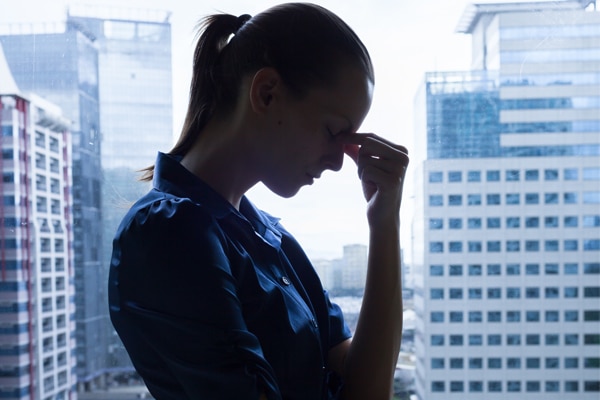 But here’s the thing about heightened emotion; it induces creativity, and leads to the most incredible internal and external discoveries. It produces extraordinary ideas; just ask any poet, novelist, painter, inventor, or political leader throughout history. You can change the world with a simple crying fit, plenty of people have. I mean, the act of crying itself releases endorphins, much like exercise. It is literally designed to make you feel better, Mother Nature’s comfort food, if you will.

In her groundbreaking book, Lean In, Facebook COO Sheryl Sandberg proposes rather than stifling our every emotion in an attempt to emulate men in the workplace we accept that sometimes crying happens, and it needn’t throw a spanner in our careers.

“[Crying] happens. It has happened to me. It has happened to me more than once. It will happen to me again. It happens to other women. Rather than spend all this time beating ourselves up for it, let’s accept ourselves. OK, I cried, life went on. And I think that’s part of the message of Lean In, like we are human beings, we are emotional beings and we can be our whole selves at work,” Sandberg says.

I’m somewhat of an enigma when it comes to the workplace. I flit in and out of the theatre industry, and when you’re in a rehearsal room, the emotional energy is like nothing you’ll find anywhere else. Tears are an inevitable byproduct of acting. Performers are not only allowed to cry in the workplace, they’re actually encouraged to do so.

Releasing the pent up, anger, fear, or that feeling you can’t quite put your finger on leads to better acting, which is equivalent to better performance in a corporate environment. As such, why on earth shouldn’t we apply rehearsal room principles to other workplaces? I’ve done some of my best work, performing or otherwise, during or after a massive fit of tears. The catharsis crying facilitates is astronomical; don’t underestimate its value.

So let’s all forget the stigma, the rules, the quest to quell any potential ‘weakness’ we might have. I’m not saying we should burst into heaving sobs every time the coffee machine stops working, but if you feel particularly emphatic about something important, why not let a few tears slip? It will clear your head and allow new ideas to flourish. If we allow our emotions to take over once in a while, you never know what may be in store.