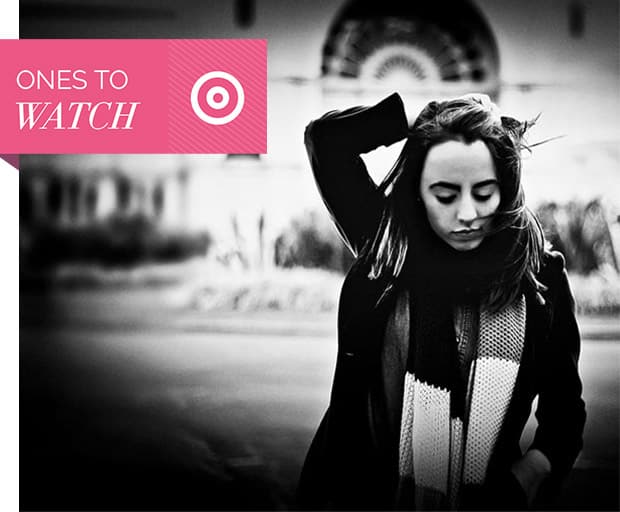 Everybody is on the hunt for young up-and-comers and here at SHESAID we have been lucky enough to meet a selection of them. These ladies are on the road to success and generating waves within their chosen field. Whether they be creatives, sporting talent, founders of start-ups or someone striving to make a real difference, these young women are definitely ‘Ones to Watch’.

At the tender age of 22, singer/songwriter Gordi is not your average musician. With brains to match her talent she studies medicine full time, however it is music that has really stolen her heart. Born and raised in country NSW, the now Sydney native is creating talk within the music scene. Featuring in March as a Triple J Featured Artist, there is no denying that Gordi’s unique and ethereal sound is taking her places. This week we managed to find a spare moment in her busy schedule and see what she’s been up to.

Tell us a little bit about you. Where are you from, what is it that you do?

I’m Gordi, a Sydney based singer-songwriter. I’m originally from a little town called Canowindra where I grew up on a farm called ‘Alfalfa’. I’ve always loved writing and playing music but released my first single “Nothing’s As It Seems” at the end of last year and since then music has become more like a career than a hobby (albeit financially it looks more like a hobby than a career).

When did you discover your talent? What made you want to follow it into a career?

As soon as I knew what words were I started to sing, and along the way I picked up guitar and piano. In high school I sort of found my feet in terms of performing and absolutely fell in love with it. There’s no other feeling like playing your own original music to a crowd who wants to listen.

In a word – folktronica (please excuse the wankiness of that term). The production we’ve explored for my tracks has combined acoustic instruments with more synthesised sounds with the main focus on the vocals.

As a singer/songwriter, where do you find your inspiration?

From personal experience. As a songwriter you really have to abuse your own emotions. If I’m feeling upset or angry about something I make myself sit down and channel that into a melody or lyrics. If my life starts is going through a mundane or uninteresting patch then I turn to film and poetry. Anything can trigger an idea and then you just have to let that idea take hold of you and lead you where it will.

Who has had the most impact on you as an artist? Do you have a mentor?

Musically my two main influences are The Tallest Man on Earth and Asgeir whose styles of music and writing have really inspired me. Megan Washington and Missy Higgins are two people who I see more as mentors as they are two female artists that have really shaped the musical landscape in Australia and have had such an impact on me and my interest in pursuing music as a career.

What have been your stumbling blocks, initially getting started and since then? How did you overcome these?

My main stumbling block has been trying to balance music with uni and the rest of my life which I’m still overcoming. The course that I’m studying at uni is quite demanding and music is becoming more so, so it’s hard to give 100% of myself to everything all the time. I’m just taking it as it comes and I have a great support system with my friends and family so just make it work. Though unlike other musicians who are getting drunk before shows, I’m often whipping out my laptop to do a few readings. Rockstar or what.

The music business is known for being cutthroat and a hard industry to crack. How do you deal with the pressure to continually create, preform and impress?

I have to constantly remind myself why I have chosen this career, and that is because I love writing music and performing it. Occasionally I get too caught up in trying to write something that other people will like it that will fit a mould, but the best songs are always the ones that I write without an agenda. It is a tough business but I’ve had some great fortune so far and enormous support from people and organisations whose opinions I really value. The deeper in you get, the more the pressure seems to build, but who doesn’t love a bit of pressure!

What drives/motivates you to keep going?

Outside of music what do you get up to?

Between music and uni, I find I don’t have an abundance of free time, but when I do I spend it catching up with friends or heading home to Canowindra to see my family.

What are your plans and goals for the future? For instance, where do you see yourself in 5 years?

Hopefully I’m onto my second album by then! My main goal is to build up a bit more of a fan base, get a few music festival slots and work towards putting out an album. In between now and 5 years I’d love a few international tours too but one step at a time for now!

18 Quotes From Extraordinary Women To Inspire You Today