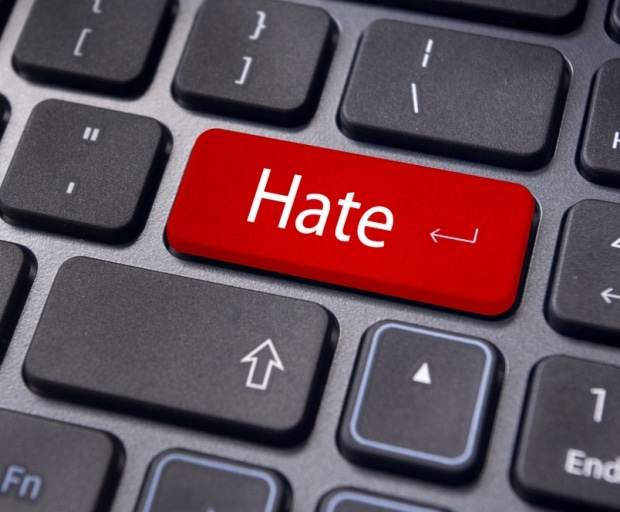 “If I ever saw you I would put you back in your place with a swift backhand.”

The internet is the last true forum for freedom of speech. As a confident, outgoing person, I take full advantage of that. However, being outspoken online has its drawbacks. You’re going to cop some hate. Particularly so, if you happen to be a woman, as Australian journalist Clementine Ford learned recently.

Known best for her sparkling intellect and unapologetic feminist writing, Ford received a barrage of online abuse to her Facebook fan page that included explicit threats of sexual violence and murder this month as a result of writing about reporting a man to his employer for calling her a slut.

‘The reason for this latest influx [of abuse] is because I reported a man for directing an abusive comment to me to the employer he had listed on his Facebook account (which also included an assortment of vile racism). The man’s employer elected to investigate and made the decision to terminate his contract. They asked me to share this news with my followers, which I did,’ Ford wrote recently.

The man Ford reported was Michael Nolan, a reader who posted the comment, ‘Slut.’ in response to an article in which Ford had highlighted poor online conduct by publishing a screenshot of another reader who’d commented, ‘She’d jibber less with a cock in her mouth’.

As such, Ford did the responsible thing of reporting a truly undesirable man to his employer, who discovered a theme of similarly discriminatory posts on his Facebook page and, unsurprisingly, fired him. That’s a fairly normal and reasonable scenario in the real world. The online trolls didn’t seem to think so. Over the next 24 hours, she fielded reams of atrocious abuse, condescension, and misogyny from disgruntled male followers, who took it upon themselves to put the journalist back in her place by threatening her with comments including:

“You are a stupid whore Clementine Ford. If I ever saw you I would put you back in your place with a swift backhand. I sincerely hope I run into you one day.”

“You need a big stick in your holes to loosen up the feminism turd you have for a brain.”

And, “I’m calling you ugly, old, used up, washed up, dried up, expired, ho-bag hag slut, who is too damn ugly for any guy to be attracted to anyways and it ain’t jack sh*t you can do about it because I’M SELF EMPLOYED UGLY PIG SKINNED C*NT. And f*ck off!”

And Ford’s sadly not alone. In August, media freedom representative for the Vienna-based Organisation for Security and Co-operation in Europe (OSCE) Dunja Mijatović called attention to the fact that female journalists, and other women who express opinions online, are subject to, “A disproportionate amount of gender-based threats and harassment.” In fact, it’s estimated women face up to three times the abuse men face online.

In October, Australian Muslim TV personality Susan Carland launched an anti-troll campaign after receiving abusive tweets from thousands of followers, and earlier this year, actor Ashley Judd vowed to press charges after being physically threatened online, tweeting to her followers, ‘When I express a stout opinion during #MarchMadness I am called a whore, c—, threatened with sexual violence. Not okay. And by the way I’m pressing charges.’

In an effort to highlight the prevalance of online abuse against female personalities, last year Mic Video released a clip of women reading out some of the daily abuse they face online. The gendered focus on slut shaming, death threats, and the promise of sexual violence is a frightening theme throughout all the tweets.

As a female journalist myself, I pride myself on confidently expressing my opinions online. And while I don’t have the huge followings of women like Judd and Ford, I’m sadly all too familar with the abuse women face online for daring to speak their minds.

During a particularly turbulent political time, I decided to post an article by a very widely read and respected journalist, and accompanied it with a wry comment and snappy hashtag; #stopwhining. Was it a sting? Yes. Was it designed to provoke? Abolutely. But did it compare to the diatribe of ill-thought-through rubbish permeating my feed from the opposing side? Definitely not. Sure, I expected some dissent. I expected a heated battle. But what I got was the most atrocious online bashing I have ever received.

I was called an idiot, a princess, a nit-wit, a bitch, an ignorant elitist snob, and a delusional twat. I was told to ‘shut up’, to ‘stop being so aggressive’, and that I couldn’t see out of my ‘privileged little bubble’. These commenters insulted my intelligence, my education, my upbringing, my moral compass, and accused me of having no values. All because I dared to express an opinion different to theirs.

After the storm died down, I brought up the post again and scrolled through the 70 plus comments, trying to find the answer. How could 14 words and a silly hashtag cause so much offense? Suddenly, it hit me. It was obvious as a sledgehammer to the face. All the most condescending, offensive, and downright insulting garbage I’d received came from men.

I often wonder if I’d been a man, if my fairly inconsequential post would have garnered the same reaction.

Unfortunately as a female journalist, it’s unspoken law that as my career progresses I should expect the abuse to get worse. If you’re intelligent, outspoken, qualified, and female, you are inevitably cannon-fodder for the pungent proletariat. But why should we be taken down or silenced because our stepping up to the plate makes men insecure? Or cheat the world of what we have to offer to the conversation? Difficult as it may be, the biggest stand we can make, is to continue to let our voices be heard, because what we bring is far too valuable to waste.

Comment: Do you agree there’s a disproportionate amount of abuse and threats against women online as compared to men?