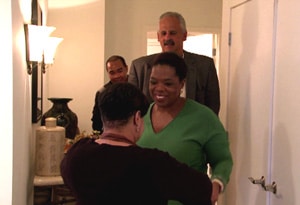 She’s spent 25 years uncovering family secrets, but now Oprah has revealed one of her own. “It’s a bombshell secret that left me speechless,” she said.

The talkshow queen has revealed that she has a half-sister that she found out about in November 2010.

Patricia was born in 1963 and immediately put up for adoption by Oprah’s mother Vernita. She went from foster home to foster home before being adopted at the age of 7. Patricia always wanted to know her birth mother, and in 2007, as a single mother to two teenage children, pursued her birth records. She discovered she had three older siblings, two that had passed away, leaving one sister.

“[I thought,] ‘I can’t wait to meet her because she’s probably down there cooking up a storm and has about 10 kids,'” Patricia says. Little did she know that sister was Oprah!

For three years Patricia had no idea what to do with that information – just how do you approach one of the world’s most famous and richest women? On top of this Oprah had no idea that her mother had given one of her children up for adoption. She was nine at the time and living with her father in another state.

Sadly Vernita refused to meet with Patricia, and it was after another coincidence that she met other biological family members, took a DNA test and was assured they were family. Finally Vernita confirmed to Oprah that Patricia was her half-sister.

On Thanksgiving Day in November, Oprah and partner Stedman Graham drove down to Milwaukee for one hell of a reunion! They spent the afternoon getting to know each other. “She’s so sweet,” gushes Oprah.

Just weeks ago Oprah and Patricia visited Vernita, who is still dealing with the shame of giving her daughter up, but says she did it so she could get off welfare and provide for her other children.

Oprah admits she is full of admiration for Patricia not selling her story to the press, especially considering her older sister sold another bombshell family secret to the press 20 years ago. When Oprah was 14, after years of abuse, she gave birth to a premature baby who died shortly after in hospital.

Oprah and Patricia are still getting to know each other, dealing with the shock but moving forward in building a relationship with the extended family.