Our System For Dealing With Sex Offenders Is So Broken, It Hurts

How many times are we going to let rapists reoffend before we decide enough’s enough?

Through the recession in the late 2000s we all took on some odd roles. We weren’t concerned with jobs within our field so much as jobs that paid us on a regular basis with checks that didn’t bounce. That’s how I found myself working as an office assistant in a psychology clinic that focused on the rehabilitation of sex offenders.

Every client there had court mandated appointments, ranging from group therapy to plural individual sessions a week. I learned tons about our healthcare system, how it treated sex offenders and how the term sex offender was applied. There were absolutely some men (and women) there that shouldn’t have been. One man was there because he’d been 19 when he’d had sex with his 16 year-old girlfriend – his girlfriend’s mother reported them and now he carries around the same label as a child molester for the rest of his life.

It also taught me that serious offenders often get off with a lot less than that man did.

There was one member of the clinic who was a repeat visitor. He’d been in and out of our offices several times over the years and his files were thick. While most of the patients were very careful to abide by every rule and boundary, this guy did everything he could to push and test them; anything from asking us to do his personal errands to reaching over the desk to grab a pencil, to actually stepping uncomfortably close with a crooked grin – he knew exactly what he was doing. And he loved it.

One of the doctors told me once that they were fairly convinced that the guy wasn’t salvageable, but he kept getting released and given mandated therapy anyway. And he always reoffended.

Reoffended. It’s such a soft word for what we’re talking about, isn’t it? He’d always rape again. He’d always rape children again. He’d always abuse and permanently scar children again. Yet he was given the opportunity many people accused of nothing worse than possession charges will never see – repeated second chances. Because we live in a world where sex is prized, women are devalued, and men who are raped are repeatedly accused of being some slur that relates them to women. 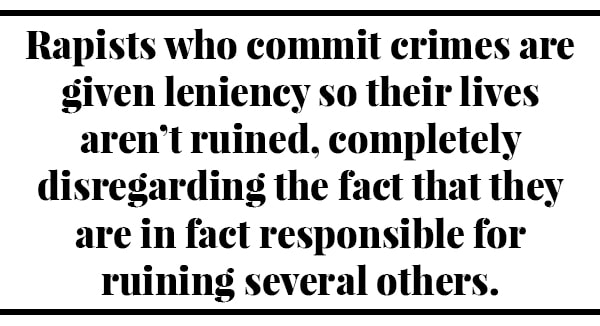 Rapist Brock Turner was released last Friday. His case had two witnesses. The fact that he committed the crime isn’t even being disputed. What is a factor, apparently, is how sad his life is now. Poor him. He got a whole six-month sentence and he only had to serve half of it. After that he’ll be serving a whopping three months of probation – a whole three months where he’s not allowed to get caught committing a crime. Or if he is caught, he’d better make sure he gets another judge that loves white boys and hates women as much as his last one did.

He also has to register as a sex offender, though the restrictions as to what he does and does not have to do insofar as psychology appointments, check-ins with his parole officer and any additional restrictions, vary greatly. Postcards will be mailed to his neighbors alerting them to the fact that they’re living near a sex offender, but that’s it. Unless he’s really unlucky. His parents might not even let him have dessert when he gets home.

We have a problem with the way our system deals with sex offenders, but it’s way more complicated than it looks on the surface.

Rapists who commit crimes are given leniency so their lives aren’t ruined, completely disregarding the fact that they are in fact responsible for ruining several others. With Brock Turner hitting the streets, given what I know about sex offenders who have had it proven to them time and time again that there are few if any consequences to committing rape, I can’t help but wonder if he’ll turn out like that guy at my clinic.

I wonder whose space he’ll be challenging next. I wonder who he’s going to rape next. Because he will. The only question is how many times we’re going to let him get away with it.

Comment: What do you think needs to change with the way the justice system handles sex crimes?