Passengers Thrown Off A Plane After Confronting Ivanka Trump

“Your father is ruining the country.”

Two passengers were removed from a JetBlue flight before takeoff at JFK airport after allegedly harassing Ivanka Trump, who was traveling with her husband and three children.

Brooklyn lawyer, Dan Goldstein, and his husband, Matthew Lasner, spotted Trump and her family in the terminal before the flight and tweeted their plans to confront Trump about her father.

“Ivanka and Jared at JFK T5, flying commercial,” Lasner, who is a professor at Hunter College, tweeted before they boarded the morning flight. “My husband chasing them down to harass them,” the tweet continued, followed by the hashtag #banalityofevil.

According to TMZ, Goldstein made a comment to Trump as he passed her in the main cabin while passengers were still boarding.

“Your father is ruining the country,” a passenger alleges Goldstein shouted at Trump, who ignored him and distracted her children with crayons. “Why is she on our flight? She should be flying private,” he continued.

As JetBlue staff escorted the passenger and his husband off the flight, he said “you’re kicking me off for expressing my opinion.”

After the incident, Lasner claimed his husband calmly expressed displeasure about having to fly with Trump, which “JetBlue staff overheard, and they kicked us off the plane.” All of the tweets have since been deleted. 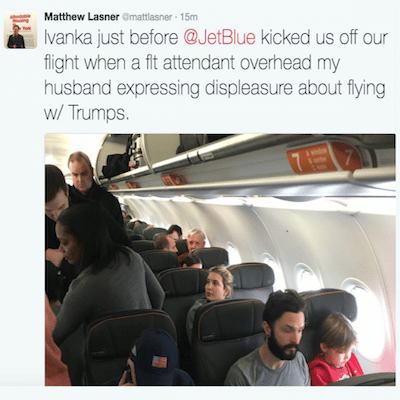 JetBlue has addressed the incident in a statement.
“The decision to remove a customer from a flight is not taken lightly,” said a JetBlue spokesman. “If the crew determines that a customer is causing conflict on the aircraft, the customer will be asked to deplane, especially if the crew feels the situation runs the risk of escalation during flight. In this instance, our team worked to re-accommodate the party on the next available flight.”

A man who claims to have been sitting in front of Trump during the incident posted an account of what he saw happen on his personal Facebook page.”He didn’t accost her directly. When he got on and saw her, sitting behind me, he said “Oh my god. This is a nightmare,” and was visibly shaking. He said “they ruin the country now they ruin our flight!” He did not yell. He was also not what I would describe as calm. Agitated maybe,” the post explains.

“When the JetBlue staff went back to speak to the man I overheard Ivanka say to them “I don’t want to make this a thing.” My assessment is that she was happy to let the man take his seat. Security made a different call, and for good reason. The man’s calm husband had tweeted earlier that his husband was “chasing them down to harass them.” I did not witness his actual removal some rows back. If he screamed, I didn’t hear it.”

Members of the Secret Service were on board with Trump, who has had threats to her safety made against her since September, but didn’t intervene during the incident.

Trump has been having problems with people who oppose her father for months, even before he was elected President. In October, a boycott was called against her clothing line in the hopes it would pass along a message to her father.
Image via Twitter

Comment: Do you think the man was justified in confronting Ivanka?