There’s a certain stigma about having sex on your period.

Even in 2015, we get squeamish over menstrual blood…although how it’s any grosser than semen I will never understand.

The stigma is (generally) perpetuated by a complete unwillingness to accept or actually investigate the natural functions of the female body. A woman’s period is the reason human life exists, yet there are way too many ugly myths attached to periods, and period sex.

RELATED: Having Sex On Your Period: Oh Yes Or No Way?

Harvard graduate Kiran Gandi recently caused a stir by running the London Marathon without a tampon, allowing her menstrual blood to drip down her legs.

“I ran with blood dripping down my legs for sisters who don’t have access to tampons and sisters who, despite cramping and pain, hide it away and pretend like it doesn’t exist,” Gandi stated afterwards.

“I ran to say, it does exist, and we overcome it every day. The marathon was radical and absurd and bloody in ways I couldn’t have imagined until the day of the race.”

Portland artist Sarah Levy also drew gasps when she famously painted Donald Trump’s face in her artwork entitled ‘Whatever’ with a tampon soaked in menstrual blood, as a protest of Trump’s sexist comments regarding Fox host Megan Kelly, who was tough on Trump during the GOP debate.

The fact that a grown man can’t say the word ‘vagina’ is definite cause for concern. The fact Trump found it acceptable to publicly degrade a woman based off of a natural bodily function like menstruation is even more so.

Every single woman that ever existed, exists now, or will exist, is biologically programmed to menstruate. Your mother had a period, otherwise you wouldn’t be here. They shouldn’t be taboo, disgusting, or shameful; menstruation is one of our most necessary primal functions.

Considering this, attaching a dirty stigma to periods is just laughable. More to the point, the idea that having sex on your period is a complete no-no is not only misguided; it’s actually detrimental. There are a lot of health benefits associated with period sex, and it can certainly relieve the cramps, headaches, mild depression, and irritability that tend to (unfortunately) go hand in hand with periods.

The misconception that having sex on your period is somehow dangerous or unhealthy has also been royally debunked by doctors.

“If the patient is comfortable with it, then it’s great to continue having sex throughout the month and not have to take a break. It’s perfectly natural and safe for both partners,” emphasises Tara Ford, a physician assistant at the Medical Centre for Female Sexuality in New York.

Get the picture? Period sex is not only safe, it’s actually good for you. If you’re still not convinced, here’s why. 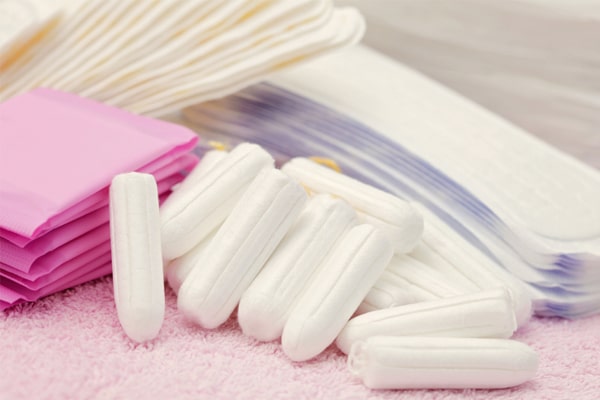 We’ve all experienced those cataclysmic cramps when your red river is running. I often end up unable to move; curled in the foetal position, clenching my fists and praying that the prescription painkillers for severe migraines I pinched from my father will hurry up and kick in.

A quick turn of the horizontal tango actually works wonders for relieving the pain. Contractions of the uterus offer a kind of internal massage, plus orgasms release endorphins, which are natural painkillers and mood boosters. Using sex to control period pain sounds pretty good, right?

It’s not actually that messy

Okay, I get the fact that the prospect of bleeding all over your good Alex Perry sheets doesn’t sound that appealing. But think for a moment; just how much blood is there, really? Over the course of an entire period, the average woman excretes just two tablespoons of blood. Yep, that’s it. That’s about the amount of cough syrup you would gulp in a day when you have a bad throat.

And if you’re really worried about your bed looking like a crime scene after a bonking session, put an old towel down, have sex in the shower or wear a menstrual cup. Easy fix.

Firstly, the feelings of fullness in the pelvic and genital areas provide a sort of head start to arousal. Secondly, the increased oestrogen leads to an increase in the intensity of your orgasm (yay!). And thirdly, it can actually be more enjoyable for your partner. The extra lubricant provided by the blood, plus the extra warmth and fullness of your vagina generally makes sex a whole lot easier.

The same precautions of everyday sex must be observed during Aunt Flo’s visit. Because your cervix is more open and relaxed to let blood through, you are much more susceptible to STIs and STDs. Make sure you use a condom, which will also help with the mess. And although you are much less likely to get pregnant on your period, it is still very possible.

In short, you shouldn’t be afraid of period sex. Any consensual sex you’re having with your partner is fabulous. Why would you deny yourselves that pleasure because of a few (and it is only a few) droplets of blood?

Confession: I’ve never had sex on my period. I’ve never really considered it. Before I began writing this article I believed all the misconceptions, and read into the fear of gallons of blood flowing out of me onto white sheets. But I’ll admit, after seeing through the stigma…I’m kinda keen to try it.