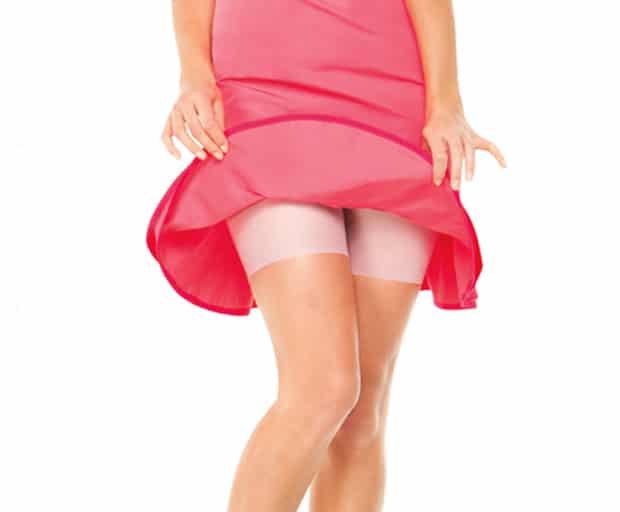 Women pay 200 dollars to wear a beige body suit under their clothing. Basically it sucks the fat in or as women tell themselves, ‘smoothes out the skin’. If you put your arm around a woman wearing one, it feels like there is a thick bandage under her dress. That’s when her head spins round, because she knows the jig is up and she blurts out, “I’m wearing Spanx!”

I don’t care what women do to their bodies if it makes them happy. But Spanx denies us the pleasure of seeing what real bodies look like and that is too bad. Have you ever had a man tell you he thinks the fat around your belly is delicious? He wasn’t lying to you. I remember the first time I saw a woman with a little pot belly on screen was in the French film, Betty Blue. I was a teenager who thought only perfect beauty makes sex ‘sex’. A man had his head between her knees and as she gripped his hair, I thought ‘she’s got fat on her stomach and he hasn’t thrown her off the bed in disgust and walked out. How can that be…?’

I once had a boyfriend suggest I do something about the little mound of wobbly flesh on my stomach. He wasn’t lying, either. That’s the thing I’ve noticed about men, if you asked ten of them if your bum looks big in those jeans, you’ll get the same response, ‘of course not’, but they are having ten private thoughts. Based on the various things I have heard men and lesbians say over the years, I can only conclude people’s preferences are based on a kaleidoscope of memory/mummy/media-images…and how they feel about the words coming out of your mouth.

‘I like a woman with fat on her arms…I am not a boob man…I like it when they are so ripe, they’re bursting out of their clothes…Large breasts intimidate me…She has to be skinny, because I’m fat…She has the most beautiful breasts I’ve ever seen and I’m not a boob man…She has great glutes and over-developed trapezium…’ Okay, this last comment was said to me as I walked in front of a perfect stranger. I said thank-you, because the attention to detail seemed flattering. Then I went home and looked up ‘over-developed trapezium’. Not really a compliment.

If you’ve ever been to a Korean baths, then you have seen the moving tableaux of what women really look like. Hips and breasts and cellulite and flesh everywhere, dipping in and out of the pool. I remember seeing a woman with so much hair – it looked like a black Pomeranian had bitten her pubic bone and stayed there. We don’t get to see these shapes in magazines or on television because actresses wear Spanx. Every single one of them. Yes, even her. And her. They are moving product and they understand the job description. They can also be found at charity events liberating women from the oppressive Hijab, whilst shallow breathing in their Spanx.

My concern is – could Spanx bring the animal kingdom to its knees as people take home a skinny and find out she’s a boom-boom? The banging and wrestling sounds from the bathroom, as she tugs the body suit off and stuffs it into her purse might be the give-away. The problem here is the guy who went out looking for a big-bottomed beauty walked home empty-handed and now boom-boom is in the double-bind of having to pretend she’s a skinny, without any clothing on. I believe you can ‘think yourself thin’ but not five self-hating minutes in a dude’s bathroom. She fudged the details a little and hoped he wouldn’t mind. But in that fudge, denied herself the chance to find someone who loves her body as it is.

Instead of thinking the entire sexual mating game is getting played out on your torso – I hope women realize the pre-occupation with perfection is a much bigger turn off. It might be the moment he put his hands on your hips and discovers the surgical bandage. What we really respond to in other people is their self-esteem. We see them as they see themselves, for the most part. And self-esteem is one of those things that is hard to get and easy to lose. Personally, I have found the very best way to develop self-esteem is to reduce those moments in the day where you hate yourself. I’m going to go ahead and suggest flailing around on a bed, squeezing loose flesh into a body-length corset, isn’t a self-loving moment.

When I look at a woman’s body, I look at how she gets in and out of a chair; her core strength. You’re noticing it, too. If a person heaves forward and grasps the table to get up, either they are nursing a back injury or have zero core-strength. Unconsciously, I think I’ll have to let this one die by the side of the road, she won’t make it.

I don’t really think that, but my issue with Spanx is it does nothing for muscle tone and injury prevention. It’s like the guys at a gym wearing weight-lifting belts. These belts reduce their intra-abdominal muscles and unless they are representing their country in the Olympics, make them look like a numbnut. I guess they look in the mirror and see Mike Tyson winning the heavy-weight division but if you need a belt to squat the weight – it’s too heavy for you. It’s also impossible to flirt with a man wearing one and I have tried.

I heard a story about a woman at a wedding who drank too much, went to the bathroom and as she wrestled out of her Spanx, fell over and knocked herself out. Her sister had to escort her through the wedding reception, blood pouring down her face. That kind of walk of shame can echo through the next decade. The other problem I have with Spanx is they now come with a pee-hole, which seems worse.

Vivienne Walshe is an Australian playwright and screenwriter. Her plays have been highly awarded and published by Currency Press. As an actress she appeared on The Secret Life of Us and many other television shows and performed in plays at the Melbourne Theatre company, Sydney Theatre company and Queensland Theatre company.

What do you think about Spanx – friend or foe?