Don’t hold onto those words – you might miss the chance to apologize.

Rachel Burke is a professional bedazzler.

From jackets to stockings, to cans of Spam, nothing in her home is safe from a little extra glitter – including her two daschunds, who graciously model pom pom headbands.

Based in Brisbane, Australia, she’s a fashion designer by day and a freelance artist in whatever time she has left (check out her portfolio), stocking her Etsy shop with wearable art. She’s on a roll, saying yes to every creative opportunity that comes her way, and somehow still making time for Apomogy.

After abandoning the idea of becoming a Broadway star, Burke was introduced to blogging. To challenge herself, she made one dress a week for 20 weeks, raising $5,000 for charity. But that wasn’t enough. I Make. You Wear It. was born as a home for her next task of making a dress a day for a full year. The blog now documents all her artistry and current projects. 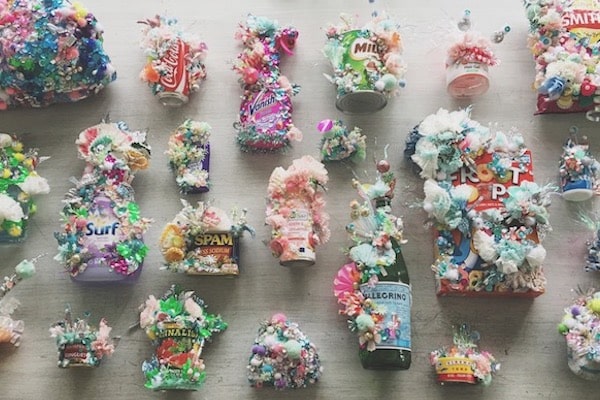 Apomogy is one of those side projects. Even though it’s been ongoing for two years, it’s still a big part of Burke’s life. It began as her own small way of genuinely apologizing to people in her life, and blossomed into a community of people from across the globe sharing their heartfelt apologies with – wait for it – pom poms.

Participants can submit a short apology through her website, then Burke handwrites the message on a card, attaches it to a toothpick and sticks the apology to a pom pom she’s crafted. Alternatively, she holds workshops for those who want to make their own pom poms, tell stories, and then reflect on the apology they want to share. 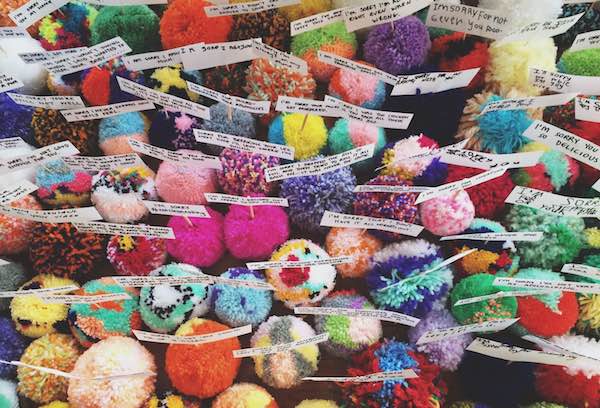 It all began during a time in Burke’s life when she’d fallen out with a couple of close friends, and felt the need to apologize, after realizing she was the common denominator in the relationship breakdowns.

“Looking back, I knew that I hadn’t behaved right, but I was too sheepish to say sorry. Eventually I did reach out to one of the friends, and we sat down to have a coffee. I think she expected me to come in with guns blazing, but I said I’m just really sorry. We ended up having a great chat and repaired that broken relationship.

I left that coffee date feeling  different. I realized how stressed that grudge had been making me feel. It got me thinking about apologizing, and one day it all hit me. I was imagining what an apology might physically look like. I love pom poms – they are all around my house, so I had the idea of writing out an apology and sticking it to the pom pom.” 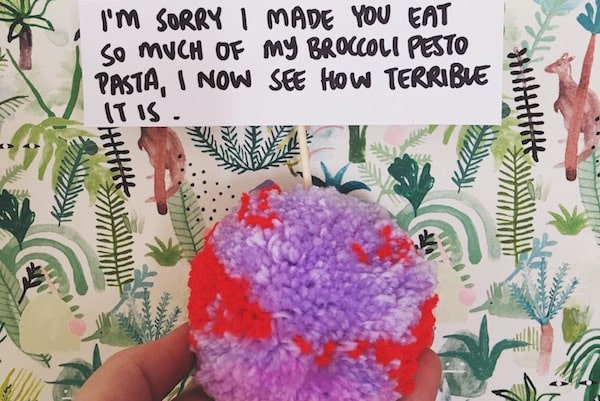 “I shared one on social media and people started contacting me about that little post. I started thinking, I’m on to something here. Maybe we need an avenue to share apologies that we haven’t spoken about before.”

From Burke leaving pom poms around her neighborhood, the idea spread. Apomogy workshops have now been held in China, Kenya, Greece, New York City and Australia, and readers daily visit Instagram to see what new apology has been shared. It’s become a safe outlet for anyone to anonymously share what they’re sorry about.

“I guess people really connect with the idea that they make something, which is obviously something people love doing, but it also has more depth. It’s a slice of honesty, a secret, essentially. And all of the apologies provoke, ‘Oh, what’s going on there?’ There’s totally a story behind them all. People love sharing an experience, and I think that’s why it continues to be relevant and why people want to participate.”

As the personal handler of all these confessions, Burke says, “There have been times when I’ve just had a cry because they’ve been sad or something that connected with me. There’s one that’s always stayed with me and it says, ‘Sorry we could only love one another from across the ocean.’ 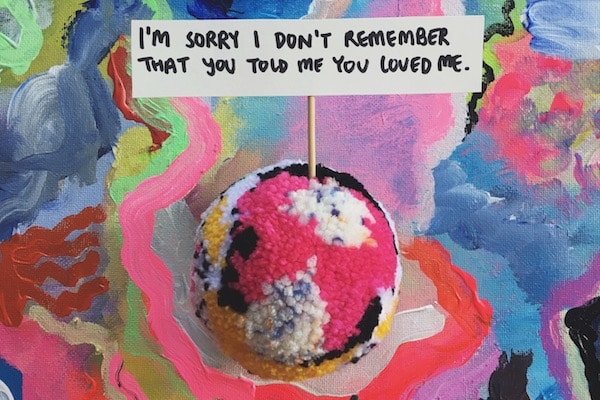 In her TED talk, Burke acknowledges that Apomogy doesn’t necessarily solve a problem between two people. It’s not a verbal mea culpa to the harmed party.

“It’s just an expression, but you use that as a gateway to maybe doing something about it. People have contacted me to say that they’ve been moved to make an apology to someone, which makes me feel like they just had a conversation that they might never have had.

Someone once emailed me to say they recognized the story that was being told in one of the apologies and said that it gave them a real sense of closure knowing it was about them. All of those stories make me feel like it’s had some sort of impact.”

There’s a common stereotype that women over-apologize to the point of it becoming a comma in their daily dialogue. Burke says this isn’t the type of “apology” she’s interested in. 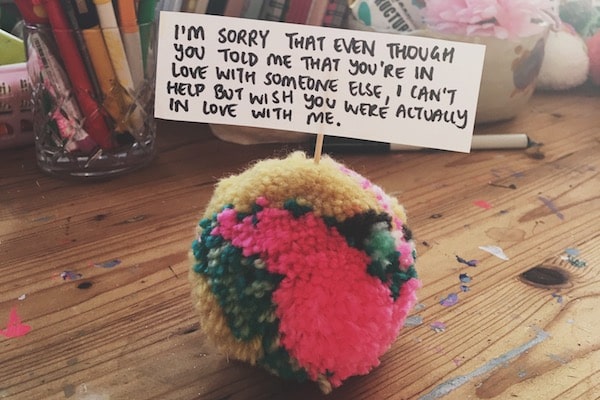 “I think the issue to address there is why are so many women apologizing in general? One of the things I’ve learned from this project is to be very selective with the apologies I give. I’m not about over apologizing or flippant apologizing. I need to take the time to think and be genuine. Apologies now have a special weight. But it doesn’t have to be this big terrifying thing, it can just be a quiet, sincere conversation. I don’t want people to hold on to those words because you might not get the chance.

My overall message is that sharing is important. As Western Society becomes more secular, we need to take these opportunities to come together as a community. I think the more we integrate technology with our lives and spend time glued to our phones, we crave opportunities to not be doing that. We want to do something tactile with our hands – creating something special.”

Comment: Has an apology ever repaired a relationship for you?