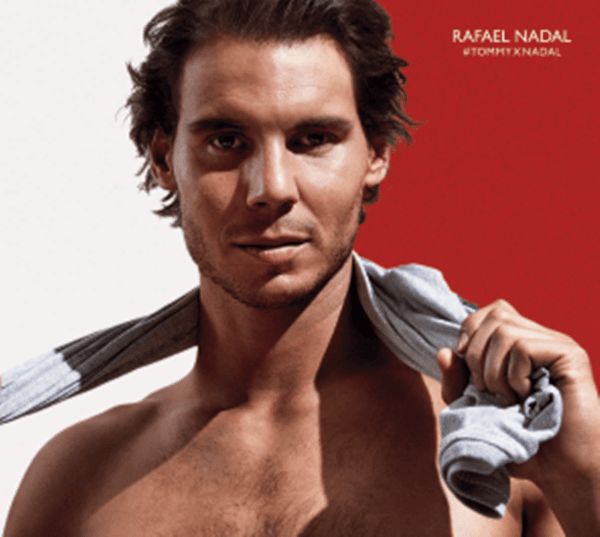 With the US Open just around the corner, the world’s tennis elite have flocked to New York City to for the final grand slam of the year. However, amidst the frantic last-minute training sessions and nervous pre-tournament press conferences, one tennista is attracting more attention than the others. Former world number 1, Rafael Nadal, has recently been announced as the brand ambassador for Tommy Hilfiger, and the promotion has been a little…interesting.

RELATED: Would You Buy Your Man Sexy Male Lingerie?

Although Rafa promotes the snappy suits and the new Tommy Hilfiger Bold fragrance, the focus is (of course) on the underwear range. When visualising sports stars and their generic underwear campaigns, the mind goes straight to the likes of David Beckham. He’s usually photographed in black and white, posing semi-seductively, face and body shrouded in shadow. The photos, while somewhat sexualised, do not come close to the almost pornographic imagery of female swimsuit and lingerie models. Don’t even start on the objectification of actresses when they promote anything and everything; right down to the last tube of foundation.

However, Tommy Hilfiger has well and truly flipped this sexist double standard on its head. This particular underwear promotion involves a three pronged attack. Firstly; the photo-shoot. It’s done in mostly bold colour, it’s very suggestive, and has a keen focus on Rafa’s extraordinary legs and booty, rather than the more conventional abs/biceps shot (although they certainly get a look in!). 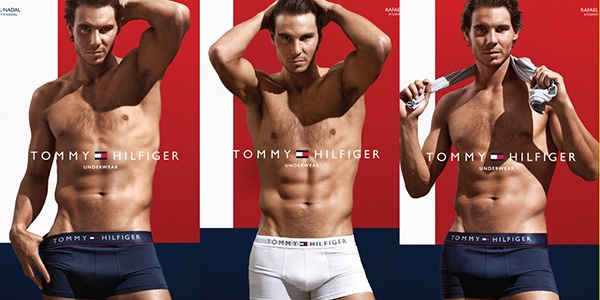 Curious yet? It gets even more fascinating. The second prong was featured yesterday in Bryant Park; a promo event with a twist. Rafa and a number of Hilfiger models (both male and female) took to a red, white, and blue court (Tommy Hilfiger’s signature colours) to play a game of strip-tennis. The rules were simple (and obvious); lose a point…lose an item of clothing. The idea was to eventually reveal the entirety of the Tommy Hilfiger range, bit by tantalising bit. Although Rafa fared better than the models, he lost the jacket, shirt, and tie of his new elastic suit; just enough to keep the fans happy, but still leaving something to the imagination.

Finally, the third tier that has everybody talking. Earlier this week, Tommy Hilfiger released a 30 second TV commercial featuring Rafa, his undies, and a locker room. It can only be described as a striptease worthy of Gypsy Rose Lee. Slowly, Rafa pulls off his shirt, jeans, and eventually his underwear, tosses his briefs at the camera, and saunters out of the room wearing nothing but a thin white towel. Just before he uncovers ‘everything’, the camera cuts to his face. He throws us a truly smouldering look, shakes his head, and turns away. That shake of the head must have broken a million hearts. What a tease.

Although this commercial is clearly a health hazard because it induces breathlessness and chronic fits of the giggles, it shines a new and surprisingly feminist light on the industry of underwear. Rather than the coy, casual imagery of every other undies campaign, Rafael Nadal, in all his Spanish glory, is teased, stripped, and objectified at the very same standard that women are held to.

There is nothing macho about it; no attempt to preserve the reserved/uptight masculine sexuality we are so used to. This is Rafa plus underwear plus raw sex appeal. As Glee star Jane Lynch put it, while hosting the strip-tennis match, it is “reverse sexism”.

But wait; there’s more! In addition, to showing off Rafa’s body in the same way a woman’s would be, Tommy Hilfiger has also moved a step closer to eliminating the standard of hetero-normativity in advertising. Obviously, the ad is aimed at straight men; they all (hopefully) wear undies. However, the overtly sexualised aspect; the portrayal of a male wearing very little clothing is clearly not aimed at women…they don’t wear men’s Tommy Hilfiger briefs (although some of them might after seeing the commercial).

If the global standard of heterosexuality were observed, Rafa would be in the usual Beckham-esque pouty poses. However, the seductive music accompanying the exposure of Rafa’s stunning body plus the steamy glance at the camera is also aimed at homosexual men. Rather than ignoring gay sexuality, this commercial takes it by the horns and uses it as an advertising tool. It’s the same as using women’s sexualised bodies to lure straight men into buying pretty much any product.

Maybe Tommy Hilfiger has dared to be so raunchy because of the European thing; the Spanish are, after all, a bit more comfortable with sexuality than North Americans and Australians. Maybe he subverted the idea of male sexualisation in this way simply to grab our attention. Hey; maybe it was Rafa’s idea. Either way, with or without realising it, Hilfiger has made quite possibly some of the most heartening progress in terms of eliminating the screaming double standard in male vs. female sexualisation. It even has its own hashtag; #tommyxnadal. So thank you, Tommy, for this (quite honestly) ground-breaking campaign. You and Rafa have given us all hope. And speaking of Rafa; it’s fairly certain that his support for the US Open has exploded spectacularly. Let’s hope he wins. As they say in Spain; vamos!

6 Things You Need To Start Doing To Your Vagina

12 Sexist Remarks To Shut Down This International Women’s Day