*Names have been changed to protect the not-so innocent.

We all have a steamy sex story.

Some have ended in pure pleasure, others in absolute tragedy.

But one thing’s for sure: if you don’t have an outrageously decadent sex story to tell, you haven’t lived.

So drop those pants and get on it (literally) – stat! Here’s some inspo, in case you need it…

“Me and the boys were at a bar, and there was a group of cougars at the next table. The boys bet me I wouldn’t hit on the hottest one, so I did. She ended up taking me back to her place and, damn, she knew what she was doing. She got on top and used her legs to pump my cock. It was so hot that I blew after a few minutes, but I ate her out to say thanks.” – Jacob, 19

“It’s midday, and I’m still lying in bed, blissful with the delicious warm load Eric left inside me before he kissed me goodbye to head to work. It’s been six months since we first met at a hole-in-the-wall bar in the city, and flirted over cheap wine. And yet, it feels like we’ve known each other forever.

Eric is the kind of man I’ve always fantasized about being with; tall, with broad shoulders and a robust, muscular body – the kind you get from laboring all day as a builder. His work uniform – a bright orange safety shirt, oil-stained khaki pants, and dirty work boots – always turns me on when he shrugs himself into it in the early hours of the morning. As someone who works with his hands all day, lifting piles of bricks and slathering cement in sidewalks, he knows how to use them well. His strong, rough fingers know their way around my body like no one else has ever known it before. Just thinking of the way he uses them to explore my deepest desires makes me long urgently for him.

Suddenly I’m tracing my fingers down my body as I lie in bed alone. They roam between my round, perky B-cup breasts and then down over my navel, and finally, into the pulsating, wet ache between my legs. My clitoris engorges with blood quickly as I replay the morning’s lovemaking session in my head, edging myself close to orgasm quickly. I reach for the pillow Eric slept on last night, still studded with his earthy cologne, and prop it under my butt, then grab the slender vibrator in my bedside drawer, and plunge it into me, arching my back as it hits my G-spot, and brings me to a powerful, whole-body climax.” 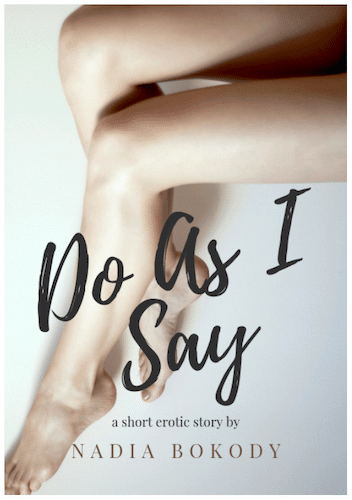 The dress had arrived in a pristine white gift box, adorned with a large red ribbon, tied in a delicate bow, with a silver envelope tucked under it. I’d excitedly opened the envelope to find a card inside, that read:

“Wear this with nothing underneath tomorrow night. I have a surprise for you.”

Again, I’d felt that conflicting prickle of indignation at his ordering me around, juxtaposed with an unmistakable throb of desire, and hunger for what lie ahead…”

Want more of this story? Check out the e-book HERE!

“I’m a producer at Fox Sports. While I was making a coffee in the kitchen, a deep voice came from behind: “Know where I can get some sugar?” I turned around, noticed it was my fave NFL player, and said: “Right here, right now.” It was like a scene out of a porno, and so unlike me! He raised one eyebrow, lifted me onto the counter and kissed me intently. I hopped down, put my hand down his pants and dragged him to the ladies’ toilets (I was the only one on that night). We dropped our pants, then he lifted me up with his insanely muscly arms and fucked me hard.” – Sarah*, 29

“There’s a bar near me where only wealthy men hang out. Often, when I’m feeling a bit down, I’ll dress up in my best dress, do my nails, hair and makeup, and go down there. I’m always approached by at least one man, we leave together and fuck wherever they want. Then, when they’re done, they leave me with a large sum of cash; they think I’m a prostitute and, actually, I love the thought of getting paid to get my rocks off.” – Bree, 34

“I found out my husband was cheating on me, so when he came home, I made sure I was in the kitchen holding a knife. It made me feel strong. Then I confronted him about it and he came clean. I don’t know if it was his honesty or the fact another woman found him attractive, but the next thing I knew, I’d dropped the knife, jumped into his arms and was riding him on the kitchen tiles. I filed for divorce the next day.” – Bridget, 31

“My man and I have been married for almost 10 years, and we have two kids. One night, we decided to drop them off at their grandparents’ place, get seriously drunk and live like we were 18 again. We ended up fucking on a mini-golf course. I left with scratches on my back from the fake grass, but it was totally worth it!” – Michelle, 34

“I’m a simple girl. The hottest sex I ever have is when I keep my panties on and the guy pushes them aside to fuck me. It makes me feel so naughty!” – Maddy, 27

“I’m a nurse, and I felt really bad for this patient of mine. He’d been in for a long time, but nobody had visited him; he kept a photo of his late wife nearby. So I pushed for him to be moved to another room, so it wouldn’t be hard on him when other patients got visitors. Then when I was on night shift, I would sneak into his room, hop on top of him and fuck him in the dark. Yes, he knew it was me. No, nobody found out. Why was it anybody’s business, anyway? We were two consenting adults.” – Jane*, 32

“On a red-eye flight to Los Angeles, my boyfriend and I were given the chance to have a row of three seats to ourselves – everybody was; the flight wasn’t even half booked! He wanted to sit at his own three seats, but I’m not a good flyer, so I begged him to stay with me. To make it worth his while, I asked the stewardess for another blanket and made my man fuck me from behind. Once cabin service is finished, barely anybody walks through the plane, so we weren’t making anyone uncomfortable. And don’t worry, we kept the blankets.” – Steph, 28

Join the discussion: Where’s the weirdest place you’ve had sex?