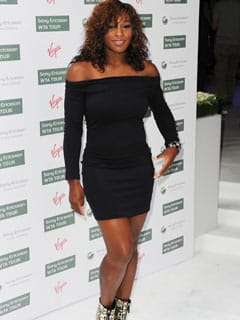 Serena Williams has admitted that while she has been trying to “lean out” a little, she would never diet.

The Wimbledon champion – who has won more prize money throughout her career than any other female athlete in history – told America’s Harper’s Bazaar magazine: “I’ve been doing Pilates and yoga, trying to lean out my body so I won’t be bulky. I don’t even know the D word.”

While it may have taken the sports star some time to get used to her curves, she explained her smile has always been the favourite part of her body.

Serena stated: “I think a smile can make your whole body. Models, they look fabulous, but they don’t smile and they look so mad. But I like my smile, how it’s bright and it’s nice. Good thing my braces worked out.”

She also revealed that she has finally accepted the fact she will never have the same physique as her trim sister, fellow tennis player Venus.

She explained: “I was 23 when I realised I wasn’t Venus. She’s totally different. I’m super-curvy. I have big boobs and this massive butt. She’s tall and she’s like a model and she fits everything.

“I was growing up, wanting to be her, wanting to look like her, and I was always fitting in her clothes, but then one day I couldn’t.”

“Since I don’t look like every other girl, it takes a while to be okay with that. But different is good.”