Prepare for Leo at his all-time greatest.

Finally, an explanation for Leo’s inexplicable beard! Rockin’ this enigma of facial hair onscreen, Leo has given what is easily his best performance to date, in his best film.

Set to release in theatres nationwide next month, The Revenant is based on the real-life story of Hugh Glass (played by DiCaprio), who is left for dead by his hunting party after being mauled by a grizzly bear, then must make the near-impossible quest to return to camp and exact revenge on those who betrayed him.

While I can’t say The Revenant is going to be my fave movie in the world because, you know, I’m not a sadist or a vampire (it’s got about as much blood in it as three episodes of Trueblood), it’s definitely DiCaprio at his acting finest. The leading man already has a SAG Award nomination for Outstanding Performance For A Male Lead and the film hasn’t even hit cinemas yet.

So what makes The Revenant such a special film for him? When you consider all the roles Leo could have chosen, a gun-toting, pelt-hunting, Indian-slaying pioneer of the 1820s American wilderness is by far the least obvious. And unlike DiCaprio’s role as financial tycoon Jordan Belfort in The Wolf of Wall Street (where the hell is his Oscar?!), the first thing I noticed about him in this film – besides his ability to make suffering through a blizzard look sexy – was how little he actually says in it. It’s probably the least wordy I’ve ever seen him. However, you soon forget this, as his physicality shines through.

The film itself, while bewildering for the first 20 or so minutes, turns out to be quite extraordinary. Directed by Alejandro González Iñárritu, the style is quirky as hell, perfectly elucidating the delirious, dream-like state of the truly desperate Glass after he is left to battle the elements, coupled with a graphic but accurate depiction of the brutality of Winter in 19th century America.

Is the film horrendously violent? Yes. Did I sit as far back in my chair as possible, longing to cover my eyes, but unable to look away? Absolutely. However, no gunshot, arrow piercing, oozing wound, or spray of blood was gratuitous. Instead, you’d call it contextual. Without this rawness, the film, in all its artsy glory, would come across as sterile. 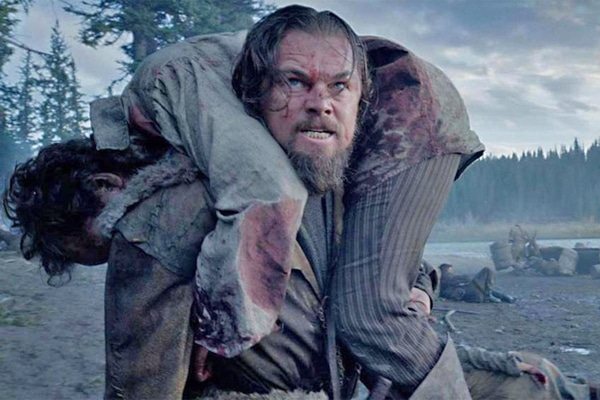 From lying immobile on a makeshift stretcher to sheltering for warmth inside the belly of a dead horse (yep, it happens), not once is the audience cheated of any element of storytelling as we are once again reminded why DiCaprio truly is one of Hollywood’s brightest stars.

I’ll admit, stating this is the performance of his career is a very big claim. He’s given some fabulous performances in the past. However, the huge risks he takes an actor in this particular role add a delicious element to the entity that is Leo. Doing the film was a risk in itself, as we’re not seeing the typical Leo who has sex appeal that can’t be taught. Beard, dirty face and a bod full of bloody sores is quite the contrast to the fresh-faced ingénue we saw in Romeo + Juliet. But it’s so wonderfully refreshing, and in fact thrilling, to see him do something so very different.

Everyone, go see The Revenant. It’s not for the faint of heart, but you get over the wounding and maiming in about 10 minutes. The story is great. The performances are excellent. And if the Academy doesn’t finally give Leo his long-overdue Oscar for this one, I am actually going to bang my head against a wall while belting out a tearful rendition of My Heart Will Go On.

The Revenant opens in cinemas in limited release on December 25, before releasing nationwide on January 8.