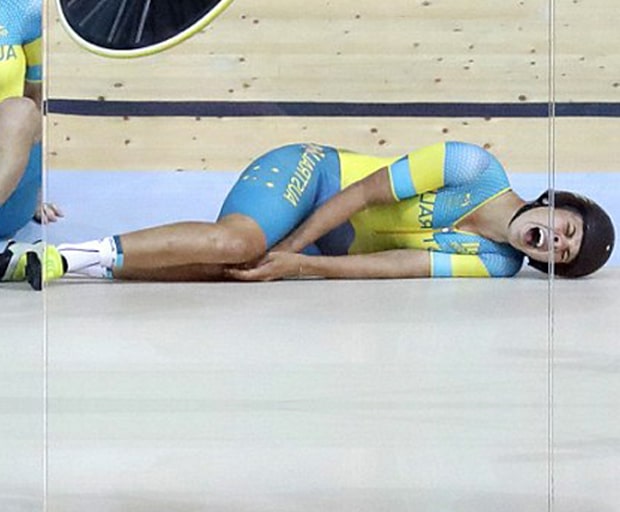 Meet The Brand That Lets You Design Your Own Activewear

Such a heartbreaking incident.

Even more bad news has come out of the Brazilian city, this time from the velodrome of the Olympic Games.

Australian women’s pursuit track cyclist Melissa Hoskins has been taken to hospital on a stretcher after a high-speed multi-rider crash saw her and three teammates – Ashlee Ankudinoff, Georgia Baker and Amy Cure – collapse to the ground when their wheels clashed during a training session.

“At this stage, of the four girls that went down, three appear to be superficial [injuries] with a little bit of bruising and skin off or splinters, but they’ve headed back to the village now and are working on their recovery,” he reveals. “Mel Hoskins fell the hardest of the four, and she’s been taken to hospital and is with our chief medic for cycling. She’s in good hands – the hospital she’s gone to is an excellent facility.”

Annette Edmondson is the only member of the team to have avoided the crash.

The road to this year’s Olympics has not been smooth for Hoskins. Earlier this year, she missed out on the world championships because she was recovering from pneumonia.

“[Hoskins will] be disappointed, this is not ideal, I’m not going to lie,” says Tabotta. “These girls have worked hard for four years to be here, but I don’t want to jump to any conclusions.”

Racing begins on Thursday, so only time will tell if Hoskins will be fit to join her gold-medal-contending team.

Meanwhile, in the gymnastics arena, French gymnast Samir Aït Saïd suffered a broken leg two days ago during the men’s qualifier when he landed badly on the vault. It was pretty much the most hideous injury you could imagine being witness to in such a beautiful sport.

Comment: What are your views on the Olympics? Is it right to be pushing people’s bodies to such a physical max?