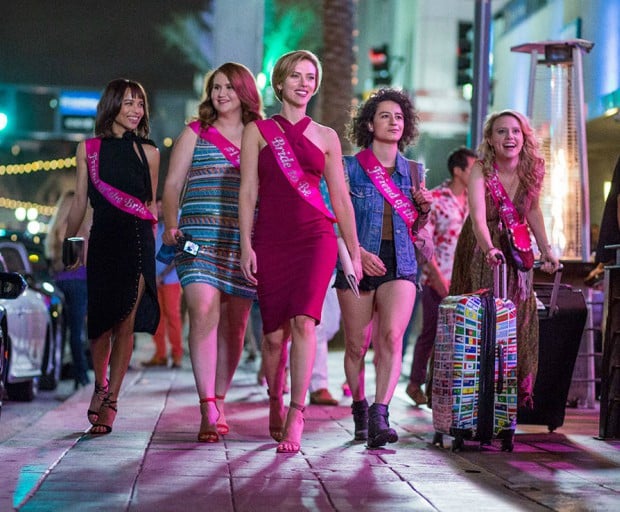 Why Science Says You Shouldn’t Text Him Back Right Away

Make plans to see this one with your girlfriends now.

The forthcoming film Rough Night stars Kate McKinnon, Scarlett Johansson, and Ilana Glazer – and it was co-written and directed by the people behind Broad City. What more could you possibly need to know before putting it on your must-see list?

Directed by Lucia Aniello, who also co-wrote the script with Paul W. Downs, Rough Night (originally titled Rock That Body) is about five college besties who reunite for a bachelorette weekend in Miami. But in the midst of a cocaine-fueled night of partying, they accidentally kill a stripper. Madcap adventures ensue as they scramble to cover up the crime.

Aniello is a producer, director and writer for Broad City, which was co-created by and co-stars Glazer. And Downs, who also plays Johansson’s fiancé in Rough Night, is a writer and actor on Broad City. The movie also stars Jillian Bell, Zoë Kravitz, and Colton Haynes as the ill-fated stripper.

Despite the drugs and other assorted debauchery, Aniello told BuzzFeed that the movie is really about what happens to friendships as they change over time. “It was really more about honing in on our experience of having friendships from high school and college that have evolved and maybe gotten a little bit distant. What does it feel like when you reconnect with those people? Are people excited to be reunited? Are they resentful? What is that experience like?”

Aniello says she hopes the movie will make people reflect “on their own lives and their own friendships and relate to friendships that maybe should be worked on.”

To see the NSFW, red-band trailer, go to BuzzFeed’s Facebook page, where it debuted yesterday.

Image via Macall B. Polay/CTMG, Inc.