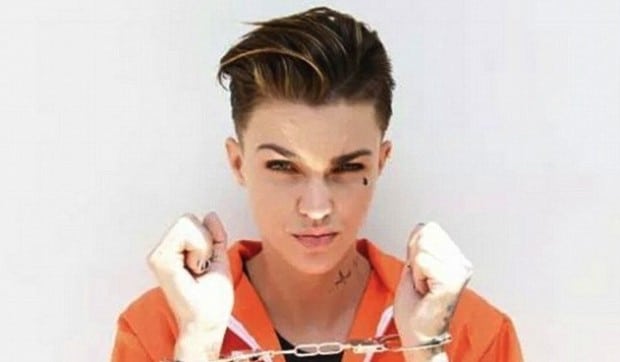 Whenever I mention the name Ruby Rose, the reaction is a distant look, a half-smile and a sighed repetition of those two delightfully alliterated words. The 29-year-old has firmly carved her niche. Whether as a model, actress, philanthropist, DJ or VJ; you will know her from whichever fabulous branch has happened to brush you. Her work as androgynous beauty, Stella Carlin, in Orange Is The New Black turned heads and hearts and gave many heterosexual women reason to question whether they really are straight-up-and-down.

RELATED: Sexual Orientation Is Not So Straight-Forward

I am absolutely one of these questioning ladies. However, Ruby Rose was my bisexual awakening long before her pink underwear peeked over the edge of her prison pants. When I was 19, I was working as an usher in a theatre. I had a number of lesbian friends, but being sexually attracted to another girl was something that had never occurred to me. One night before work, my fellow ushers and I were briefed that Ruby Rose was coming to see the show. I hadn’t really heard of her, so one of my guy friends (who was really into lesbians) filled me in. After a quick Google search, I had a vague idea of what to expect.

Later that evening, it was made known to us that she was held up and that we would seat her with the latecomers. I was on foyer duty and responsible for explaining the ten minute lockout rules regarding mobile phones/photography in the theatre, blah blah blah. A couple of minutes into the lockout, a woman walked in, looked around tentatively and approached me.

“Yes, of course!” I replied, my eyes bright with customer service enthusiasm. “We’ve been informed that she will arrive soon.”

“No problem – can I wait here?” she muttered. I confirmed that she was indeed welcome to wait in the foyer and turned my attention once more to the front doors, growing increasingly curious about our famous guest. Finally, the ornate doorway opened again and in walked this person…

She had the presence of five people and I felt the energy in the room shift as she glided in. She wasn’t so much tall as statuesque; with an immaculate pixie cut, skin tight dress and piercing eyes. Her mouth was a perfect rosy hue; it shone with painstakingly applied (presumably Maybelline) lip gloss. As she moved towards me, I caught a whiff of her perfume. It made me weak at the knees. And the tattoos… Holy hell, I’d never found ink that attractive before, but on her…

Finally, Ruby reached me. I was speechless (which, for me, is a HUGE deal). “Um…hi – hi, welcome,” I finally managed to stutter. She looked at me contemplatively for a second, then opened her sumptuous mouth to speak: “Could you please tell me where the bathroom is?”

I fumbled over myself, gesticulating clumsily towards the ladies room. I was as jumpy as a whore in church. Ruby thanked me politely and moved away. As I stood in her wake, I knew that something extraordinary had happened. Did I – for the very first time – have a crush on a girl?!

It was then that the vast spectrum of human sexuality began to reveal itself. I’m not saying that sexuality is a choice (it isn’t) and I still identify as straight, but my God; Ruby Rose flicked a very important switch in me that evening. So Ruby; keep doing your thing, because I think it’s quite astounding that of all the people I’ve met, the places I’ve been, the experiences I’ve had; what has affected me so potently is spending three minutes in the presence of Ruby Rose.

An After-Sex Joke Brought My Date To An Abrupt End