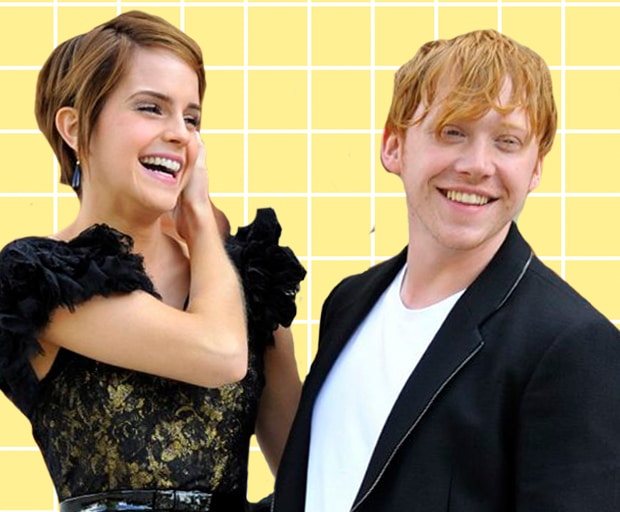 One of everyone’s fave love stories, that of Ron and Hermione, has been royally shattered by actor Rupert Grint, who played the beloved Ron in the Harry Potter movie franchise.

“I never look back at that scene,” Grint told People magazine at Universal Orlando’s Celebration of Harry Potter event this Friday.

In fact, according to our fave onscreen redhead, the offscreen relationship between Ron and Hermione was decidedly sibling-like.

“I’ve known Emma since she was literally nine years old and we had this very brother-sister relationship. And it just felt very surreal. I have a memory of her face getting closer and closer. Like, ‘Oh my God.’ I can’t really remember anything apart from that.”

So cringe-worthy was the lip lock for the actors that they insisted on doing it in just the one take, with no actual rehearsal scenes.

And the duo didn’t bother to practice the highly-anticipated moment.

“One take was enough. It was such a huge moment and there was so much expectation. Quite a lot of pressure actually,” Grint admitted.

And while Grint may be the only living man on the face of the earth who doesn’t think Emma Watson is a unicorn goddess, it seems the feeling was definitely mutual.

“Rupert was the weirdest. Dan wasn’t so bad…I just had to remind myself, ‘I am an actress. I am Hermione. This is a role.’ But it was really hard. We just have so much history together. They are like my brothers,” Watson told OK! Magazine in 2011.

Seems like the chemistry firing between the couple onscreen was nothing more than really convincing acting. Are we wrong for wishing it was more?