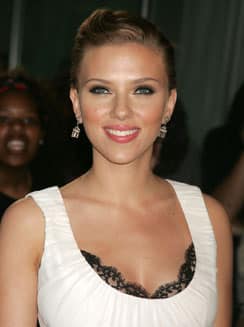 The ‘Iron Man 2’ actress – who is regularly voted one of the world’s sexiest
women – likes to change her appearance, especially her hair colour and
style, as she thinks it’s all part of being female.

She said: “I’ve had so many hair colours and I’ve worn loads of wigs. For
me, it’s part of the fun of being a girl – changing your looks and exploring
different ones for yourself. I always like to do that.”

The 25-year-old beauty enjoys having fun with fashion but doesn’t think her
style is any different to that of women in her native New York.

She told Look magazine: “I’m a girl – of course I like getting dressed up.
I’m a girlie girl, I like clothes, fashion and all that stuff. It’s fun.
“But I think I dress like a regular girl from New York.”

In ‘Iron Man 2’ Scarlett – who is married to actor Ryan Reynolds – has to
don a tight suit for her role as Black Widow and she admits it took some
work to look good in it.

She said: “I definitely adopted a really healthy lifestyle. I did strength
training, a lot of core work and all of that stuff. It’s all about building
strength and agility.”