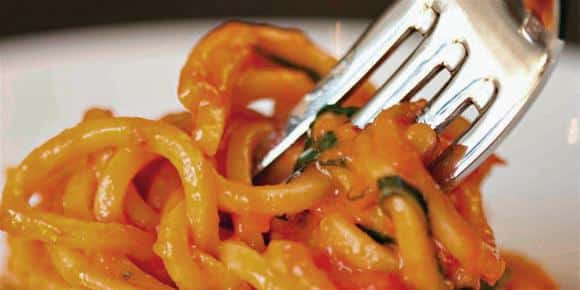 How To Add Volume To Thin, Flat Hair

In New York for Fashion Week I popped into celebrity chef Scott Conant’s West Village restaurant Scarpetta for a plate of his (in)famous tomato basil pasta. It’s so good and so easy (and makes the most of late summer tomatoes and basil) I had to share the recipe with you!

Method
1. To peel the tomatoes: Bring a large pot of water to a boil. Have a large bowl of ice water nearby. Cut a small X on the bottom of each tomato. Ease about five tomatoes in the pot and cook, let boil for about 15 seconds, and then promptly move them to the waiting ice water. (Do this with the remaining tomatoes.) Pull off the skin with the tip of a paring knife. If the skin sticks, try a vegetable peeler using a gentle sawing motion. Cut the tomatoes in half and use your finger to flick out the seeds.

3. Let the tomatoes cook for a few minutes to soften. Then, using a potato masher, chop the tomatoes finely. Cook the tomatoes for 20 to 25 minutes, until the tomatoes are tender and the sauce has thickened. (You can make the sauce, which yields about 3 cups, ahead of time. Refrigerate it for up to 2 days or freeze it for longer storage.)

4. To serve: Bring a large pot of amply salted water to a boil. Cook the spaghetti until just shy of al dente. Reserve a little of the pasta cooking water. Add the pasta to the sauce and cook over medium-high heat, gently tossing the pasta and the sauce together with a couple of wooden spoons and a lot of exaggerated movement (you can even shake the pan) until the pasta is just tender and the sauce, if any oil had separated from it, now looks cohesive. (If the sauce seems too thick, add a little pasta cooking liquid to adjust it.) Take the pan off of the heat and toss the butter, basil, and cheese with the pasta in the same manner (the pasta should take on an orange hue) and serve immediately.