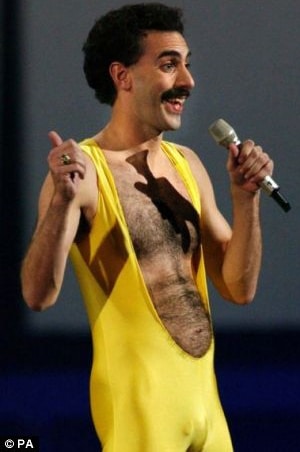 The resemblance is definitely there, well, if he keeps his moustache on. Borat funnyman Sacha Baron Cohen is preparing to play Queen frontman Freddie Mercury in a biopic which could be the role of his life.

But it’s not the first time Cohen has been involved with Mercury. While hosting the MTV Europe Music Awards in 2005 and dressed in fluoro monokini, he introduced himself in true Borat style with “hello it is me, Freddy Mercury…I joking, he die of AIDS.”

The yet untitled film starts filming in a few months and is written by biographical scriptwriter Peter Morgan, who’s written The Queen, Frost/Nixon and The Last King of Scotland.

The film will focus on the early year’s of Mercury’s career, and will avoid any mention of his death from an AIDS-related illness in 1991. It’s expected to focus on the lead up to Queen’s legendary performance at Live Aid in 1985, which is still a CD and DVD bestseller.

This is the first time the surviving members of the band have licensed their music to be used in a biopic – after giving their blessing to Ben Elton’s hugely successful stage musical We Will Rock You.