It’s been a year since Qantas flight attendant, Owen Beddall, passed away unexpectedly.

The first-class attendant is perhaps best known for leaving behind a tell-all book about his time at the iconic Australian airline and the staff he worked with there (FYI, he was asked to do some pretty effed-up things!). While serving the rich and famous, the elite staffer rubbed shoulders with celebrities including Venus Williams, Katy Perry, Lily Allen, Cate Blanchett and Russell Brand; often at their most vulnerable.

Flight attendants like Beddall don’t just do back-to-back flights. Sometimes they’ll land at a destination – say, London or Brazil – and stay there for a week until their next rostered shift takes them home. And the things they get up to while they’re not being watched by hundreds of passengers… let’s just say not everything about this industry is as glamorous as it seems, as the following eye-opening extract from the late Qantas staffer’s book reveals…

The symbiotic relationship between ﬂight attendants and pilots is as old as doctors and nurses. Female ﬂight attend- ants wanting to be a pilot’s wife can be found on ﬂights all over the world every day – on every airline and from all cultures.

The majority of Qantas pilots – or tech crew – are men; they’re not always attractive looking but the lure of the uniform is. At school, they would have been the smart maths and science dorks, and they come out of aviation school with all the other dorks in their snappy uniforms, shoulder stripes and spray tans and they’re instant chick magnets, ﬂying around with beauty queens. They cannot believe their luck.

Flight attendants who speciﬁcally target pilots are known as TCMs – ‘tech crew molls’ – and they normally try to work on the upper deck, which services (ahem) the cockpit. They were easy to spot and blatantly predatory; they walked with an air of purpose about what they wanted: becoming a pilot’s wife. I really noticed it when I was working out of London with the new crew of typical young Brit girls, who were ﬂying abroad to party – only this time with young second ofﬁcers.

They were so keen to work upstairs I could practically name my price to swap positions.

‘Okay.’ That would help with the bar bill.

There are four pilots on a 747. A crew rest in the cockpit is for the use of the captain and the ﬁrst ofﬁcer. There is an aft ﬂight crew rest for the (usually very young) second ofﬁcers, located conveniently near the upper-deck galley, where the two ﬂight attendants work. Some of these girls found their way into the crew rest with the second ofﬁcers; if they weren’t there when you were looking for them, they’d be in the cock- pit with the pilots. 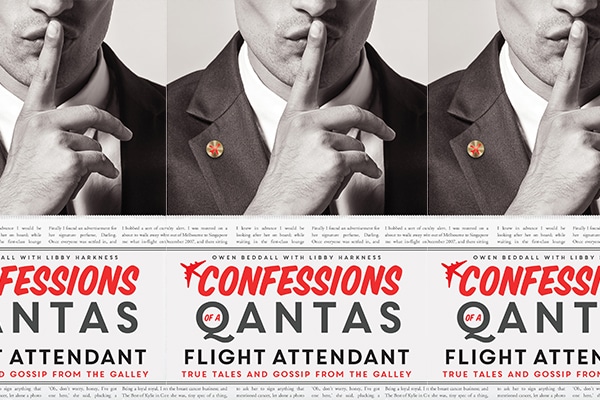 There was one notorious TCM called Kasey, who was believed to have slept with almost every pilot known to man – and not just the Qantas ones. And she would spread stories about their performance. One pilot’s dick, she disclosed, was so small that she took one look, got dressed and said she was going home; it was hard not to laugh every time we saw this poor pilot afterwards because we all knew he had a little stump. On one ﬂight, an argument broke out in the cockpit when one pilot said he was dating Kasey and another pilot said he was dating her too; then the captain piped up and said he’d been out with her in Hong Kong the week before. Three straight men – all married – all shagging the same ﬂight attendant.

TCMs were also numbers driven – the wider they cast their net, the greater the chance of a catch; the looser the net, the bigger likelihood of getting a prize catch – a captain. Although generally less physically desirable, captains had command, earnt the big bucks and their partners had access to ﬁrst-class staff travel. The down side is that they were usually divorced more than once and therefore had to pay out a lot of exes and probably had ongoing child support commitments.

When the new London base opened and a whole lot of junior crew joined the airline, this was very exciting for the pilots; there was a lot of talk about ‘fresh calamari’. Apparently this expression referred to a particular part of a woman’s anatomy. While the young girls might have been mesmerised by the pilots, the pilots weren’t always mesmerised by the young girls and would often deride them as being ‘as dumb as dog shit’. Talk about high-level misogyny! (That’s the advantage of being gay by the way; you get the inside on what both sides are saying.)

Penny, one of the young Pommie ﬂight attendants, a real Essex girl if ever there was one, with big tits that she used to thrust into people’s faces, was quite brazen about slipping into the crew rest with pilots. Once, Sylvia, a very senior ﬂight attendant with an extremely regal manner came up the stairs looking for Penny.

‘Owen. Have you seen Penny?’

‘No, Sylvia,’ I lied. I knew Penny was in the crew rest because I could hear the thumping and giggling. Sylvia went back down the stairs. I knocked quietly on the door. ‘Penny, Sylvia’s looking for you.’ A few moments later she emerged nonchalantly and started straightening her hair.

‘I’ve been looking for you too, Sylvia.’ I said Penny was brazen.

‘Really? Well I hope you haven’t been walking around looking for me with your skirt up around your thighs; I’d pull it down if I was you.’

Craving more? Find out where to pick up a copy, here.