After doing some very intriguing research, I’ve come to the conclusion that not all sex fetishes are created equal. There were 549 different types listed by researcher Anil Aggrawal in 2009. Who knew there were so many sexual fetishes out there? Some are reasonably common like the old foot or lingerie fetish. Then there are some in a whole class of their own.

While I’m not knocking anyone who participates, it does pose the question: How far would you go to please your lover? Before you answer that one you may want to take a look at what some people are actively getting up to. Just goes to show you really don’t know what’s going on behind closed doors! 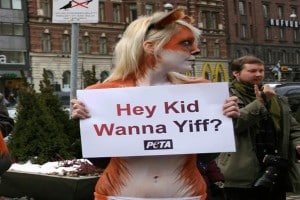 />Furries: This fetish is harmless yet a bit bizarre (see the best furry sex toys) . Furries dress in animal costumes and take on their characteristics. Instead of stripping off their costume, it’s not uncommon for furries to dry-hump each other or engage in other sexual acts while in costume. This is called Yiffing. I did say it was bizarre!

Pedovestism: This fetish involves dressing as children, either themselves or their lover. While some people say this fetish is pure fantasy which makes it okay, others find it extremely disturbing.

Autonepiophilia aka Infantalism: The fetish of dressing like or imagining oneself being a baby. Wearing nappies and sucking dummies are popular with this one.

Biastophilia: Sexual arousal occurs at the thought of having sex with a non-consenting person. In other words, rape. Regardless of what people think of this fetish, rape fantasy is actually pretty common for both genders. 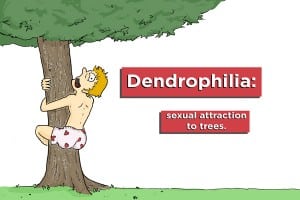 Dendrophilia: I love gardening an nature but it’s hard to believe anyone could be turned on by a tree. Yes, a tree. I suppose if it doesn’t hurt anyone… whose to judge?

Agalmatophilia: Having a fetish for immobile human figures like statues or mannequins. Bring out the blow up doll!

Ursusagalmatophilia aka plushophilia: Teddy bears have a totally different type of attraction for people with this fetish.

Mechanophilia/mechaphilia: We all know that some men seriously love their cars but this is a fetish takes that love to a whole new level! It’s not just cars which turns them on. Apparently this fetish can include others types of machinery as-well.

Hierophilia: Being sexually aroused by sacred or religious items like crosses. It sort of brings a whole new meaning to callling out “Oh my God” during orgasm, doesn’t it?

Forniphilia: Instead of having sex with inanimate objects some people are turned on by pretending to be them. If you’ve ever sat on your partner’s lap have you ever been turned on by the thought of them being an actual chair? 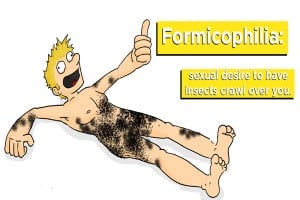 Formicophilia: While some people have a fear or creepy crawlies people with this fetish get aroused by the feeling of small insects crawling over them or being bitten.

Zoosadism: Some people get off on watching animals in pain and will inflict pain just to witness their reactions. This fetish also involves the practice of bestiality. This is when humans have sex with live animals. Yes this does happen. It’s believed this practice is so old it dates back to the prehistoric era when dinosaurs shared our planet.

Avisodomy: A fetish to have sex with birds. The flying variety! It brings a whole new meaning to the phrase “she’s a nice looking chick“.

Crushing: While wearing high heeled stilettos some women will crush objects underfoot to turn on their lover. That’s relatively harmless but unfortunately sometimes the objects they crush include small animals.

Sitophilia: Sexual food play sounds reasonably tame but it can also involve Salirophilia. This fetish is when willing participants get turned on by getting covered in food or other substances including blood and feces.

Vorarephilia: This fetish was made infamous when a German man chopped, cooked and ate a willing participant. This bizarre fantasy surrounds being eaten, swallowed whole or eating others. It sounds very much like several species of female spiders who devour their mate after having sex with them.

Urolagnia: This fetish has to do with urine or urinating. There are variations of this fetish including clothes wetting, exhibitionism (desperate to go or wetting yourself in public), human urinal (aka golden shower) when a person wants their lover to pee on them or inside them during or after sex, omorashi (intentionally holding on or making someone wait to urinate. How painful!), pussing (male watching female urinate in public toilets. Sneaking into the public toilet is said to be half the fun!), voyeurism (watching urination through peel holes). Some of these fetishes are more common than others and apparently the golden shower is a popular one with the ladies.

Liquidophelia: Sexual arousal occurs when genitals are submerged in liquid. Can involve urolagnia.

Emetophilia aka roman shower: Vomit usually turns people green but some people get off on witnessing it or enjoy vomiting on their partner before of after sex.

Eproctophilia: Who’d have thought farting, mainly female farting could be a turn on?

Coprophilia: A fetish for feces. Salirophilia is popular as it consuming it. Enough said.

Mucophilia: Some people are very turned on by mucus.

Menophilia: While most men avoid the topic of menstruation, some men get off on thought, sight, smell or even the taste of a menstruating woman.

Necrophilia: Death is a natural process but fantasising about having sex with the dead is reserved for especially people with this fetish.

So, just how far would you go to please your lover? You’d better find out what if there are any sexual fetishes lurking before answering that one!