Feeling Frisky? Sex Positions For Beyond The Bedroom

Way too often couples get bored with their sex life because they fail to alter their routine. Sex becomes a chore and they get stuck performing a few standard positions – a great way to douse anyone’s flame! Sex is supposed to be exciting, exhilarating and one of life’s experiences which literally takes your breath away.

RELATED Where To Have Sex In Public Without Getting Caught

If your settling for anything less in your sex life, you need to mix things up. Forget about sex in the bedroom for a while and open yourself up to your surroundings. Beds are a relatively new invention when you consider people have been having sex for thousands of years, so it’s time to release your inner sexual prowess and get busy!

Not sure where to start? Well we’ve got a few ideas for you. So, whether you’ve got room to move or you find yourselves getting hot and heavy in a tight space, you can explore some of these positions whenever – and wherever – the mood arises.

The G-Force: Gravity works a treat with this position as penetration can be intense. The female lays on her back and tucks her knees in towards her chest. The male kneels in front of her and takes hold of her feet. Genitals alight very easily allowing for deep penetration. If you like this position and want a bit of extra variance, the female can bring her feet up onto his chest. Then, instead of holding her feet, he can grasp her hips while he’s thrusting. This position gives both parties ample control.

Carpet burn: Up for a bit of pain and pleasure? As the name implies this position can cause a bit of friction for the knees. It can be done in bed but try and find somewhere else suitable. A shower is a great alternative. Basically, the male kneels down in a standard proposal position with his legs slightly separated. Once he’s in position, the female then kneels in front of him. She parts her legs slightly to allow entry as the genitals meet. For additional female control she should take hold of his thigh in one hand and his butt in the other.

Get Down On It: This is a meditative position with a difference! Initially, the male sits in a traditional lotus position. The female then sits in his lap slipping ever so effortlessly onto his awaiting erection. She then completes this position by wrapping her legs around his waist. This position is more about intimacy than fast thrusting. So if you’re looking for a position which is slow and sensual and  encourages a lot of tongue action, this one is for you.

The Octopus: This image makes it a little hard to tell what’s actually happening, but the male sits on the floor with his hands behind him for support. He should spread his legs a similar distance apart and have them slightly bent. The female then places herself between his knees and is supported by her hands behind her on the floor. She can then bring both of her legs up to his shoulders and bring herself closer to enable penetration.

Head Over Heels: This one isn’t for the faint hearted and is a bit of a take on the old wheelbarrow position, so physical fitness is important. The female begins by lowering herself to her knees, legs slightly apart while crossing her arms on the ground in front of her. Using a pillow to cushion elbows is strongly advised for comfort and additional support.

She then sticks her butt in the air and rests her head on her arms. The male then stands behind her and lifts her by the legs or ankles into a position where he can enter her comfortably. Both keep their knees bent during the encounter. If either of you have problems with your knees, this one might be a bit tricky.

Corridor Canoodling: This one is excellent for that quickie in the toilet when you just need sex right this instant! Initially, the male positions himself to do the overall supporting. He leans against one wall, sliding down until he’s in a sitting position. His feet should wedge against the other wall to make both people stable. The female then straddles him and she does most of the work. His main role is to support, sit and be ridden as she is thrusting back and forth on top of him.

Stand and Deliver: This is another good one for tight spaces. This time she stands against the wall with her legs slightly spread. He then grabs the backs of her thighs and lifts her up while she wraps her legs around him. As a guide, the female should be able to rest her legs against his hips. While he thrusts away she can help by using the wall behind her for extra leverage.

Melody Maker: If you’ve got a footstool or even a sturdy coffee table, this is something a little different. The female sits sideways with her legs apart. He then snuggles into position and helps her lean backwards so her head is pointing downwards. He grabs hold of her hand for extra support and enters her. The rush experienced during orgasm is apparently greater as the bloody rushes toward the females head, so if you find something to help you get into this position, it’s highly recommend. 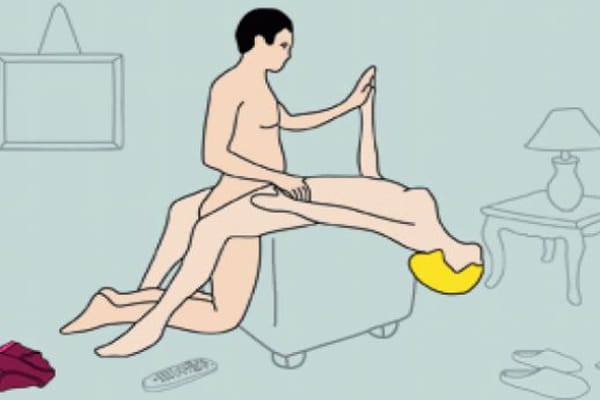 Lap Limbo: The male sits on a chair with his knees elevated. She then straddles him, lowering herself into his lap. The woman can then lean backwards and support herself with her hands on his thighs. She can then bend her knees and place her legs over his shoulders, coming to rest on the back of the chair. He takes charge by grabbing hold of her hips and entering her while she uses the chair as leverage. It sounds trickier than it is!

The Galloping Horse: The woman controls this one as the man sits on a chair or sturdy surface with his legs outstretched in front of him. She can then climb on top of him and position herself in a mirror fashion. The exception is that her legs should be raised off the floor. For support they cling onto each others arms and she can lean backwards, pushing back and forth as she desires.

Tight Squeeze: This one works well on a kitchen counter, or even better – a car bonnet. The female sits on the surface wrapping her arms and legs around the male squeezing him in closer. He stands facing her and does most of the work. For additional variation, try out the Amazing Butterfly (below) using the same surface. 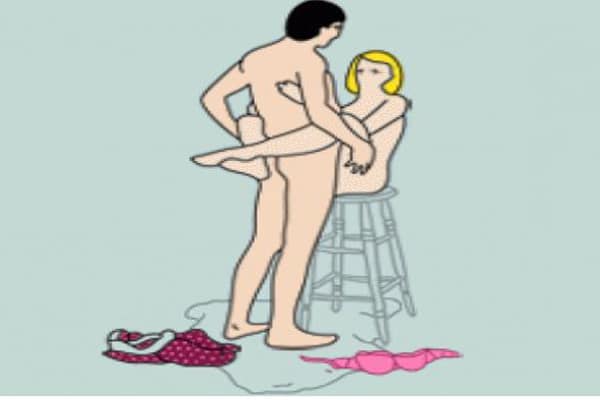 Amazing Butterfly: Using the same or similar surface as above, the women lies flat initially. She should then lift her legs to rest on his shoulders as he stands in front of her. To get the right angle for penetration the women will need to tilt her pelvis to alight.

Sexy Scissors: Here’s one for the men who will love this if they like control. The women lies on some type of workbench or tabletop with her hips positioned on the edge. Her legs should be raised directly facing the sky. The male then stands in front of her and takes hold of her ankles. When he moves his arms he has the choice of penetrating when her legs are closed or spread wide apart.

Hit The Spot: The spot this position is named after is the women’s g-spot. Plus, given the fact that the man does most of the work, this one should be on every women’s must try list! She lies on her stomach with her hips tilted sideways – her legs should be slightly bent. He can then kneel into position between her legs. As he leans in forward, he can then place his arms on either side of her. This will give him the leverage to be able to thrust in and out.

Sex positions for wherever takes your fancy

Backstairs Boogaloo: This one is primarily for a staircase, but if you find a similar surface when out and about, go ahead and give it a go. Ideally, the women kneels in front of her partner and he positions himself behind her. She should reach up to hold onto a banister or a step, which will then enable him the perfect angle for deep penetration from behind.

Secret Shag: Ever felt a bit amorous when sitting on the couch together? Well this one works well when she wraps her legs around the man’s upper body while laying in front of him. He can then grip her thighs and penetrate from behind.

As you can see sex isn’t just for the bedroom. There are plenty of ways to spice it up by trying different positions and different locations. If you’ve got a favorite outside of the bedroom, we’d love to hear about it in the comments below!