The Simpsons Hilariously Predicts What Will Happen If Trump Becomes President

The Simpsons has been known to eerily predict the future in more than one instance (it actually showed Donald Trump as POTUS in an episode 16 years ago), but we sincerely hope this episode and its latest election-video spoof will remain a parody.

In the video titled ‘3 a.m.’, Marge and Homer watch an election ad to make up their minds on who to vote for. The clip spoofs Hillary Clinton’s 2008 ‘3 a.m.’ election ad, only this time it includes Republican nominee Donald Trump, whose antics and distinctive look become the focus.

The fictional election ad starts with former US President Bill Clinton answering a phone call in the White House, only to be put in his place by Hillary Clinton, who tells him all calls will be for her from now on.

The scene then cuts to the bedroom of Trump, who can be seen sitting in his bed rejecting an emergency call because he is busy tweeting and giving questionable orders over the phone. “Put my name on the Lincoln Memorial, make Chris Christie eat a worm just for laughs, disband NATO and make me some scrambled eggs in a gold plate,” he demands while a book titled Great Speeches by A. Hitler rests next to him. 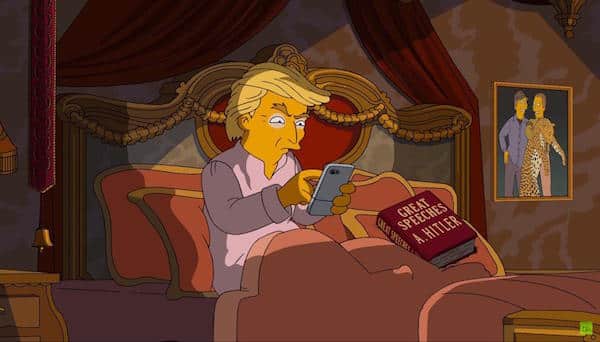 The phone rings again and Trump agrees to come to the Situation Room, but not before five assistants make sure he looks the part. In what is arguably the funniest scene of the clip, Trump gets injected with filler which results in his puffy face, a spray tan is applied to achieve his well-known orange-hued tan, fake big-hand gloves are put on and a small dog is placed on his bald head, which he adjusts so it looks like his infamous full set of blonde hair.

A clock suggests his getting ready took more than eight hours, ultimately making him too late to stop a Chinese fleet advancing. His suggestion over the phone is to simply “build another wall”, followed by the remark “yes, in the ocean, loser”.

The ad finishes with a voiceover saying “Paid by Americans who are really starting to miss Obama”.

As satirical as this Simpsons clip may be, it’s horrifying to think the spoof could actually be closer to the truth than we ever imagined, especially since Donald Trump recently nabbed the GOP nomination.

Watch the video below.

Comment: Do you think the creators of The Simpsons should stay out of the political realm, or are they actually helping the situation?