The old saying: “beauty is pain, darling” takes on a whole new dimension thanks to the latest US weight-loss craze: waist training. Usually, I feel fairly indifferent at best towards Kim Kardashian, but I did feel white-hot feminist rage and incredulousness when I saw her Instagram pics of her “extreme beauty secret” – her corseted waist training – on TV.

RELATED: Year Of The Booty: Kim K’s One Redeeming Talent?

What the hell, ladies?! There are very good reasons for the eradication of all-day corsetry wear – these torture devices, hailing from the 16th century, cause breathing difficulties, crushed ribs – oh and they damage your internal organs. Call me crazy, but surely no amount of skinny waist action is worth this pain and bodily damage?!

Some enlightened doctors called for corsets to be banned as early as the late 19th century, but we have our feminist forebears to thank for their public protests about the damage corsets do to women’s bodies and unborn babies. 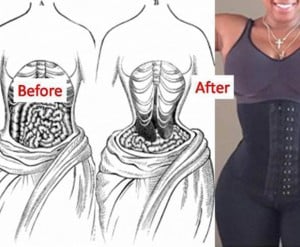 Now, corsetry is being touted as a way to train your body to retain a slim, curvy figure even when you’re not wearing one. What a croc!?

And it’s not just Kim K who’s to blame for this bullshit trend – other celebrities, such as burlesque queen Dita Von Teese and Jessica Alba have long praised the benefits of wearing them, with the latter confessing to wearing not one, but two corsets after giving birth to her second daughter Haven in 2011.

Are these women mad? My bet is Kim K is way too smart (I hope) to be wearing a corset for any length of time for waist training, but is instead being paid a ridiculous sum of money to endorse them via her social media channels.

For, any personal trainer or doctor of repute (like my outraged health practitioners, scathing in their thoughts on waist training) would have surely set her straight as to the extreme dangers, right? Sad but true, nothing matches or replaces the benefits of healthy eating and regular exercise, the old-fashioned way.

Sure, who doesn’t want to lose a few kilos, but are you going to risk your health to do so? Doctors say fainting spells are also a major side effect of waist training, due to the corsets quite literally constricting your lungs and airways. And other health experts have quashed the idea that you can get slimmer over time by wearing corsets, as fat’s squishy, and unfortunately, it bounces back (bugger). 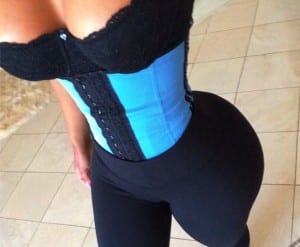 The only positive I can see from waist training is that the restrictive stress of it – while it’s causing you to develop malformation of organs – might make you eat less, by default! And I jest – anyone who tells you waist training is good for you must be selling something. Hang your head in shame, A-list celebrities – what a sick and dangerous message to send to young girls and women.

What do you think? Have you felt pressured to try waist training?

Main image via realitytvmagazine.sheknows.com; cartoon via blackdoctor.org and corset shot via necolebitchie.com.