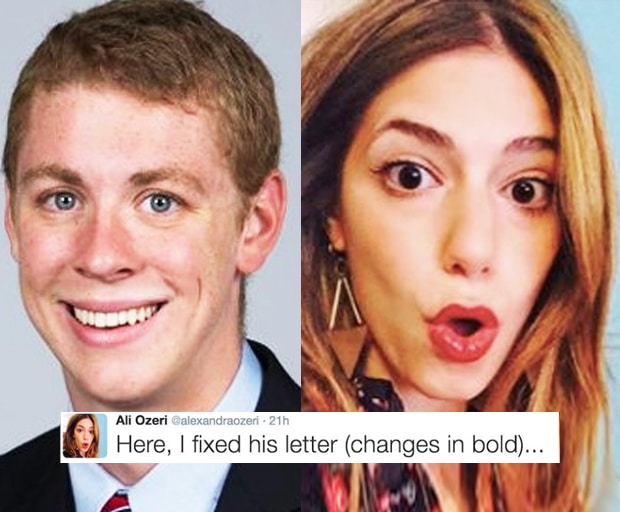 ‘Very respectfully and ignorantly, Dan A, (father of a rapist) Turner.’

Ever since news broke that Stanford swimmer, Brock Turner, who raped an unconscious woman behind a dumpster on campus last year, was sentenced to just six months prison time; a ruling that was retorted by Turner’s father in a shocking statement calling it ‘A steep price to pay for 20 minutes of action,’ the world has been in a state of protest.

Besides igniting a petition to have Turner’s judge stood down, which has now attracted over 1.2 million signatures, Turner’s hearing has sparked a multitude of demonstrations speaking out against rape culture, including a Stanford graduating ceremony protest this week that saw students march holding placards reading ‘Protect survivors, not rapists’.

In a stroke of perfect genius, Ozeri posted a rejigged version of the letter Dan Turner read to the court at his son’s hearing, obliterating the father’s horrifying argument against punishing his once-Olympic hopeful son, adding text highlighted in bold to draw attention to the misogynistic victim-shaming nature of Turner’s comments, which echoed his son’s own disturbingly unaccountable statement.

Ozeri’s clever post has already racked up over 21,000 retweets from fellow Twitter users equally fed up with victim-blaming rape culture. Reading it can only serve to make you a more enlightened human being. Snaps to you, Ali.

Here, I fixed his letter (changes in bold)… pic.twitter.com/qsa8TZWsPJ

Comment: What do you think of Ali Ozeri’s edited version of Dan Turner’s letter?