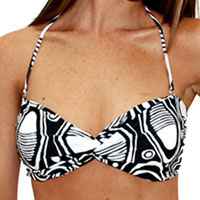 “Zodee is an online retailer only – no bricks and mortar stores, selling underwear and lingerie,” says Zoe who came to Australia after graduating from a degree in Textiles and Clothing in the UK. Initially working for two top swimwear labels Zoe soon realised that there was a gap in the market for pure cotton underwear. So she did what any self respecting chick would do – she decided to design her own undies and set up a web site to sell her (under)wears.

“I happened to be talking to someone one night and a friend of my partner said “Why don’t you sell it on the Internet?” and I laughed because I’d never even surfed the Internet, never even been on a web site. And then I though ‘I can do this.’ I put my range on the web site and two months later, when I hadn’t got any sales, I thought ‘OK, nobody knows my brand, I’ve got to do something about this.’ So I started approaching other underwear companies to get them to sell their products on the site and only one gave me a go that was Lovable and I put Lovable on there. Sales started to increase, because obviously people were looking for Lovable and found it on my web site, then started buying my underwear as well,” she says recounting the early days as an online retailer.

The Zodee mission is to have all brands represented on the web site and at present, some of the world’s top brands are available including Lovable, Crystelle, Elle Macphearson, Bendon, Fayreform, Real Woman and Bonds with Simone Perele and Oroton soon to be added. The Zodee site features sections including Ladies,Maternity and Bridal.

An online underwear store is the perfect place for your shy/clueless-but-well-meaning boyfriend to pick out something nice for you! And while the majority of online underwear shoppers are women, Zodee is noticing an increase in men shopping for undies online, both for themselves and as gifts for their loved ones.

“It’s so much easier, they can go into their wife’s or girlfriend’s draw, find the size, go on the Net, order it and it’s delivered to them” says Zoe. “They don’t have to enter a department store or boutique and be confronted with sales people trying to sell them this, that and the other. Most men know what they want to buy,” she reveals. “They email us if they need any further information or recommendations ‘My girlfriend normally wears this, what would you recommend?’ We’ll email them back text links where they can look the products we’re suggesting and they can just go in there, order it – easy peasy!” says Zoe.

What’s more Zodee offers what would have to be one of the most flexible return and refund policies around, so if it doesn’t fit, or you absolutely loath his well-meaning, but way off the mark gift, you can swap it. “Anyone can exchange, but if they’re a Zodee club member – membership is free – they can exchange free of charge. If the bra they get isn’t the right size, or they’re not happy with it, they can send it back for a full refund, or we’ll dispatch a different size to them at no extra cost, so that’s a benefit of being a Zodee club member.” Now that’s what we call service.

Visit Zodee online to view the gorgeous range of underwear available to buy sexy, classy and and not a peek-a-boo bra in sight! Phew!