Women Protest Insanity Of The Tampon Tax In Hilarious Style

All over the planet, women are shaking their fists in frustration over the highly controversial ‘tampon tax’ and the lunacy of subjecting tampons and sanitary pads to the same taxes as stationary and cheese, and classifying them as ‘non-essential luxury items’. Another great #facepalm for the male-dominated governments of this world who’ve deemed menstruation trivial enough to be handled without the aid of sanitary products.

Although laws vary across the globe, the principle is the same. After the UK joined the Common Market in 1973, a 17.5 per cent Value Added Tax (VAT) was introduced on tampons and pads. After lobbying by Labour MP, Dawn Primarolo in 2000, the tax was reduced to 5 per cent. However, over the last month British MPs have voted against an amendment to chancellor George Osborne’s finance bill to remove VAT on tampons and pads altogether. The trend spreads to Europe as well. French MPs recently voted against reducing the rate of VAT on sanitary products from 20 per cent to 5 per cent. In Slovakia, it’s also a whopping 20 per cent.

In Western society, paying an extra dollar or two for a packet of tampons isn’t going to break the bank. Sanitary products are expensive anyway; what’s an extra 10 to 20 per cent of that going to do? However, the numbers aren’t what have most women seeing crimson. The fact mostly-male governing bodies can deem tampons and pads ‘luxury items’ and legislate accordingly is just plain rude.

Speaking from experience, there is nothing luxurious about having your period. I actually cannot think of anything less luxurious or appealing than bleeding for five days straight, 12 times a year. And to add insult to injury; items deemed non-taxable and by proxy ‘essential’ include exotic meat, alcoholic jelly shots, Jaffa Cakes, and – wait for it – edible sugar flowers. What?!

In retaliation to the utter stupidity behind this thinking, women have taken to social media to protest in hysterical style, proving the sheer laughability of calling ANYTHING to do with our periods a ‘luxury’. 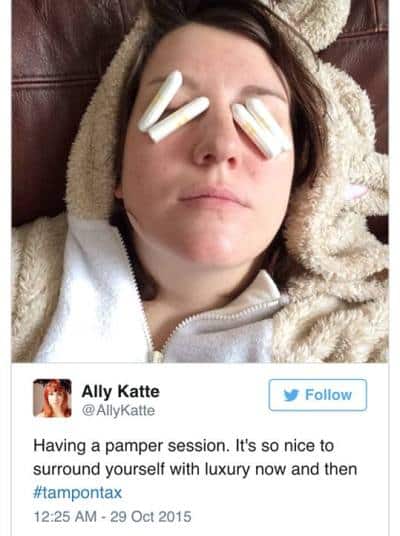 In Australia, Sydneysider Mia Lethbridge has released an ingenious rap protest to the tune of Snoop Dogg’s Drop It Like It’s Hot, entitled, Drop It ‘Cause It’s Rot on YouTube, which includes a cameo from Australian ex-Prime Minister, Tony Abbott’s sister, Christine Forster and features lyrics like, “”I b-l-e-e-d just coz I was born as me, so I pay the GST, coz menstruation ain’t for free.”

In the UK, comedians Jenny Bede and Cariad Lloyd have crafted an equally impressive spoof targeting the government’s preposterous tax, made to Taylor Swift’s iconic Bad Blood, which comically suggests women try using non-taxable items like potatoes and woollen socks as alternatives to tampons; “You can try what you can ’til the tampon tax goes…If it don’t go soon, blood will flow.”

As these clever protests so flawlessly demonstrate, until the world sees sense and alleviates a tax on items that are wholly necessary to a woman’s health and hygiene, we’re just going to have to keep our sense of fun. Now excuse me while I go relax with a book, some gourmet chocolate, and my oh-so-luxurious packet of heavenly Tampax.

Images via twitter.com and youtube.com