I nod. He holds out his hand, and in his palm are two shiny silver balls linked with a thick black thread.

“These are new,” he says emphatically.

I look questioningly up at him.

“I am going to put these inside of you, and then I’m going to spank you, not for punishment, but for your pleasure and mine.” – Fifty Shades of Grey 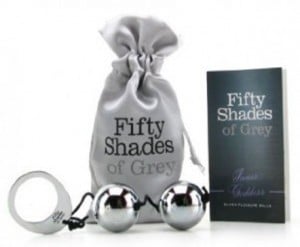 The extract above is from the 2011 E L James bestselling book. It remains to be seen if the sex balls, as I like to call them, will feature as prominently in the highly anticipated film adaptation due out around February 12.

The weighted balls are worn inside the vagina and have long been used to strengthen pelvic floor muscles – but can they, as Fifty Shades of Grey’s female protagonist Anastasia Steele experiences – also bring you to orgasm? 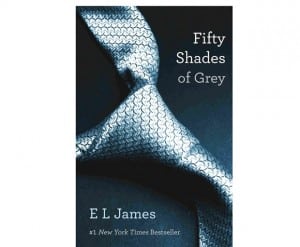 In the book, Anastasia suddenly turns nympho – “needy for sex” ­– after wearing said balls and almost has an orgasm after infamous male protagonist Christian Grey “jerks them out…suddenly”.

So, can we expect the same, if we wear the balls in real life? Sadly, no.

Leading Australian sexologist Dr Nikki Goldstein says do your research before use when it comes to the balls and, importantly, they’re not recommended for young girls. “On a pelvic floor basis, these balls are great,” Dr Goldstein says. “They can strengthen your muscles and aid bladder control.

“They’re also great if you forget to do your pelvic floor exercises (also called Kegel exercises).”

But what about the big O? Surely, Fifty Shades of Grey’s famous sex scene isn’t a fake?! Dr Goldstein says strong pelvic floor muscles can help you to have more orgasms, and strengthen the intensity of your big Os, but as for the balls themselves, it’s not the usual practice for them to be used for sexual enjoyment. What the hell E L James?!

“But I’d be reluctant to tell people to use them exclusively for sexual pleasure.”

Note well, ladies: do not put the sex balls in your anus as there’s a high likelihood the balls will, erm, disappear, according to Dr Goldstein. 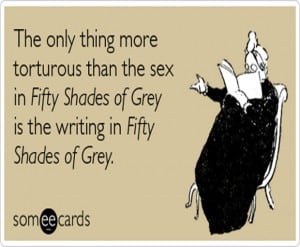 So, what’s the moral of the story here, ladies?

“Do not use Fifty Shades of Grey as a text book on sex!” Dr Goldstein says. “It’s a fantasy novel, not a sex education book.

“But it just goes to show that people are craving information about sex topics.

“My final advice would be definitely do not expect to almost have an orgasm just by using the balls.”

Does spanking by a hot man help?

What do you think? Have you tried using the sex balls?

Secondary image via fiftyshadesaddicted.com;  book image via www.npr.org and cartoon via www.wheresmyglow.com.