Ask Nadia: Is There Such A Thing As A ‘Male G-Spot’?

7 G-Spot Hacks You NEED To Know

Ladies, listen up. These G-Spot hacks will change your life…

Take pillow talk to the next level.

How To Hit The P-Spot (And What It Actually Is!)

Here’s exactly how to hit P-spot, and why it’ll take your man’s pleasure to the next level…

How The Shape Of Your Vagina Affects Your Orgasm

Could a designer sex toy treat my vagina to a designer orgasm? I was about to find out…

And, no, we’re not talking about hanging out the washing.

14 Things You Almost Certainly Didn’t Know About Your Vagina

Bring on the Christmas cheer with these cheeky gifts.

It’s time to get frisky.

Thankfully, as it turns out, there are a plethora of everyday household items that can be used as sex toys.

It’s important to be inventive in the bedroom to keep things interesting, but you don’t have to spend hundreds of dollars to get off in fun new ways. In fact, the possibilities are pretty much endless when you get creative with what you already have in your home.

Just be cautious, as risks always exist with any improvized sex toy. You don’t want your night of passion ending up in the emergency room. So always be clean, cautious, and go easy.

Whether you’re playing alone or have someone to join in on the fun, here are eight household objects that’ll help you get to Pleasure Town even faster…

A multi-use kitchen utensil most of us use to whip up post-coitus pancakes with, now your humble spatula can help put you in the mood, too. Spatulas are smooth in texture and non-sharp, so perfect for stroking the body with and then delivering a nice swift spank. To find your spanking threshold, simply start soft and work your way up in intensity.

You could spend your pay packet on the latest G-Spot stimulator, or you could head to your fruit bowl and improvize instead. Bananas are curved perfectly to hit your G-Spot with little effort required – just make sure you put a condom on first and use one that’s fairly firm. Alternatively, a banana skin makes the perfect sheath for guys to slide their penis in and out of for ultimate stimulation during foreplay.

Why not get ready in the morning then take your beauty tools back to bed with you? A hair brush can tickle and tease all of the erogenous zones of the body quite like nothing else can. Go soft or hard bristle, or even mix it up by swapping between the two; then work in circular motions over the body to get the blood pumping in all the right places.

Warm rushing water on your clitoris is a guaranteed way to get off quickly and cost-free when you’re home alone. Alternatively, using your shower time as a pre-sex warm-up to get you in the mood is a great way to get clean and dirty with your SO at the same time…

For the times when you’re feeling a little lazy, let your washing machine do the hard work for you. Sitting on the washing machine while having sex will vibrate your entire body, giving you a head-to-toe earth-shattering orgasm. You’re welcome.

Chill metal spoons in the freezer then massage them over your partner’s erogenous zones (read: lips, nipples, thighs) for a sexy foreplay sesh that’s oh-so cool.

Comment: What household items have you discovered also double as DIY sex toys?

And we’re not talking about sleeping.

This Is How I Found My G-Spot

Who knew it was so easy to find?

Sex Fact Vs Fiction: Does The G-Spot Exist?

Does the G-Spot actually exist? And, if so, where the hell is it?

Never fear, dear readers, SHE SAID has got the fast facts on this one. This common sex myth irks Sydney sexologist, Dr Michelle Mars no end. For Dr Mars – who specialises in the sociology of sex gender and sexual well-being – says that despite many scientific claims to the contrary, the G-spot does in fact exist! “Best scientific evidence is that it does exist!” Dr Mars says.

“Science backs up my own experiences on this one. In an article published in the Journal of Sexual Medicine in 2012, a group of experts concluded that ‘the assumption that women may experience only the clitoral, external orgasm is not based on the best available scientific evidence’.

“I think it’s a myth that it doesn’t exist because a lot of knowledge about female pleasure has been lost over the centuries and the idea that clitoral stimulation is required for orgasm has become pervasive.

“Women who gushed a lot were embarrassed and sometimes not sure they had urinated.

“Plus, not everyone knows how to do it so it might be something that only happens occasionally. We think sex is something you just do not something you can learn about!” 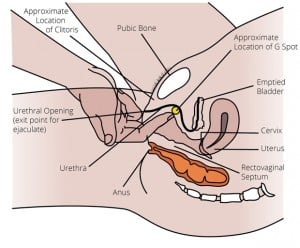 The G-spot, also called the Gräfenberg spot (after German gynecologist Ernst Gräfenberg), is said to be an erogenous area of the vagina that, when stimulated, may lead to strong sexual arousal, powerful orgasms and potential female ejaculation. So, where the bloody hell is it, exactly? “It’s a cluster of nerve endings near the entrance of the vagina,” Dr Mars says.“Some women are more aware of sensation than others.

“The G-spot is about two inches inside the vagina toward the front of a woman’s body.”

Dr Mars’ best sexpert advice in finding the G-spot is to tread carefully. So, do couples need to use a torch? “No!” she laughs. “If you’re exploring the G-spot, take the time to make it sexy, go slow, go in shallow, get the angle right, in and up. Keep the pressure firm.

“Be aware that it can take time; getting better at any kind of sex doesn’t happen overnight.

“It’s very obvious for some people, but for some women it’s just a dribble and they may not be aware of extra moisture until they stand up and move around.”

So, can you survive sex – indeed life – without experiencing G-spot vaginal ejaculation? “It’s another kind of pleasure, partners feel pleasure when they make their partners feel good,” Dr Mars says. “Learning to have fun with the G-spot is important because it opens up new avenues of pleasure and stimulates new neural pathways for pleasure.” 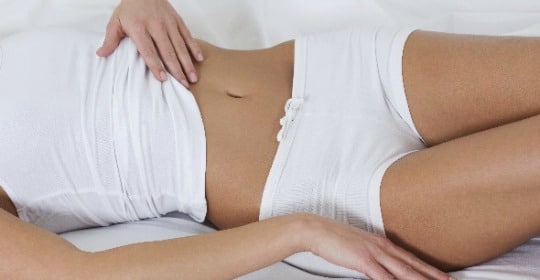 Interestingly, Dr Mars says that while only women have G-spots, men have what’s called a “P-spot”. Stay tuned for more on that soon, ladies.

What do you think? Have you found the G-spot?

Between the sheets – Ask him to give you a belly orgasm.

Yeah, we hadn’t heard of it either!Sit erect on the edge of a chair. He should stand behind you and place his hands, pointing downwards, in a triangle on your abdomen-and rub. You’ll feel your ovaries get warm and tingle a bit. Breathe deeply. You’ll soon begin to feel a sexy buzz.

Get him to tickle your Ahh! zone.

Known as the anterior fornix zone, it’s a soft, squashy bump located on the front wall of the vagina between the G-spot and the cervix. This hot spot, kind of like a second G-spot, has awesome bliss potential-studies show that stroking here helps women to become easily lubricated and experience single or multiple orgasms during sex.

Hear this: Ears are an underrated erogenous zone.

The lobe and the small area behind the shell have a hot line to the nerves. Stimulation from a darting tongue or a light, probing finger can be a powerful aphrodisiac especially when combined with heavy breathing into the ear. Some men find it so exciting they actually climax from it.