Would You Date A Guy With A “Man-icure”?

If a bloke turned up at your door, ready to whisk you away for a hot date, would you bat an eyelid if he was sporting the new OPI colour collection?

I’ve long thought that the state of a man’s hands tell you much about him, such as whether he’s getting intimate lady time. I’m thinking grubby, filthy, half-chewed fingernails are a dead giveaway of no play.

Good news ladies, erm I think: male nail art, or “man-icures” are big business right now – at least, according to Amazon. The shopping giant recently credited a “male varnish effect” for the fact that its nail products were selling like hot cakes.

Amazon says it has recorded a whopping 90 per cent rise in sales of nail gem decoration and a 98 per cent increase in UV nail polish, nail stripers and nail strengtheners.

Of course, it we look to Hollywood, male nail art is nothing new – check out these pics of the perennially-cool Johnny Depp rocking blue nail polish; suave singer/songwriter Seal (pictured below) showing off his bright yellow “man-icure”; and, of course, the hilarious and uber-talented Brit stand-up comedian, actor and writer Eddie Izzard (pictured below), who’s long been a fan of a pretty mani. The latter is committed to running for London Mayor in 2020, so male nail art may yet get a lot more cred in conservative arenas. 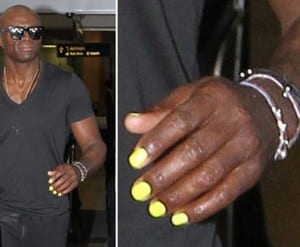 Long loved by 80s hair bands, male nail art is also embraced by the very manly guitar god Dave Navarro; the hottest ginger on the planet, Prince Harry, and the super-sexy soccer star David Beckham. But do you have to be an A-list male celebrity to pull this look off? 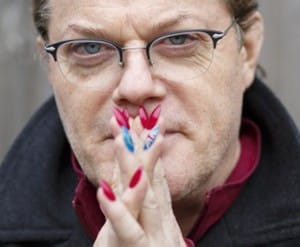 Now, while I’m not sure if you have to worry too much just yet about your average red-blooded Aussie male raiding your nail polishes, the internet is rife with blogs (pictured below) by seemingly normal guys who like nail art (not that there’s anything wrong with that). 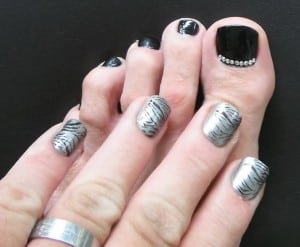 And local bloke folk who have been known to sport a nice manly polish in public include comedian, TV host and writer Wil Anderson and Daniel Johns of Silverchair fame.

So, is male nail art to be shunned or applauded? I say let’s embrace it – it’s a sign of the metrosexual times in which we live, and a big positive surely, if men are spending more time on their self-care and appearance?

Maybe the blokes should just keep their mitts off our beloved Chanel and OPI though, and instead stick to male nail polish brands like Alphanail and Evolutionman! Some things should not be shared.