Plagiarism: Is Imitation The Sincerest Form of Flattery?

“Every artist is a cannibal/every poet is a thief/all kill for their inspiration/and then sing about their grief” – U2, The Fly

Life is short, run your own race, so the saying goes, but what if someone makes like a copycat and steals your thunder? What if you’ve spent hard work and toil crafting up the perfect piece of prose (at least, in your own mind) and some bastard comes along and plagiarises your words?

Or, say you’ve spent hours problem-solving at work, only to fix the issue and then your heinous boss swoops in and steals all the credit from management above? Oh, the rage! Oh, the vast and infinite horror.

Related: How To Cope With A Bad Boss

One thing I’ve learnt the hard way in life is that just because you have personal ethics and a moral code, it doesn’t mean others will behave accordingly. Plagiarism in the digital age is seemingly both widespread and very difficult to prove. It’s unethical and lazy at best and it really hurts when it happens to you, trust me.

A common explanation of what constitutes plagiarism is: “using the words or ideas of others and passing them off as your own”. Unfortunately, as in my case, there’s no copyright in an idea, unfortunately. Only the expression of an idea. And it’s certainly no fun having your ideas stolen at work and your good efforts eroded by an unscrupulous boss, either.

This is an all-too common workplace conundrum: the boss who doesn’t offer anything by way of praise or acknowledgement, and whose utter ruthlessness means they will constantly seek to bask in the limelight of your brilliance. Sure, imitation is the sincerest form of flattery, but that’s not much consolation when you’ve been blatantly ripped off. So, what can you do about the problem? Is it best to confront your thief?

Or would a better approach be to rise above this cowardly crime against humanity, secure in the offending person’s bad karma? A more zen Buddhist approach, if you will? And what motivates the ideas bandit? Is it a lack or original ideas, or just plain laziness? So many questions… 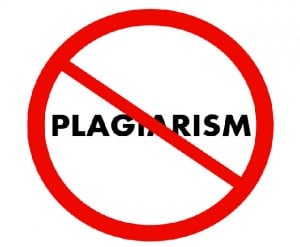 Psychologists say while it’s normal to be inspired by others’ work, it’s highly unethical and unprofessional to plagiarise. My go-to clinical psychologist source, who wishes to remain anonymous, says plagiarists are driven by the desire to be seen to have original ideas, the wish to not appear to be a copycat and good, ol’ professional laziness, as I picked.

Also, it’s far easier to rip off someone else’s work than come up with your own ideas.

“If your ideas are plagiarised it’s hard not to feel ripped off,” the psych says. “However, mental health workers recommend that, in the interests of your own mental health and well-being, you deal with the matter by firstly expressing your outrage in a calm, non-confrontational way, and then let it go.

“If necessary, do some positive thinking, for example: ‘It’s a compliment and an indication of high regard for my ideas/work’.”

Main image via indiereader.com and secondary image via cimethics.blogspot.com.