15 Things You Didn’t Know About Orgasms

The human body is seriously so interesting…

Beauty has its drawbacks, apparently.

It’s Never Too Late To Start Your Life Over Again

Because you only get one shot at life.

Study Finds Consuming Artificial Sweeteners May Actually Be Reducing Your

The Curious Case Of Why Women Are Still Doing The Dishes

I’m not snarky, I’m just getting my creative juices flowing.

If you’re looking for love chances are you’re not going to find it on Tinder, with a new study revealing that a large proportion of users aren’t actually single.

Just how many, you ask? According to research conducted by Global Web Index, a whopping 42 per cent of potential Tinder partners are already in a relationship, with only 12 per cent of them reportedly admitting to it. What’s more, 30 per cent of them are married! As if the dating game wasn’t already depressing enough.

The app, which launched in 2012, has become an incredibly popular dating platform with a reported 50 million users every month; 12 million of which are matched every day. When looking at those statistics it’s cringe worthy to think that nearly half of these people are lying their way into people’s lives, or worse – their pants.

Tinder has since responded to the findings, saying it’s a “totally inaccurate depiction of Tinder’s user base” because it doesn’t have access to “real data on our millions of users worldwide.”

However, Global Web Index are standing by their study, and insisted in a statement that it’s the “largest on-going study into the digital consumers.” They continued: “Tinder’s assertion that our methodology is severely and fundamentally flawed is simply not correct. We only publish statistically robust numbers, and self-reported survey data is widely recognised as an effective way of understanding consumer behaviour.”

The study also revealed that Tinder is dominated by men — hardly a surprise if you’ve ever used the app — with a 60 to 40 ratio when compared with female users. So does this indicate that the platform shouldn’t be used for serious dating purposes? Sure, if you want to look at the glass half full 58 per cent on Tinderers are still officially single, however it’s still a worrying concept to come to terms with if you are in fact looking to find your perfect match.

Our advice? Proceed with caution.

Have you ever had a bad experience on Tinder?

Have Scientists Found A Way To Stop The Ageing Process?

Every woman’s dream is to age gracefully, if at all. Well, listen closely ladies, because it seems we’re one step closer to making that a reality, with scientists discovering a genetic breakthrough that could stop the ageing process.

Researchers studying a rare age accelerating disorder called Werner syndrome recently came across a genetic fault that causes people with the condition to age prematurely. What’s this go to do with me, you ask?

What they found was that a deterioration of DNA cells may contribute to the ageing process, which according to scientists suggests that the way our DNA is packaged could hold the key to slowing human ageing. What’s more, the research also indicated that this process could play a role in diseases such as cancer, diabetes and Alzheimer’s disease.

The study, which was published in the journal Science, revealed that when researchers tested the cells of patients with Werner syndrome, they discovered that the chromosomes in these cells were slightly messier than normal. In case you’re wondering, this apparently causes cells to age quicker.

“Our findings show that the gene mutation that causes Werner syndrome results in the disorganisation of heterochromatin, and that this disruption of normal DNA packaging is a key driver of ageing,” professor Juan Carlos Izpisua Belmonte – geneticist and one of the lead authors of the study told the Daily Mail.

“More broadly, it suggests that accumulated alterations in the structure of heterochromatin may be a major underlying cause of cellular ageing.

“This begs the question of whether we can reverse these alterations – like remodelling an old house or car – to prevent, or even reverse, age-related declines and diseases,” he continued.

However, before you throw away your anti-wrinkle creams and skip on the sunblock, professor Ilaria Bellantuono from the University of Sheffield insisted that we’re still a long way from acquiring the fountain of youth.

“While in future it may be possible to use the knowledge developed to devise new interventions to slow or reverse human ageing, this is far away in time,” she said to the Daily Mail.

“We need to remember that this study is conducted in a single cell type whereas ageing is a complex multifactorial process which affects several systems.”

Okay, ladies, if you’ve ever lied about your age, income or residency on a first date, you’ve been caught out! A new study has revealed that a whopping 61 per cent of both men and women lie about themselves on first dates, and to our surprise, the fibs differed greatly between genders.

Activity website Chillisauce found that the fellas were most likely to talk up their income, adding a sizeable 20 per cent on top of what they actually make, while the ladies were all too happy to bump nearly four years off their age. Oh, the deceit!

Apparently working as a secretary, receptionist or labourer doesn’t cut it nowadays, either, with both sexes admitting to lying most about their occupation. Men confessed to telling their dates they were an entrepreneur, pilot or invest banker, while the ladies were most likely to insist they were a teacher, interior designer, or wait for it… a model. Obviously some people don’t realise Instagram isn’t an agency.

It’s not all doom and gloom, however. The study, which surveyed 8000 Brits, highlighted that unlike us, males were rather truthful about their age and where they grew up. And the females? We’re apparently more comfortable opening up about our wealth and previous relationships. Go figure!

Now, before you call bullshit on your latest Tinder or RSVP date, in the survey it was noted that 44 per cent said they’d come clean by the third date – a good indication that they plan on sticking around. On the contrary, however, 25 per cent of participants said they would only confess if they were caught out. Time to ask your pilot lover to see his plane? Absolutely, girlfriend.

As for the ultimate first date turn-off, most women agreed that overconfidence was a potential deal breaker. In saying that, though, we were also the most forgiving when it came to a date who talked about themselves too much. It must be all those free flights they’ve promised!

For centuries men have been all about the butt, and the bigger the better. But new research has revealed that the reason behind men’s interest in a prominent backside stems from evolution, and might actually come down to a curved spine as opposed to how much junk a women might carry in her trunk.

“What’s fascinating about this research is that it is yet another scientific illustration of a close fit between a sex-differentiated feature of human morphology — in this case lumbar curvature — and an evolved standard of attractiveness,” said the study’s co-author and psychology professor, David Buss.

“This adds to a growing body of evidence that beauty is not entirely arbitrary, or ‘in the eyes of the beholder’ as many in mainstream social science believed, but rather has a coherent adaptive logic.”

The study, which was published online for Evolution and Human Behaviour, saw more than 300 men rate the attractiveness of female silhouettes that had curvatures ranging from 26 to 61 degrees. Most men had a preference of 45.5 degrees, which scientists insisted was the optimal angle for ancestral women to forage productively and carry children. 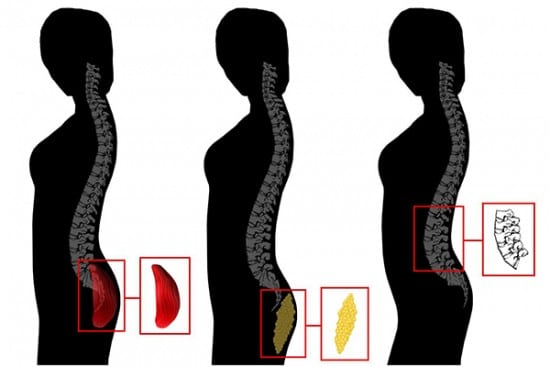 “This tight fit between evolutionary pressures and modern humans’ psychology, including our standards of attractiveness, highlights the usefulness that an evolutionary approach can have for expanding our knowledge not just of the natural sciences, but also the social sciences,” he concluded.

So in other words, according to scientists, our concept of beauty might be reverting back to evolution in which a beautiful woman was someone who could bear healthy children and remain active while pregnant. Does this mean we will be seeing a rise in spinal shaving surgery procedures as opposed to butt implants?

The Nature World News reported that a 45.5 degree curve makes a female’s behind look larger, because it protrudes more obviously than a smaller curve – this is despite how full her posterior might be. So perhaps a word to Kim Kardashian: It’s your spine that men are attracted to, not your perky, peach shaped and fuller backside.

Images via Shutterstock and eurekalert.org

Just when you thought we were making progress in the fight for gender equality a new report has been released that revealed there are fewer women CEOs in the workforce than CEOs named John. That’s right, more men named John run companies than women altogether!

RELATED: Amal Clooney: In The Spotlight For All The Right Reasons

The US study conducted by Ernst and Young says: “Only 16 per cent of S&P 1500 board seats are held by women – less than the proportion of seats held by directors named John, Robert, James and William.”

This means that for every women on the board, there are four Johns, Roberts, James’ and Williams’. That’s not even including blokes with a different name. Furthermore, the study also went on to reveal that the proportion of women on boards has increased by “only 5 percentage point over the last 10 years.”

And while it’s still positive that the number has actually increased, Ernst and Young revealed that the companies had grown in size, raising the question as to whether “boards are holistically refreshing or simply adding more directors?”

So does this mean that the gender gap isn’t closing like we’re led to believe and findings are actually based on larger board sizes?

“In general, more women are being appointed to board and executive leadership positions though change continues to be gradual,” according to the study.

They say slow and steady wins the race, but if this study is anything to go by it appears the race is dominated by males. So let me ask you: Should we be stepping outside our comfort zones and pushing even harder for more female contenders, or is the corporate hierarchy just more appealing to men?

The average male mobile user makes almost 60 per cent more phone calls in a week than the average woman—but she’ll send 10 more text messages, the latest research from Roy Morgan shows. Mobile phone users in Australia made an average of 27 calls and sent 43 text messages per week in 2013, but across all age groups, men out-call women and women out-text men.

The average man makes 12 more mobile calls a week than the average woman (33 to her 21) while she sends 48 texts to his 38. The biggest gap in mean phone call numbers is among mobile users aged 35-49, where men make 18 more than women per week. Meanwhile, the average female aged 14-17 sends 91 texts in a week (an average of 13 a day)—nearly twice as many as a male her age.

Texting is highest among 18-24 year-old women, who average 105 messages a week, or 15 a day. Women out-text men in all other age groups too, although the difference is narrower.

“Male and female mobile users are fairly equal with regard to their usage of mobiles for calling and texting overall, with men making a combined 71 calls or texts compared with 69 for women. But while texting is the more common communication method for both sexes, women of all ages display a much stronger preference for just sending a message.