Just when you thought she couldn’t get any more awesome.

The Australian schoolgirl was diagnosed with bilateral inner-ear loss, a degenerative condition that results in progessive hearing loss, and is slowly going deaf. And her first concern on discovering she’d one day lose her hearing was that she wouldn’t be able to hear Taylor Swift sing. (Could she be any more adorable?!)

So, unsurprisingly, it was Hope’s ultimate dream to meet and hear Tay play live in concert before losing the rest of her hearing.

So with the help of her twin sister Chloe, she launched the hashtag campaign #HelpJorjaMeetTaylorSwiftSydney and spent several weeks in the lead-up to the concert taking to social media to try to make her dream of being united with her ultimate girl crush a reality, bolstering her efforts of getting noticed by Tay’s posse with a Facebook page entitled, ‘Help Jorja Meet Taylor Swift In Sydney 2015’. 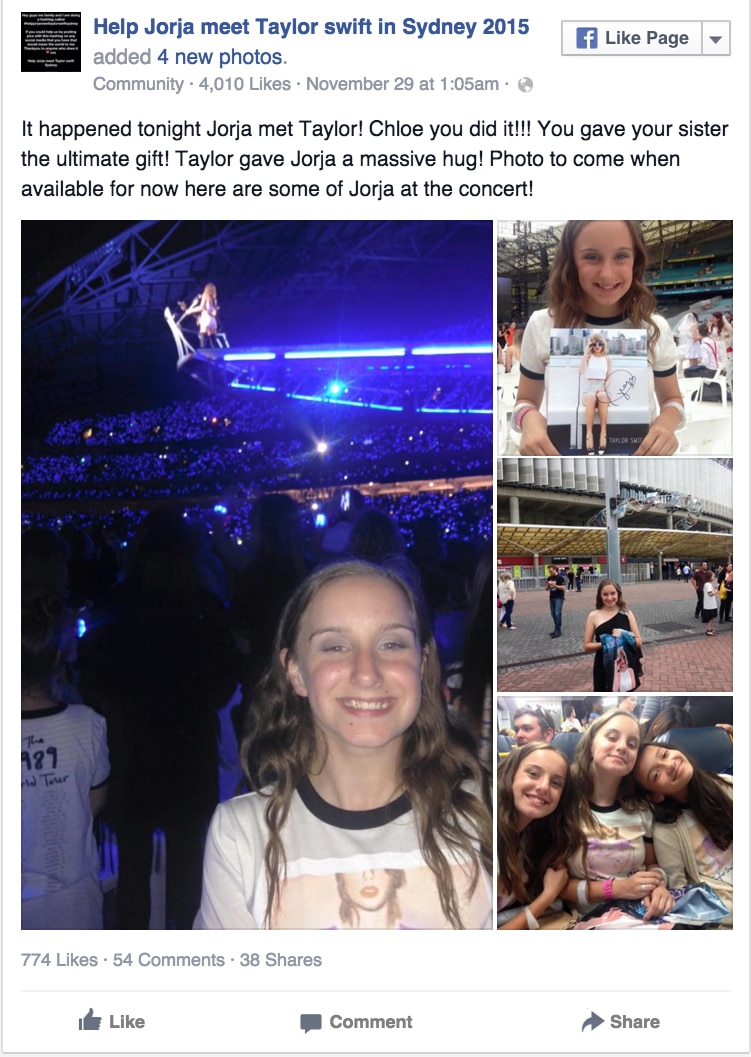 And being the legend she is, at her Sydney concert this weekend, Taylor took note.

“It happened tonight, Jorja met Taylor! Chloe you did it,” a Facebook post on a page created by the Hope’s twin sister read.

“You gave your sister the ultimate gift! Taylor gave Jorja a massive hug!”

So what was it like having her dream fulfilled and coming face to face with a living legend?

“She was very, very amazing and very pretty. I didn’t expect her to be as tall as she was,” Hope told the Maitland Mercury after capturing the moment in a photo with her celeb idol.

And it didn’t stop there. Being the true goddess she is, Tay gifted the twins with prime seats for the ANZ Stadium show and its 76,000 strong crowd where Hope got to dance the night away with an up-close view of the pop star.

“It was very, very fun, we danced all night.”

Images via maitlandmercury.com.au and facebook.com.