A Camerawoman Is Facing Criminal Charges After Being Filmed Kicking Refugees

“I am practically in shock from what I did, and what was done to me.”

It was an incident that made everyone shake their heads in disbelief. A Hungarian camerawoman was filmed kicking and tripping a man and his son while filming refugees crossing the Hungarian border in September last year.

In the shocking video, a man is seen stumbling away from a Hungarian policeman, clutching a bag in one arm and his son in the other; camerawoman Petra Lazlo then throws her leg out into his path, causing him to trip and fall.

Now Laszlo has been indicted and will face charges for the incident, which Hungarian prosecutors have described as a “breach of the peace.”

Laszlo worked for the internet based news channel N1TV and was fired soon after the video, in which she can be seen kicking children and tripping two refugees, went viral.

“An N1TV colleague today behaved in an unacceptable way at the Röszke collection point. The camerawoman’s employment contract has been terminated with immediate effect as of today; we consider the matter closed.”

The channel is affiliated with Hungarian’s nationalist right-wing party Jobbik.

Laszlo had apologized last year, but defended her actions saying she was panicked.

“I am practically in shock from what I did, and what was done to me,” she said.

“I am not heartless [or] racist … I am a woman, a mother of small children, who has since lost her job, and who made a bad decision in panic.” 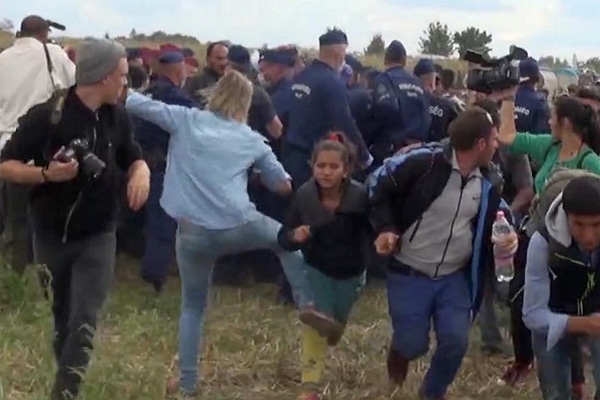 Laszlo says her life has been ruined by the incident, and that she’s since been called a “heartless, racist, children-kicking camerawoman,” and received threats from members of the public online, with some Facebook groups being set up to avenge her crime, offering $20,000 for her murder.

“I can definitely say that my life is ruined. It’s unlikely that I will be able to find a job and do what I like the most,” she told Russia’s Izvestia newspaper.

The man seen being tripped by Laszlo in the video is 56 year-old Syrian football coach, Osama Abdul Mohsen. The father had fled Syria’s civil war with aspirations to build a new life for himself and his family in Europe. Though the incident with Laszlo is sparking global outrage, Mohsen says he doesn’t hold a grudge toward the camerawoman.

“I am now busy with other things, and I do not want to think about her,” he told news site Aljazeera.

Mohsen is now settled in Spain and awaiting the arrival of his wife and two children, who are still in Turkey. He’s currently working to earn enough money to send home to his wife, son and daughter to ensure they don’t go hungry. The family was briefly united for the first time in more than a year in December.

Csongrad county chief prosecutor Zsolt Kopasz released a statement explaining “the violent actions of the accused did not inflict injury, however her behavior was capable of provoking indignation and outcry in the members of the public present at the scenes.”

Laszlo’s trial will be held in Szeged, a Hungarian city close to the Serbian border.

Image and video via youtube.com and Marko Djurica/Reuters.