The Girl Who Fell From The Sky: Emma Carey On Living As A Paraplegic

“It was really bizarre, just no part of me believed it. When doctors said I was paraplegic, I never thought for a second it was true.”

When most of us opt to get a tattoo of a specific date emblazoned on our bodies, it’s usually to commemorate a special moment; the day your child was born, the day you got married, a loved one’s birthday.

But for Emma Carey, the Roman numerals, IX VI MMXIII – June 9, 2013 – inked on the inside of her arm, don’t represent a day filled with joy. Instead, they signify the most tragic moment of her life.

It’s fair to say, Carey is not your ordinary 25-year-old woman. In fact, my interview with her didn’t go as planned at all. I was familiar with the inspirational outlook she promotes via her social media channels, but also somewhat cynical as to how positive the reality of having her ability to walk taken away at such a young age would be, behind the motivational captions and beautifully posed images. Perhaps I also wanted to justify the times in my own life I’ve failed to be grateful for things I really shouldn’t take for granted.

But as our phones connected, and Carey began to share her story with me, my preconceptions quickly shifted.

On June 9, 2013, at just 20-years-old, she climbed aboard a skydiving helicopter in the Swiss Alps, five days into what should have been a three-month European backpacking vacation; completely unaware that her life was about to dramatically change forever.

“I always knew I was going to skydive in Switzerland. I’d been so excited for it and loved the helicopter ride up and the initial free fall. It took a while to realize something was wrong, I guess because it was my first time and I didn’t know what to expect, but then the instructor stopped answering me. 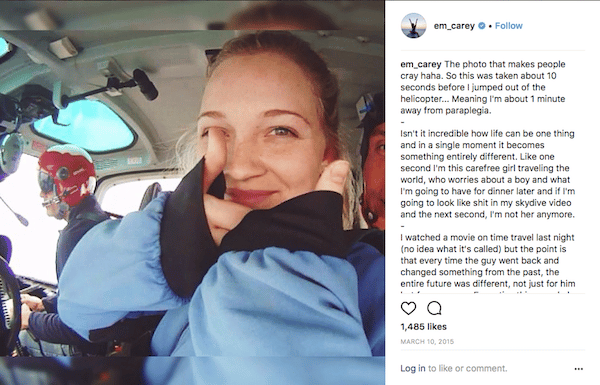 “I suddenly realized that we weren’t just gliding around, it was straight down. I just felt like we were going way too fast. And while I felt scared the whole time, I thought maybe the instructor was going to fix it or maybe this is how it was meant to be.

“But the closer we got to the ground it became very obvious.”

The tangled parachute had failed to fully open, and the cords had wrapped around the instructor’s neck, strangling him unconscious.

Quickly approaching the ground from 14,000 feet above, Carey was widely conscious and accepted the certainty of her death.

Though still alive, the instructor remained limp, strapped to her back as she broke his fall, landing flat on her stomach. Moments later, in an attempt to get up to find help, Carey made a stark comprehension of her injuries.

“I realized I couldn’t move my legs at all. I was terrified. I just couldn’t understand why, as I was trying to use them like I always have, and they just weren’t moving.

“It was the most bizarre, scary feeling to not be in control of your body anymore. And I just remember thinking, first confused, but secondly, “there’s no way that I could live a life without my legs working”. I just didn’t want to do it.

“At the time, I didn’t know anyone in a wheelchair, or anyone who was paraplegic, and I initially thought, how do you get around? How do you get in a car? I was so confused as to how people actually lived like that.”

Her travel companion, who Carey had convinced to skydive, landed safely, shortly after.

“It would have only been a few minutes, but it seemed like forever waiting for her,” Carey recalls.

Later in hospital, doctors advised the then-20-year-old she would never walk again. She had broken her pelvis and spine, with an irreparable L1 spinal cord injury.

“It was really bizarre, just no part of me believed it. I was obviously in shock and denial, but when doctors said I was paraplegic, I never ever thought for a second that it would be true. And I don’t know if I had a feeling that I’d get better, or if I was in denial. But it never came to my mind that it would actually be true.” 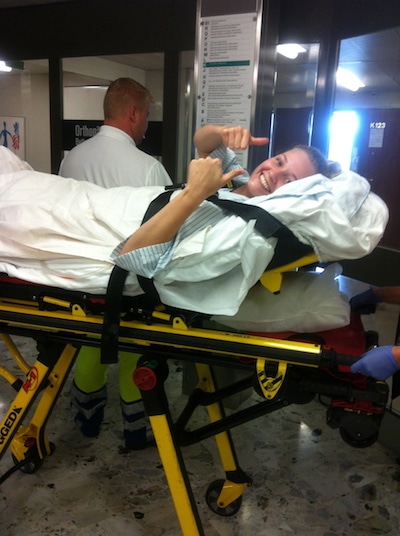 Forever known as the ‘sporty girl’ and self-admittedly someone who cared greatly about her appearance, like many other young women, Carey’s perspective on life, and on herself, was completely turned on its head as the reality began to sink in days later.

“When the doctor said “you will never walk again,” sport wasn’t what I missed at all. I didn’t care if I never could play netball again, or if I could never run again, all I wanted was to be free and not have to rely on a wheelchair or anything to get around.”

After two surgeries, several months in a Swiss hospital, and a further three months hospitalized back home in Australia, Carey was discharged.

“When I got home, it was a massive reality check that I wasn’t better just because I was out of the hospital. I kind of had a feeling that when I left, I’d go back to normal. So it was really hard to adjust to going back to my old life, and not being able to do all the things I used to be able to do. Even just seeing my old friends, it was really weird.”

In need of a fresh start, Carey moved interstate, and it was then that she took her first steps. And while the now-25-year-old still suffers a loss of feeling in her legs, along with multiple bladder and bowel control issues, relying on catheters and enemas to use the bathroom, her disability is something she says no longer fazes her.

In fact, when she talks about that life-changing day now, Carey seems oddly grateful for the new outlook it thrust upon her, in spite of the immeasurable challenges that have come with it. The delicate Roman numerals marking the date of her accident, now tattooed to the inside of her left arm, are a reminder of that. 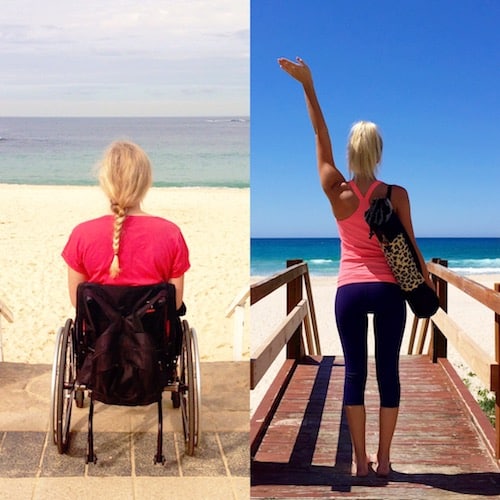 “People thought it was really strange to have such a horrible day inked on my body. At first, I obviously didn’t see it as something good, but over time I realized that it didn’t necessarily have to be a bad day. I could see it as the day I survived when I could of very easily died. And any day after that date is extra bonus time that I couldn’t necessarily get.”

The past five years have been filled with some of Carey’s darkest times, but more importantly, they have emphasized the importance of gratitude and self-love.

“Everyone is getting older and we’re never going to be in our bodies that are as youthful and can do as much as they can now, so I think it’s really important to appreciate and not take that for granted. 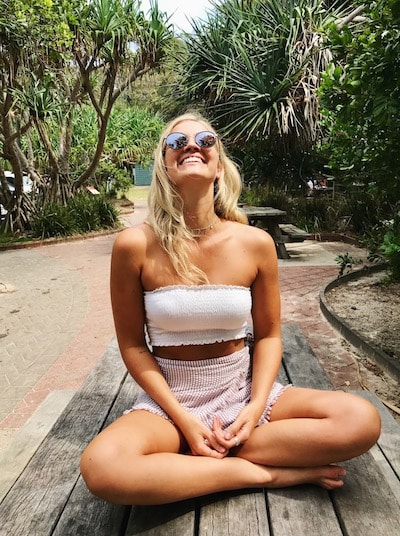 “A lot of young females tend to see their bodies for what they look like not what they can do, and so they have a lot of body image and self-esteem issues. And when I was 20 I had that.

“But then when you are stuck in a hospital bed thinking your legs are never going to walk, you don’t care what your legs look like, you’d just be so grateful that they would work.”

And as our phone call concludes, I can’t help but feel I’ve caught a little of Carey’s contagiously positive outlook and an immovable sense that my own life has been forever changed by talking to her.