I Didn’t Believe In Haunted Houses. Until I Lived In One.

Life is full of unexplained phenomenon. Like the sock that disappears from your washing only to mysteriously reappear dangling from the clothes line weeks later, the person you bump into on the street who looks to be an eery doppelganger of your childhood best friend, or that weird dry patch of skin no amount of industrial strength lotion can rectify. And for the most part, we’re happy to shrug it off as an oddity, however when it comes to otherworldly beings, we’re decidedly more divided.

I was one of the people on the far end of the skeptical fence. To me, ghosts were things that only existed in cheesy horror films and at Halloween parties. That was until I encountered something lurking within the confines of my grandmother’s apartment.

It all began about 20 years ago when I newly married and in search of cheap accommodation to become our temporary residence while we saved for a deposit for our first home. As luck would have it, my grandmother had a small one bedroom self-contained flat located alongside her home and its previous residents had recently vacated. So to help us achieve our goal of home ownership, she gracially offered us this little gem for next to nothing.

Our plans to save and start a family forged ahead smoothly, despite the discovery that living next door to the hub of my family meant privacy was an ongoing issue. When we left our door unlocked it became an open invitation to simply walk in. It wasn’t unusual for my grandmother to remove our washing from the shared line, wander into our tiny home and dump it directly on our dining table.

Being a young married couple wanting to start our life together it wasn’t ideal, but I also knew my grandmother was lonely and felt sorry for her. Having lost her husband of nearly 50 years just prior to us moving in, I’m sure our constant presence on her property was supportive. And we figured it was all a small to price to pay, because we’d finally managed to save money. We estimated we should have a solid deposit within about three years and this became our estimated time of departure. Becoming pregnant several months later didn’t alter our decision. The small flat would simply need to house three of us instead of two.

At the time, my new husband was a shift worker pulling long hours. I’d support him by waking up at 1am to prepare food to take with him each morning, then spend the rest of the night home alone, usually falling back to sleep quite quickly, needing to wake up several hours later to prepare for my own job.

This was our routine until I was about three months pregnant. Being excessively tired, I was no longer able to prepare food in the middle of the night, nor farewell him. Instead, I’d stay in bed and try to remain asleep, which, while living in a confined space, was no easy task. I’d often wake, taking hours to fall back to sleep and it was in these wee hours home by myself that I began feeling like I was no longer alone.

My first night of strange encounters happened when I was trying to get back to sleep after my husband had left for work about four months into my pregnancy. Lying in the dark not long after hearing his car drive away, I was startled by a loud bang which sounded exactly like our bathroom door slamming shut. Knowing my husband had left, I got out of bed to check if he’d left any windows open, perhaps causing a draft to explain the loud noise. 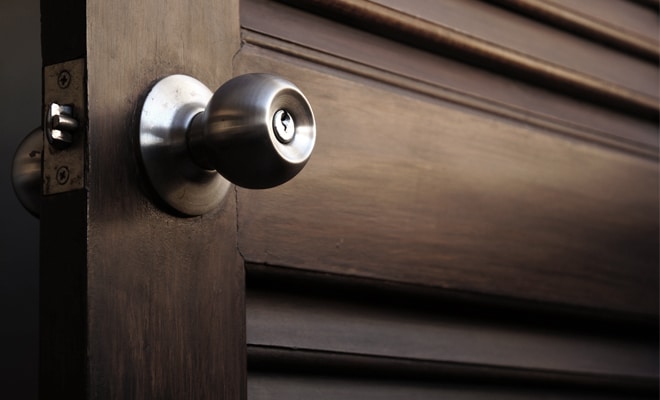 Finding no open windows, I checked if the sound was our bathroom door. Instead, I found the door wide open. Figuring I was just overtired, I crawled back into bed and rolled over to see an odd sight. ‘That’s strange’ I thought to myself. ‘We never leave the wardrobe doors open’. I hadn’t noticed them when I got up to check the bathroom door, and as I began looking more closely at the robe, my eyes adjusted to the darkness and I distinctly saw a single coat hanger swinging unnaturally in complete silence.

I froze, staring at the strange sight, a million thoughts racing through my head. ‘Had someone entered our home after my husband left, and were they playing games with me?’ I watched in utter silence and disbelief for what felt like an eternity. My eyes never wavering from this unusual sight as the coat hanger continued to swing without losing any momentum. Suddenly, without slowing down, it came to a dead halt.

I was startled by a tap on the shoulder. Captivated by what I had witnessed, I hadn’t heard my husband return for his wallet. I screamed in horror.

I told him the details of the mysterious door slam, open wardrobe doors and eery swinging coat hanger.

“You’ve watched too many scary movies!” he laughed, making his way out the door again.

It was quite possible he was onto something. I had a vivid imagination and a penchant for late-night thrillers, so I shrugged it off as an anomaly and went back to sleep.

However the following night the loud banging and strange swinging coat hanger returned. And the following. Until they became a regular occurrence. Then I began seeing the strange silhouette of a figure standing at my bedroom door who inexplicably vanished every time I turned on a light. Finally, I began having an uncomfortably unshakable feeling that someone was with me in the apartment when I was alone.

Then, seemingly confirming my suspicions, one night while my husband was watching a documentary in the living room as I lay in bed watching our other TV, a large framed print fell off the wall in our bedroom, severing the cord of my television. On inspection, the chain to hang the print and the wall mount itself were both intact, leaving no clue as to why the print had fallen, nor how it had severed the cord.

It was getting harder to remain skeptical, but my husband had convinced me I was simply overtired, possibly having weird pregnancy dreams and imagining things.

Then one night my scepticism made way for belief when my friend came over for a visit.

As we sat playing cards she asked, clearly annoyed “Did you just hit me under the table?”

“You did, didn’t you?!” she said angrily. Then right in front of my eyes, she was suddenly knocked from her chair.

Frightened and bewildered by what had just happened, we both fled the apartment and jumped in her car and drove to another friend’s house. Once safely inside, she showed me a bruise visibly forming on her leg where she’d claimed I’d hit her.

This incident left me with no choice but to believe. I was no longer compelled to think I was experiencing weird pregnancy dreams and tired of excusing my vivid imagination. Instead, the mounting evidence was just too overwhelming.

I don’t watch scary movies any more, but I do believe the otherworldly stuff in them really can exist in our world too. Though it’s been years since I’ve returned to my grandmother’s apartment, I’ll never forget the strange occurrences that happened inside those walls that convinced me there really is life on the other side.