The Problem With Christianity

Religion is a battlefield.

If you go by the stringent standards of morality, respectability, and chastity set by the institution of religion, I’m not exactly a shining example of a ‘Christian’.

Don’t get me wrong; I was baptized Anglican and went to a Catholic school. I’ve had a healthy dose of all facets of the doctrine. However, if we’re literally going by the book, or Bible, I do not fit the bill. If I did, I would be more forgiving, more thoughtful, and more tolerant of fools. I would also swear less, screw less, and spend less time judging other people for sins I also commit. On paper, the Christian life isn’t for me, and nor do I want it to be. I simply do not have the capacity to abide by it.

However, there’s a lot about Christianity I find very appealing. Its inherent messages of love, mercy, and selflessness, for instance, as well as its ceaseless devotion to charity, to caring for the outcast and downtrodden, and its vehement spirit of community and togetherness. After all; Jesus was technically the first socialist revolutionary, the first outspoken feminist, and the first public defender of human rights – a pretty good example to live by, I would have thought.

So why has Christianity evolved to become the standardized punching-bag of the atheist West?

I have nothing against atheists. I think their world view is refreshingly logical, and their rejection of archaic dogma in the face of thousands of years of history is pretty damn badass. But from my experience of atheists, they seem to have a real ping-on of a problem with Christianity. And I find it a little weird that a group of people, so insistent they are educated, informed, and enlightened, are so fixated on it.

I witnessed this recently, during a dinner with friends, when one of the girls at my table started teasing another. Not about what she was wearing, or what she’d done the previous Saturday night, but about the fact she was fundamentally Christian. She sneered at the fact this girl went to church every Sunday and insisted upon abstinence before marriage. She even rather unkindly poked fun at the idea of Christian science, saying the two inherently couldn’t go hand in hand. 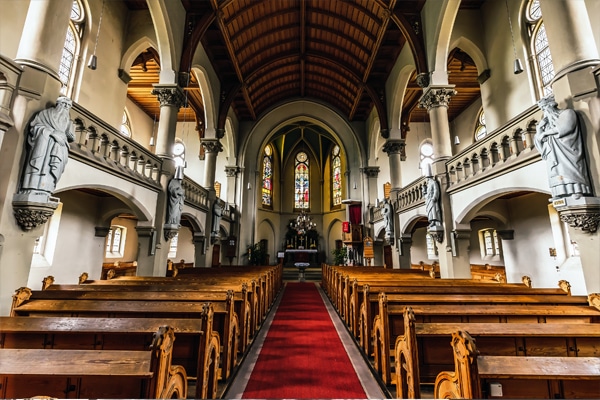 I could see the hurt in our Christian friend’s eyes as she fended off the interrogation. However, she was not the kind of person to pick a fight, so simply put up and shut up. Finally, I could stand it no longer.

“Would you say those things to her if she were Jewish?” I interrupted.

“What about if she were Hindu? Would you say it then? What about Buddhist? Or Taoist? Or Muslim?”

The problem with Christianity is not the fact it’s pillaged and plundered its way through history. Of course it has, big time. But Christianity has by and large reformed considerably over the last century, and continues to do so. It’s also not the fact the faith has been hijacked by a small minority of noisy idiots who preach racism, violence, and rampant, unjustified homophobia.

Mainstream Christians are going blue in the face asserting these extremists do not represent them; they’ve been yelling about it for years. Still, the opposition continues to drive daggers into Christianity, while ceaselessly forgiving Islam for the infinitely greater damage it’s doing on a global scale via its own extremist groups. The ISIS sex slave trade and recruitment of child soldiers make up a rather morbid tip of the iceberg.

As the dominant world religion, Christianity poses a threat; dominant anything is always the first port of call for the gnashing teeth of the proletariat.

There are 2.2 billion Christians in the world today, and they do a hell of a lot of good. Yet their charity, kindness, and meek but constant efforts to develop and modernize their beliefs are gleefully ignored by the self-loathing, self-guilt-tripping extremist Anglo-atheist PC police. And the sad thing is, nobody seems to mind.

All theology should be questioned, but none should be callously dismissed as outdated or dogmatically incorrect. Religion in general, if applied correctly, is a force for good. So why, in a world where so much is going wrong, would we clip the wings of anyone or anything hell bent on making it right?