The Shooting Of Harambe The Gorilla Proves How Senseless Humans Are

Are we really any better than those we call beasts?

The last thing Michelle Gregg and Deonne Dickerson expected when they took their three year-old son to the Cincinnati Zoo last week, was to end up splashed across national headlines.

Somehow their child crawled past the boundary for the gorilla’s cage and ended up in the 16 year-old endangered silverback’s clutches. While the gorilla, known to the zoo as Harambe, appeared to be protective of the child, he also dragged him around in what was perceived as a ‘violent’ manner. Fearing for the child, a special response team at the zoo shot and killed Harambe on the spot.

There have been plenty of articles talking about whether or not this was the right call or not. Some claim that it was necessary to save the child, others say the parents should be held responsible for not keeping an eye on their young child at the zoo.

I personally wonder why a lethal shot was required. Does the zoo not keep tranquilizers on hand for emergencies such as these? It seems like this is a case that can teach us all plenty of lessons, and the most depressing one, is maybe that human beings are kind of awful.

There are plenty of reports of murders across the country each year that are deemed tragic accidents. A roommate comes home late unexpectedly and their armed friend shoots them, confusing them for an intruder; we shoot dogs who attack strangers, even though all these dogs are doing is protecting their owners; we make snap judgements in milliseconds that come from that lizard brain we all possess – the part of us that’s still built on fight or flight – and we put laws into place that protect our actions when we’re under this influence. I’m honestly not sure if that’s a good or a bad thing. 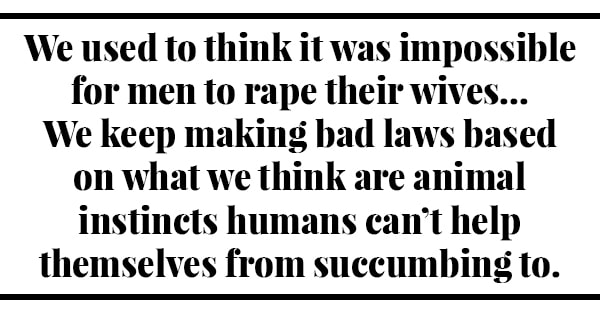 Is it understandable? Of course. As someone who identifies as a pacifist I often sit and wonder what I would do if I were under attack. Would I fight back, even though physical violence goes against my moral code? Possibly. It gets even more complicated when I think about people I love – would I be willing to watch them suffer if I had the ability to do something about it? Probably not. I can certainly understand why someone might make that split second decision to hurt someone else to protect themselves; it’s what millions of years of evolution have taught us to do.

It’s interesting though, isn’t it? We spend a lot of time thinking about how superior we are to most animals, but when it comes to the most essential of actions – life or death choices – we seem content to not only rely on our animal instincts, but to protect them legally. If I shoot an intruder who happens to be a family visitor I wasn’t expecting, it’s a tragic accident and the law provides loopholes to keep me from being charged with murder.

And it’s a slippery slope. Though blessedly no longer considered a legitimate legal defense, gay panic used to be reason enough for a man to kill someone who was attracted to the same sex and not have it qualify as a hate crime. In some cases men murdered self-identified gay men and were exonerated because a jury of their peers really thought it was completely understandable that a man would shoot another man who hit on him.

We used to think it was impossible for men to rape their wives because wives were required to submit to their husbands. We keep making bad laws based on what we think are animal instincts humans can’t help themselves from succumbing to, but given how many of these laws have later been overturned, we have to consider how many of these base instincts really are uncontrollable.

If a woman walks by in a short skirt in a dark alley alone at night, does a man have the right to rape her so long as he can prove his instinct to have sex with her was overwhelming enough? If not, why is it okay to kill someone if our instincts to do so are just as strong? And what do we do about it when we’re wrong?

How superior are we, really? Can we really say we’re better than beasts when we proudly imitate them when it comes to acts of violence?

Perhaps the best lesson when have to learn from the tragic death of Harambe, is that any one of us could be in his position, stuck in the sights of a man with a gun who makes a split-second decision that we deserve to die. And whether right or not, the person who pulls the trigger may face the same consequences we’ve so often imposed on those who’ve committed similar acts of needless violence in the heat of the moment: nothing.

Comment: Do you think the zoo overreacted by shooting Harambe the gorilla?