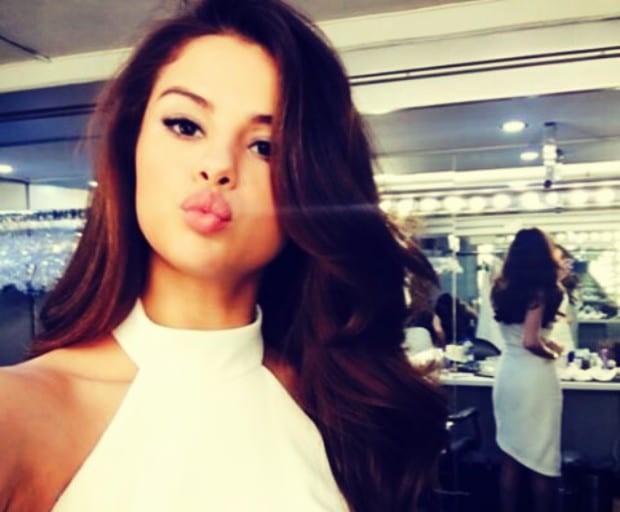 Girl, we’ve all been there.

Selena Gomez is gorgeous, successful, and has 114 million Instagram followers. Most of them seem to adore her, leaving comments like “beautiful” and “love you forever” – but that doesn’t mean Gomez is immune to getting upset over the nastier ones.

In an interview with the New York Times this week, Gomez said she does actually read the comments on her Instagram feed, and admitted they often get under her skin. “You can’t avoid it sometimes,” she explained, adding, “I delete the app from my phone at least once a week.”

“Imagine all the insecurities that you already feel about yourself and having someone write a paragraph pointing out every little thing — even if it’s just physical,” Gomez said. “You fixate on the [negative] ones. They’re not like, ‘You’re ugly.’ It’s like they want to cut to your soul.”

Gomez, who is in the midst of promoting Thirteen Reasons Why, the upcoming Netflix series she executive produced, has dealt with her share of social media drama. Last year, she and former flame Justin Bieber got into a public spat on Instagram that led to Bieber briefly deactivating his account. And when Gomez recently jetted off to Italy with new boyfriend The Weeknd, his ex Bella Hadid publicly unfollowed Gomez on social media.

It’s no secret that social media can play havoc with your intimate relationships, but Gomez says it’s been terrible for her own mental health as well.

In this month’s Vogue cover story, Gomez said she “freaked out” when she became the most-followed person on Instagram last year. “It had become so consuming to me. It’s what I woke up to and went to sleep to. I was an addict, and it felt like I was seeing things I didn’t want to see, like it was putting things in my head that I didn’t want to care about.”

Ok freaking out a little. Thrilled to share my first American @voguemagazine cover with you! Read the story and see the full spread in the link in my bio. Photographed by @mertalas and @macpiggott

That’s why lately, Gomez has taken a step back from social media, outside of her professional obligations.

“I always end up feeling like shit when I look at Instagram. Which is why I’m kind of under the radar, ghosting it a bit.”

Selena, girl, we feel you.

Comment: How do you deal with mean comments on social media?

I Confronted The Guy Who Ghosted Me. Here’s What Happened.

The Moment I Realized I Was Good Enough