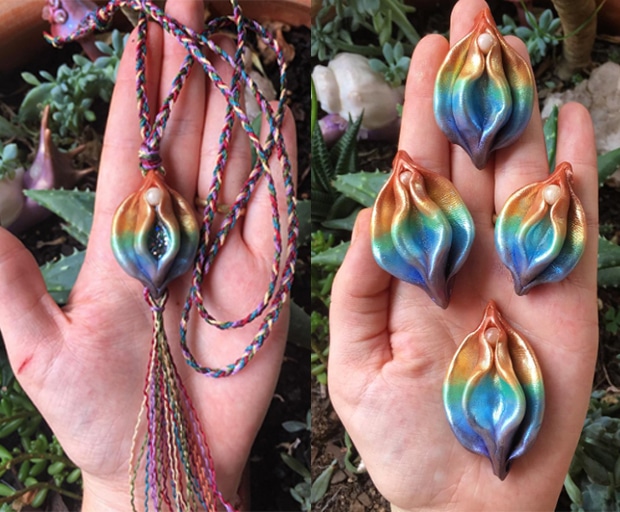 Why Too Much Chemistry Can Be Dangerous

We’re forever being reminded of men’s genitals. Whether it’s having our phones assaulted with unsolicited dick pics, hearing guys boast about how big their member is, or standing next to a dude in line who has an itch and doesn’t care who sees him scratch it, it’s pretty socially acceptable to highlight the fact you have a penis.

But making noise about owning a vagina? Not so much. In fact any discussion at all that hints at the vag is generally looked down upon. We’re so secretive about our lady parts for fear of offending anyone with sheer utterance of their existence that most of us don’t even have a clue what an actual normal vagina is supposed to look like. It’s kinda embarrassing.

Thankfully Instagram celeb and artist Emily is putting a stop to that, one vagina-inspired necklace at a time. The self-confessed hippie, who runs an online store selling crystals and pendants crafted into beautiful, mystical artworks and accessories, recently started putting her craftsmanship to use creating unique pearlescent pendant necklaces designed to look like vaginas.

The one-of-a-kind pieces, which have a mythical, galaxy-themed look and have been deemed ‘yonis’, have been so explosively popular since the artist began selling them that there’s already a waitlist for the next exclusive batch.

‘I have received a huge amount of DMs and Etsy messages regarding yoni pendants, so many so that I can not possibly reply to everybody!’ the artist posted to her social media this week.

‘I am working on a shop update where I will have several styles available, it looks as though it will be in a week or so. I will announce here and share some pictures.’.

One down three to go ✨?✨ I’m making a listing for these galaxy yoni necklaces right about now ✨ only four available at this point ✨ #galaxy#yoni#yoniverse#moonstone#peachmoonstone#necklace#tassel#yonipendant#galaxyyoni#chakra#macrame#crystalclit#galcticyoni#vaginaart#rainbow#onelove#sparkles#crystals#crystalhealing#feminine#magic#mystical#magical#lightworker #magic #loveandlight

Part art, part statement and part killer neck candy, the feminist necklaces illustrate the raw, magical beauty of the female body whilst removing the stigma from vagina talk in the same way comedian Amy Schumer did brilliantly when she talked about her tampon on the Emmys red carpet last year.

And given their popularity, there’s obvs a serious niche in the market for more of this kinda thing – because who wouldn’t want to display the symbol of their goddess power around their neck??

We kinda want one.

Comment: What do you think of the necklaces – love them or hate them?

6 Things You Need To Stop Putting In Your Vagina, Immediately